DuncanHorse, Vaccines, and Enough is Enough

Enough is MORE than enough.

I have a dog whose life changed after his final puppy shots (ConneryBeagle).  It started immediately, but it took us a while to understand the full ramifications…the autoimmune issues leading up to his third year, when the vet who had kept him alive also grimly suggested that I prepare to lose him early.

That Connery is still alive at 8 1/2 is beyond everyone’s expectations and due to extensive and intricate care–there’s a reason I have a fundraiser book for his medical expenses, and a reason I’m running my car into the ground rather than replacing it at its age.  And there’s a reason he’ll never get another vaccine.

Things came on more slowly with Duncan.  Last year, he struggled after his yearly floating and shots.  Both his  vet and I thought it was his effort to adjust to his “new” teeth, since the previous vet hadn’t compensated for his missing molar, and that meant a significant amount of mouth work this time around.

This year, Duncan had a normal floating with his shots…but he clearly didn’t feel well in the days following the vet visit–and besides that, he was being plagued by bugs, with welts the size of which I’d never seen on him before.  I put him on colic watch, I cajoled him to eat with nummies and special feeding routines, I rubbed on new fly spray and I thought he was coming out of it.  Even when he woke up one morning with thick pasterns, I wasn’t too worried–he’s stocked up before with changed feeding routines (alfalfa, that devil hay!).

But he got more swollen, and more…and suddenly his skin was oozing in various places where it runs thin.  His belly was bloated, his head was hanging, and he didn’t want to move at all.  It happened very quickly once it started, in the course of a a late afternoon/evening.  (FRIDAY, of course.)  It was then that I realized the bizarrely reactive bug bites were part of the whole picture, and then that I realized he was in a full-blown immunological reaction from the shots–and that the stocking up was in fact vasculitis.

I was lucky.  Patty (of Friday’s Write Horse blog feature!) responded to my “What the heck?” from earlier in the day, and as things developed into Friday night, offered some meds until I could reach the vet.  Within five hours, he was a different horse.  In short order I got a stamp of approval on treatment.  Another forty-eight hours and it became evident how many little things from the past week–things I’d been trying to resolve piecemeal–were part of the vaccine reaction.

That was more than a month ago.  It’s taken several courses of treatment, a completely new feeding regimen and supplements, additional consultations, and lots of horse hugs–but he’s finally starting to put muscle and weight back on.  And he didn’t get laminitis, although I’m still watching for signs of trouble.

The week before his shots, Duncan looked like a 15yo horse instead of his 21 years.  Now he looks a decade older.  I’m told he’ll recover; it’s going to take a while at this age and he may never be what he was before it happened, simply because of his age.  It’s hard for an old boy to come back from something like this, although a Lipizzan at 21 is still generally an active, athletic creature. 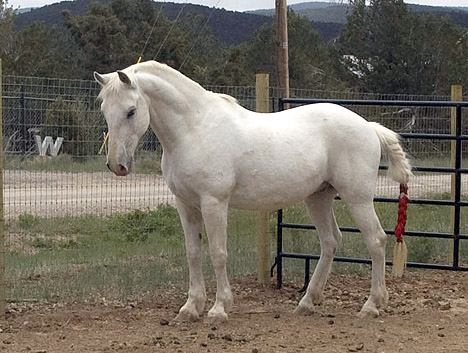 Yes.  Because who funds those studies?  Who decides the parameters of the studies?  The vaccine people, that’s who.

And I think part of being sensible is not letting the vaccine manufacturers define what IS sensible.  Do puppies need their shots that close together?  Do they need that many?  Do horses and dogs needs shots every single year? Do they really?

I don’t think so.  I think in this single household, I have two animals who have suffered for trusting what the vaccine people say is necessary…and assume is safe.

Now I make the best choices I can, consulting vets, doing research, and knowing that for Duncan–for Connery–shots are no longer life-saving at all.  And believing that it didn’t have to come to this for either of them.

What do you do about shots for your critter kids?

My books are SF/F, mystery, paranormal romance, and romantic suspense. My dogs are Beagles, my home is the Southwest, and the horse wants a cookie!
View all posts by Doranna →
This entry was posted in DuncanHorse and tagged dogs, Duncan, horses, Opinionated. Bookmark the permalink.

19 Responses to DuncanHorse, Vaccines, and Enough is Enough