The fire season is coming on early, dry, and hard, so I’ve been working as I can on the arroyo fire clearing project (which is much bigger than I am any way you look at it).

Last fall I addressed the overgrowth along the back of the barn and paddock. Some of the cuttings went to a wood ministry, and some went into chippings.  Along the way I learned that it’s possible–if time consuming–to break major branches down into component parts and disperse most of the parts over the property.

I’m currently focusing on Arroyo Minor, which is behind/below the house and inside the pasture fence.  This is the area through which a fire would most naturally track.  Even before we lost a handful of major trees to drought last year, it was a huge job.

So for starters, I’m trying to get the worst of it.  Deadwood out.  Ladder fuel trimmed up.

I feel bad about the amount of pruning, but the truth is that had we humans not interfered so deeply with this land, the natural ebb and flow of beasties and fire would have been here before me.  The challenge in moving forward is the interdependency of some of these species.  So many of them, like the piñon, skunkbush, and wee little contorted oaks depend on junipers for cover to get started.

In the end, I’m aiming to leave enough shade, ground cover, and erosion control while creating  enough space between bunched growth and ladder fuel elimination for fire safety.  In the process, I take the cuttings down to the smallest branch.

The smaller bits go to generalized and specific erosion control, while a certain number of juniper cuttings are piling into the gaping gulch at the edge of the fenceline to slow that water flow in case we actually get monsoon rains ever again. (insert climate change sarcasm)  The straighter branches line the bottom of the fence where the miserable installation left big gaps.  Not dog proof as intended, no indeed.

All of this slows my progress considerably.  But it’s best for the land, and it’ll minimize expenses, and it doesn’t leave too many huge looming piles of vulnerable brush crying out, “Burn me!  Please!” Eventually we’ll have to haul stuff to the transfer station where it’ll be shredded by Star Warsian machinery to serve as mulch for others, but until then…. 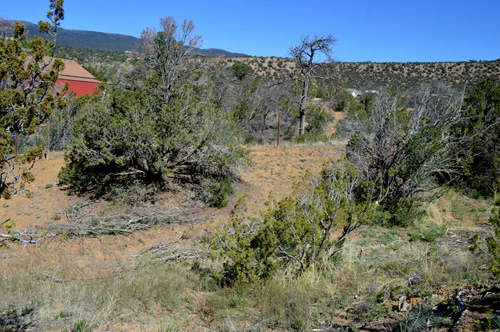 The current project after the first work session. You can tell where the ladder fuel branches, dead and otherwise, used to reach by the color of the soil and the little border of cut branches. You can also see the big dead pinion in the middle. (There are a total of seven dead pinions in that cluster.) 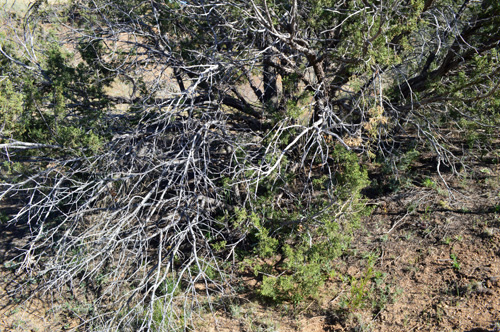 Here’s what it looks like on the other side, where I haven’t started yet. Looked like this all around, at first. 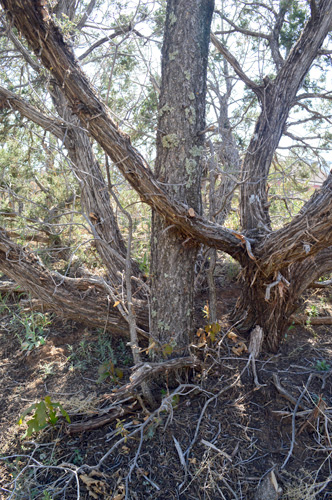 The interior of the cluster after three lengthy clearing sessions–about half done, but now I can duck into the central trunk area. That’s the big dead pinion in the center. Must go… 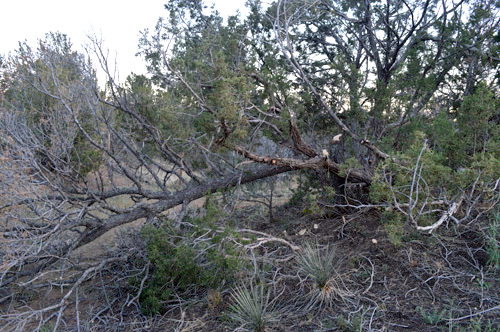 Timberrrr! Me and the bow saw. Dropped it right into the narrow slot available for a clean fall! Boy was I smug. 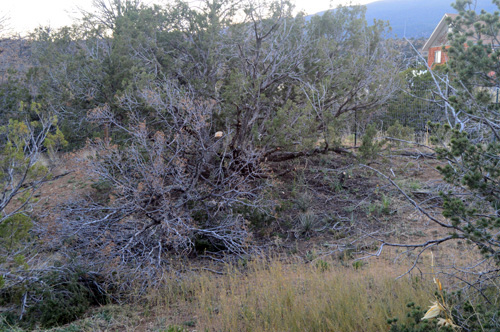 Of course, now the dead crown of the felled pinion is the best fire fuel you can imagine, right there in the central fire zone. 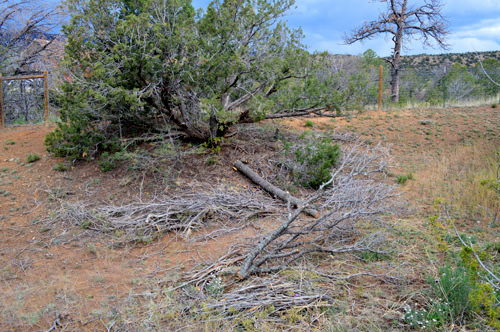 Slowly working it down, branch by branch… 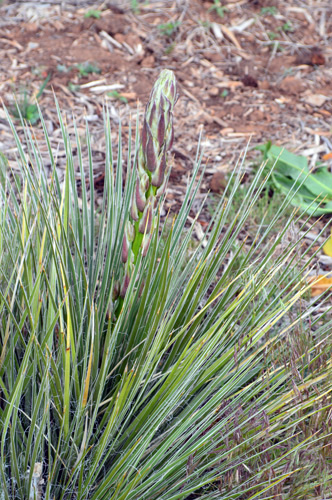 Looks like we’re going to have some gorgeous yucca blooms this year! 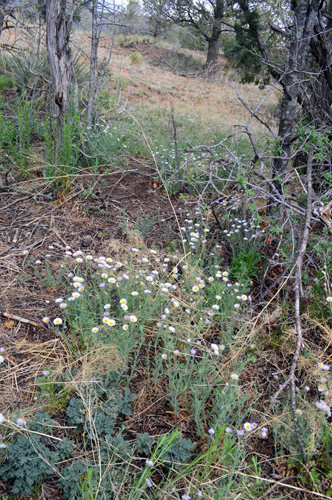 Fleabane down in the drainage area of Arroyo Minor 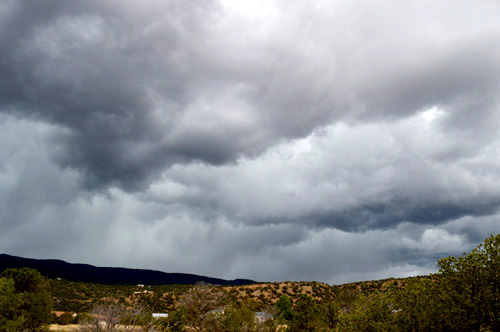 On my way out to capture some Santa Fe Phlox from Arroyo Major–a beautiful little fuchsia ground flower. Got to race some incoming weather. Add thunder rumbling to this sky… 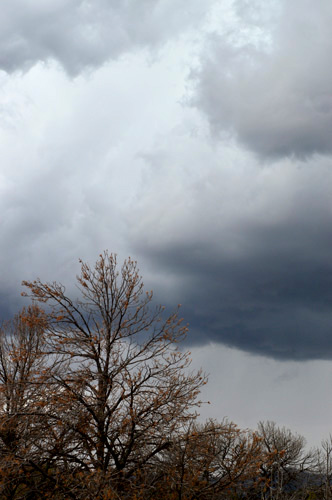 Still on my way out to grab the phlox. This picture is my idea of climate change irony. 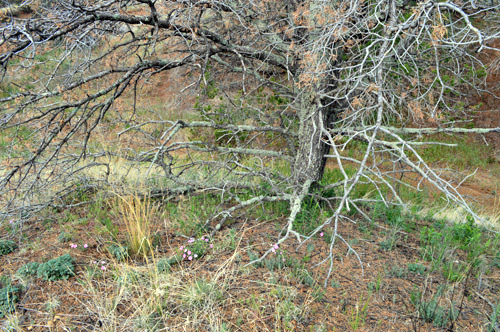 One of our few ponderosas, now dead. It used to shelter the phlox…thus my concern for it, and my attempt to save and nurture some of it. You can see the little pink phlox flowers peeking out and about beneath the tree. 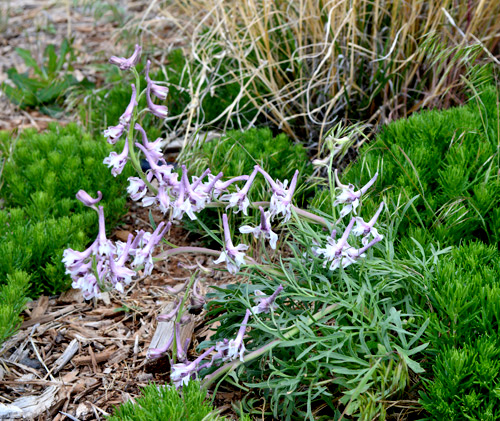 No phlox pictures, because it started raining and I planted it so the single flower faces away from view (it made sense for other reasons!). But here’s my mutant Organ Mt. Larkspur, replanted several years ago from the north flat where I ride. It’s doing well! 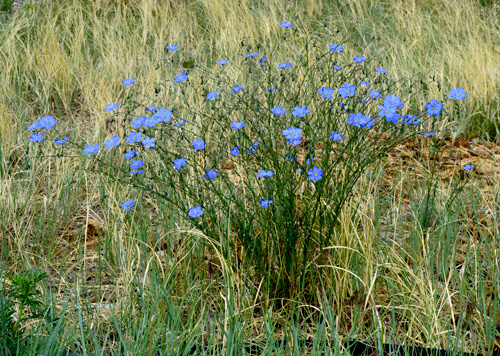 And here’s the blue flax, which is thriving this year!

And we’ve had an inch of rain over the weekend, which should keep the downed piñon from bursting into spontaneous flame for a while.  RAIN, I say!  I wonder what flowers will come up next?

My books are SF/F, mystery, paranormal romance, and romantic suspense. My dogs are Beagles, my home is the Southwest, and the horse wants a cookie!
View all posts by Doranna →
This entry was posted in The Arroyo and tagged adventures, arroyo, land, New Mexico, weather. Bookmark the permalink.