It should be, in some fashion, totally illegal for a sky to taunt the way ours has of late.  Especially when we’re going on three years of drought, with no measurable precipitation in the past 8 months.

(That means it might threaten and it might spit random drops, but those dry up pretty much before they even hit the ground.  Even now, it’s rumbling thunder in the background of a dark, dramatic sky, but that only means chances for lightning-strike fires.)

Well, Mother Nature being who she is, we’ve seen plenty of drama skies and nothing by way of…you know…rain. Damaging wind storms, yes; amazingly unseasonal cold snaps (12F in early May), yes.  But the wet stuff, no.

I know that other parts of the country are moldering away, overflowing, and aching for sunshine…but after three years, we’re drying up and heading toward blowing away.

It’s not a case of discomfort or inconvenience.  It’s trees weakened and dying, forests vulnerable to beetle damage, flowers losing permanent ground to invading foreign species…birds no longer seen and bears moving in on people.  It’s loss of variety, loss of species, loss of grassland–and for ranchers, potential loss of a way of life.

And if you think that doesn’t matter to you, you’d be wrong.  It all matters.  The world is robust and resilient, but once it reaches the point of going past resilience, it just plain breaks.  And since we live in the world, that matters to all of us.

(Another way it matters to us, for anyone who did not mourn the passing of predators from our land, or the imbalances we’ve created in nature?  Check this out:

According to parasitologists, 2013 will see an explosion of tick populations in many areas of the U.S…Two types of ticks are especially problematic: the deer tick, also called the black-legged tick, and the Lone Star tick. These ticks have now invaded about half the U.S., and in many states both are present. Together, these species are associated with nearly a dozen tick-borne illnesses, including Lyme disease, ehrlichiosis, anaplasmosis, and babesiosis.”

Irony for me, as I try to deal with the long-term-unto-chronic Lyme disease already in my life.

I hope those of you getting all those rains, and all those awful storms, find relief in your weather, too.  But if you’re like me–even if you’ve been a flower child all along–you’re finding yourself more and more inclined to make resource management decisions as if they matter in the big picture.

Coincidentally, in my email today: 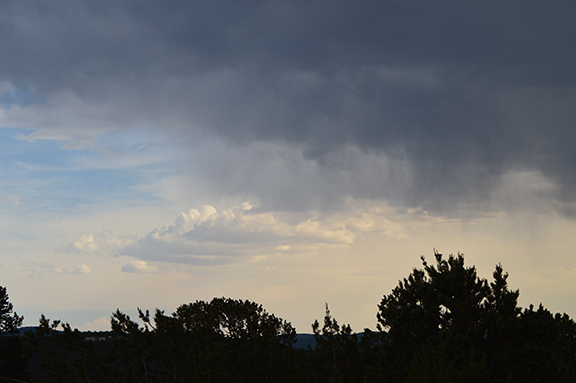 The front edge of the most recent storm. Virga at the right edge (a column fierce rain that doesn’t make it all the way to the ground). 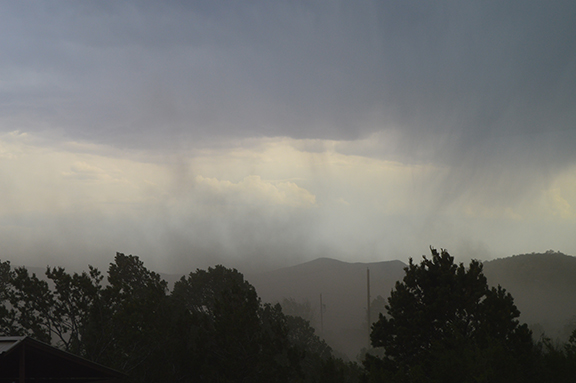 A scary moment when the dry storm front hits, bringing a ground-level cloud through at high speeds, with more virga to the right. 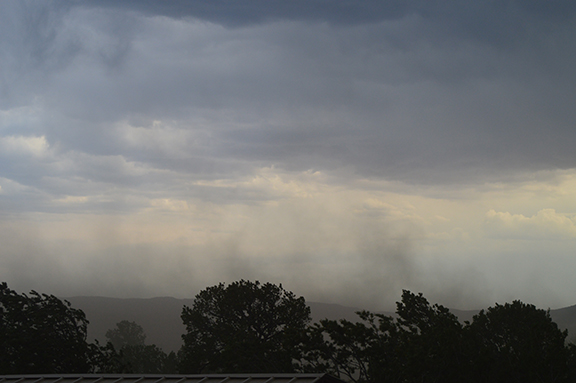 Still blowing. Didn’t leave any wet stuff behind, though. 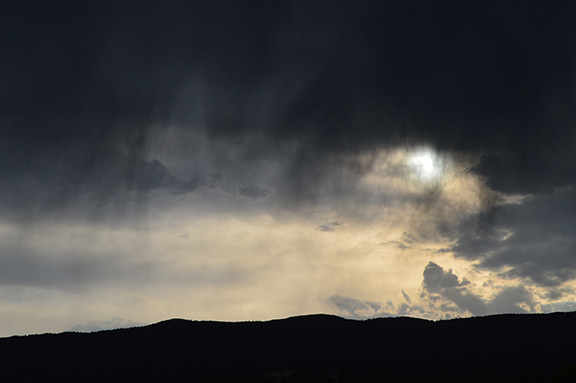 After which it just got dark and threatening.  With more virga. 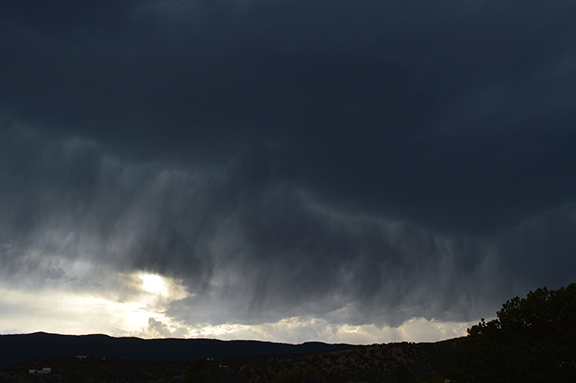 My books are SF/F, mystery, paranormal romance, and romantic suspense. My dogs are Beagles, my home is the Southwest, and the horse wants a cookie!
View all posts by Doranna →
This entry was posted in Behind the Scenes, Land Keeping and tagged land, Opinionated. Bookmark the permalink.

8 Responses to The Taunting Sky