————
(note from Doranna–I swear, we had no idea we were both addressing the weather this week!  We usually address such diverse topics, there’s no need to coordinate, so…surprise!  In the end, rather than scramble for a new bloggy arrangement, we decided to leave things as they are.  If nothing else, it underscores the significance of this drought, and how it’s affecting us all.)

I drained 600 gallons of water onto the ground yesterday.

Of course I had Help.

I’d threaded a hose through the fence into one of the big 640 gallon tanks, pulled the handle up on the frost-free spigot, and went to the arena for a lesson.

When I came back, all four youngsters  (Lacey, Longshot, LT and Toots at her usual two body lengths) were gathered around the tank on the north side of the fence and Stetson was standing in the mud on the south side.  Stetson was calm as a clam at high tide, trying to pretend that he’d had NOTHING to do with it, but the hose was out of the tank at his feet.

His lips somehow got wrapped around it.  Suddenly, water was gushing onto the ground and into the drainage arroyo that runs through the back pen.

“gosh what fun! how lucky the hose is going right through my pen!”, Stetson said.

Apparently, the games began almost as soon as I was out of sight because the tank was still nearly empty, and I’d been gone well over an hour.

You’d think that 600 gallons might actually flow somewhere, but the ground is so dry that the water pooled in a low spot and was sucked into the earth in a few hours. By morning, it was just a humid memory.

The last 36 months have been the driest ever on record in NM, though several years previous were not flood years.  For example, the runoff in the Pecos Basin for 2013 was 1% of the 30 year average (the lowest ever).  The second lowest ever was in 2011.  2012 was far below average as well.

In addition, percent of annual precipitation  due to snow has decreased over the last decade, normal summer monsoons have been sporadic and temperatures have been increasing.

All the reservoirs in the state are at record lows.  Recovery will take years.

We have a well.  We (supposedly) have a lot of ground water in our area, which is geologically unusual and has three very different water tables within about one square mile.  Unfortunately, our water, although potable, it tastes terrible.  In addition, it is becoming siltier (we have a filter) and there is a now a marked sulfur smell.

We don’t drink it, and we have water collection systems set up (gutters dump into tanks) so that the horses don’t have to drink it either–in normal years.

This year, the horses have no choice.

(Nevertheless, Some Horses (Stetson) still like to play in it.)

The New Mexico flood irrigation season that normally runs from 1 March to 31 October, started late this year in some water districts, and all are ending early.  Some are done this week.

Since my Spousal Unit works for the Bureau of Reclamation, he knew how things were looking and advised me to buy hay as soon as possible.  In February, I contracted with a grower in Moriarty, NM (20 miles from here) that pumps ground water.  I ordered and paid for 600 bales at nine bucks a bale, delivery included (300 grass mix and 300 alfalfa).  So, barring some natural issue like uh rain on cut but unbaled hay, I should soon have a full barn and will be able to feed five horses through summer 2014.

Hopefully, I will have fewer than five to feed (cuz did I mention that some are for sale??!)

Here are a couple pictures. 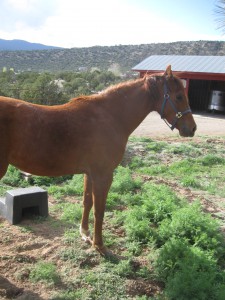 Look, grass! April 2010. (This horse is named  May and she was my very first blog subject, just before I became the Friday Special on WordPlay!)

Kochia weed was six feet tall in late summer 2010–could not find the picture!! 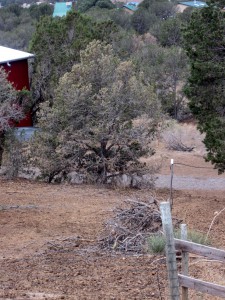 June 2013. It is so dry we don’t even have weeds. Trees, especially pinons are dying. “If it gets any drier the dirt is gonna catch on fire.”

Up near Chama, where we had cattle in 2011, precipitation was the best in the state. Still is, but it is all relative. NM is the bottom right state (5th largest i n the U.S.) and in the worst shape in the country.  The Chama area is the top of the state where the drought is “only” extreme. 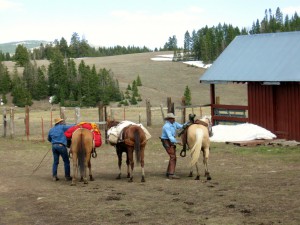 May 29, 2011. Note the snow and the muddy tracks. Water was running underfoot. 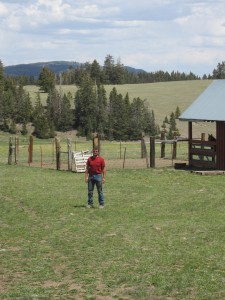 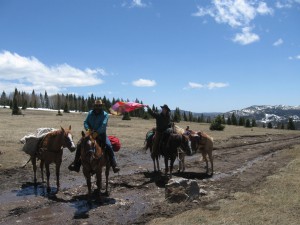 May 30th, 2011, up near the top gate. Note how wet it is and the snow in the back ground. It was too wet and snowy to drive in, so we were the first back in there for the season, since we had all terrain horses. (one of my all time favorite trips) 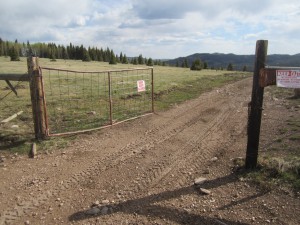 June 4, 2013. No water.  No snow.  Plenty of tire tracks this year. That grass hardly has a chance unless we get some rain.

The long term forecast is for little rain at least until August–the monsoons which used to begin on July 4th, like clock work, are unlikely to be strong.

It is time we stop channeling the Gran Desierto with its 1-2 inches of rain per year, and get back to 8 or so for Albuquerque and 12-16 up the mountain where I live.

Here's the skinny: I have a thing for horses. They make sense to me. I have a small horse training business (it's a "boutique" training business, not because it's super fancy, but because the horses get a lot of personal attention). I also go by Dr. Wilber, and teach biology full-time at a Central New Mexico Community college.
View all posts by BlogPatty →
This entry was posted in The Write Horse and tagged horses, land, New Mexico, The Write Horse, weather. Bookmark the permalink.

8 Responses to Drought, no Doubt