ConneryBeagle has a Twitter feed (Because of course he does.  That boy has been online since the day he came home with me).   He doesn’t tweet religiously, since I rarely give up the keyboard, but he likes to talk about his adventures.

Over the weekend he did that, after an adventure with the horse.  And because there were questions…here’s the rest of the story!

DuncanHorse has a paddock inside our fenced pasture area. 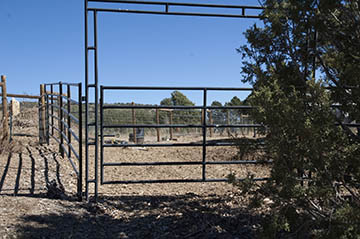 Looking up at the paddock gate from inside the pasture

Unfortunately, of the three summers we’ve been here, he’s only been allowed out on the pasture for the first summer–that’s the drought in action.  I’ve got to protect what is, in fact, a terribly fragile soil/flora/fauna area.  (Things die; they don’t come back.  The land erodes in a heartbeat, which is how those deep arroyos ended up in the back yard to begin with!)

When I care for Duncan, I often go from the office to the back yard to the pasture to the paddock.  (Wee gate between yard and pasture, visible above; horse gate between pasture and paddock.)  If you watched Monday’s video, I’m standing at the yard gate when it starts, and at the horse gate when it ends.  It’s a lot more straightforward than it sounds.

Well, the horse gate is a pain in the ass.

It has this horrible sticky bolt latch that has to fit into a rather small hole, and it does this with a big clang and clatter–and aside from the annoyance this is never, ever good for someone who fights migraines on a daily basis. 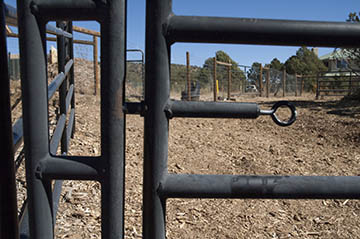 Horrible sticky gate latch in proper position. Cannot believe I paid money for this one!

So generally I don’t latch it.  The gate is on a slope, and it’s heavy–really heavy, I can assure you, as it took 3-4 people to move that panel–and it stays closed by itself. 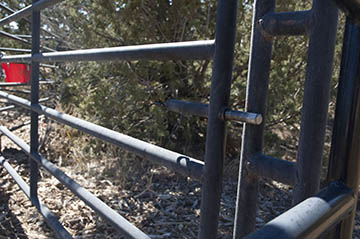 A view from inside the paddock (well, through the corral panels, which is a bit tricky. And the lighting sucks. But darnit, you can see the latch!)

There’s those 3-4 times a year when the wind catches me by surprise and blows that gate open.  Uphill.  Have I mentioned that the wind gets pretty fierce around here?

Then, if I’m not quick enough, Duncan has some pasture time.  It’s not a huge issue except that unless I grab him close to the escape point, I have to clamber around Arroyo Minor to get him, and this is never good in the middle of the night, which is usually when this happens.  Also, it makes me wince for the land.

One of the reasons it rarely happens is that the wind usually bangs the gate a couple of times as the gusts build, and I hear this and trot out and latch it for real.  Also, the gate really doesn’t move that easily.  I go through it several times a day and I open it from horseback, and I can attest to this in spades.

Well, guess what.  The gate was also intensely squealy.

SO I LUBRICATED IT.

Suddenly the opportunity for escape seems to have increased considerably.

So on Sunday I laid tracks for the dogs, and Connery’s track wound through Arroyo Minor, starting near the big pasture-road gate on the north flat.  When I do this, I leave that gate open from the time I lay the track to the time Connery runs it.

So you see this coming, right?

Halfway through the track-aging process, I heard a  gentle “snortsnortsnort!”

DuncanHorse: I am out in the pasture and I like it!

1) Run out to chase him down and wreck the half-aged training track.
2) Leave him out there to interfere with the track in his horsie way, and whip out the other side of the house at warp speed to close the open gate.

So Duncan moseyed around the pasture, tromping hither and yon, and then hung around the start of the track.  We pretended he wasn’t there and ran the track through Arroyo Minor, after which I removed Connery’s harness so he could do his own moseying while I convinced Duncan to return to Home Base.

Duncan knew where he was going and didn’t really want to go there.  Connery knew where Duncan was going, too.  So he put on his herding dog clothes and escorted Duncan there.  Not applying pressure as a herding dog would, but being present.   All business-like, trot trot trot, gently holding the outside of the curve.  And oh, his upright Beagle tail waved happily and his panting had a big grin in it.

Yes, Connery.  Yes you were.

And that was ConneryBeagle’s big Sunday adventure–tracking around the horse, and then being very important as he helped return the horse to his paddock.  Not much in the grand scheme of things, but it does so make me smile to see him that happy.

By the way, this is what the gate looks like now… 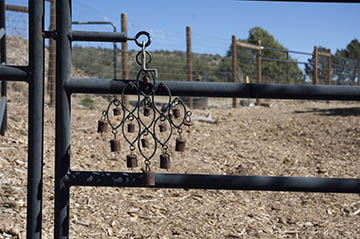 (Have you closed all your gates?  Latched all your doors?  Turned off your iron…?  Mwah ha ha!!)

My books are SF/F, mystery, paranormal romance, and romantic suspense. My dogs are Beagles, my home is the Southwest, and the horse wants a cookie!
View all posts by Doranna →
This entry was posted in ConneryBeagle, DuncanHorse, Land Keeping and tagged ConneryBeagle, Duncan, land. Bookmark the permalink.

13 Responses to The Herding Beagle