I’ve finally figured out the big secret to feeding Duncan.

It wasn’t any single discovery…it was sixteen years of observations coming together at year twenty.

In the meantime, after the first colic, I started soaking his hay a few moments before he ate.  I didn’t soak it longer, because I had read that the hay loses nutrients in that case.

About six weeks ago, I read (in the online source The Horse), an report on a scientifically conducted hay-soaking study.  And it turns out that lengthy hay soaking doesn’t reduce the nutrients per se.  It reduces the sugar. 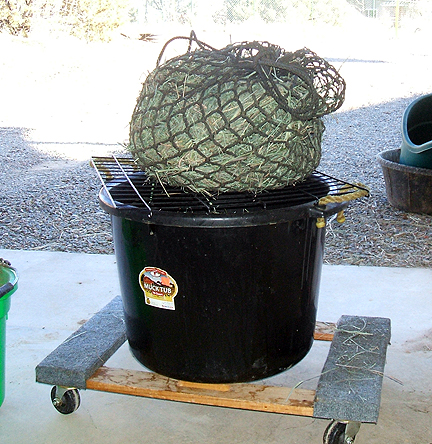 So, sez I upon reading this study–great!  I must try longer soaks, because I don’t care if my air fern gets less sugar and the grass will soak up more water.

Now, one of the things that changes pretty significantly between hay cuttings and even hay bales is the amount of sugar in the grass.  Environmental circumstances during grass growth, how long it lays after cutting…blah blah blah.  There’s no easy way to predict it, and you sure can’t tell by looking.  And if my air fern were off grazing as horses evolved to graze, he wouldn’t be facing these abrupt dietary changes.  He’s not a digestive hothouse flower so much as he is displeased with the changes man has wrought to his manner of eating.

Do you see this coming?  He hasn’t had a digestive upset since I started doing soaking the hay.

Not that they came so often that it was obvious at first.  But a siege of bad weather and blanketing drove the point home.  And not that it’s easy.  It means an elaborate set-up in the garage, hay strewn where we don’t want it, and–wuh–hauling nets of soaked hay down to the barn.  But we’ve gotten it down to a pretty good science at this point, and after all these weeks, I am still smug–SMUG, I tell you!–to have stumbled over the food management that overcomes issues old and new.

So we’ll continue to refine the soaking routine, and I’ll probably feel smug for a good long while, and meanwhile, just for fun, here are some Photos of AWWWness. 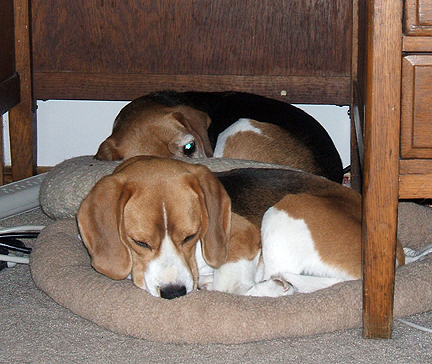 I was going to 'shop out Connery's evil glowing eye, but decided...nahhhh... 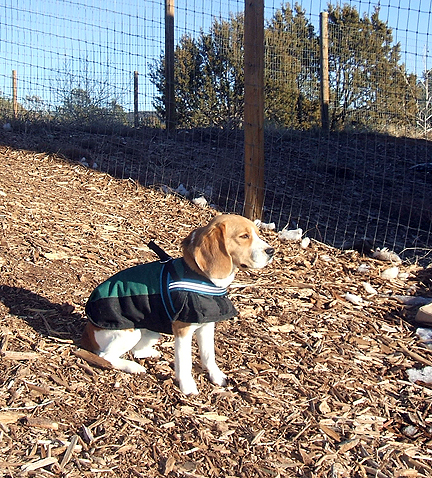 For those of you who wondered about Dart's outfit for the Weather on TD test day... 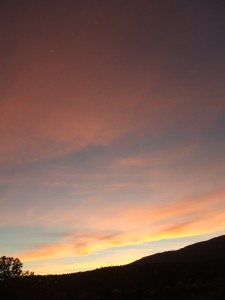 A sunset and crescent moon in the same pic. Can't see the moon? Clickie the piccie...

My books are SF/F, mystery, paranormal romance, and romantic suspense. My dogs are Beagles, my home is the Southwest, and the horse wants a cookie!
View all posts by Doranna →
This entry was posted in ConneryBeagle, D'Artagnan Beagle, DuncanHorse and tagged barn, Duncan. Bookmark the permalink.

5 Responses to Go Soak Your Hay