DuncanHorse is not going to appreciate this blog.

Duncan: Litterbox!  I heard that!

When I moved here, I had a mighty geology/climate lesson.  Because when I lived in Flagstaff at 7,ooo feet, I was on caliche ground and natural volcanic cinder.  We got a ton of snow (many feets of it!), but rarely did we see mud.  At that altitude, under that sun, the snow sublimated before it melted.  And when it did melt, it ran off the hard ground in sheets.  Only in a few select places did it create squishy spots.

So as I prepared to move to new high foothills, here on the windward side of the Sandias in New Mexico, I planned my horsekeeping accordingly.

Wow.  No caliche here.  No indeed.  What we have here is adobe mud.  And there’s a reason people made houses from this stuff.  It will suck the shoes off your feet, send you sliding away on the slightest slope, and swallow you up to your knees.  It will especially do this if new construction has disturbed the soil.

Right.  So says the horse who happily rolls in said mud and then makes faces at me when it dries to concrete in his mane.  (And who also seems to be a fan of the original Star Wars movie.  Imagine.)

We made this discovery shortly before we moved in.  In a panic, we bought several loads of coarse wood shreddings from the local transfer station and had them spread–in the back yard where the dogs would have otherwise disappeared until spring, and in the paddock directly in the immediate barn area. The shredding packed down, created a mud buffer, and also did a stupendous job of sponging up all but the most profound application of monsoon rain.  (Not that we’ve had much of that in the past year, it is grim to say.)

The side paddock remained naked, although in the time since, we’ve tossed some token shreddings along the fence to make better footing for the pacing zone.

Duncan: The pacing zone is important.  Speaking of which, feed me now.

But the shreddings take a beating over time--they drift away, and they’ve been under hard use in a year when Duncan had no pasture time due to the drought. 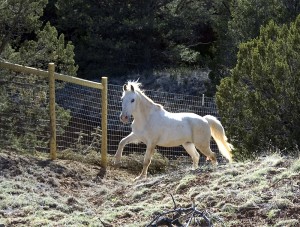 Duncan: I would much rather be on my PASTURE! 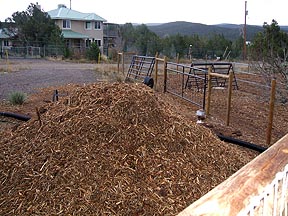 This is about a third of the original pile, which spread out into the driveway.

So this past week, we hired a strong back to help, and he hauled and I spread, and…

Lo.  The entire paddock is full of thickly layered shreddings.

And when it was done, I stood in the middle and surveyed Duncan’s domain, and realized what I’d done. 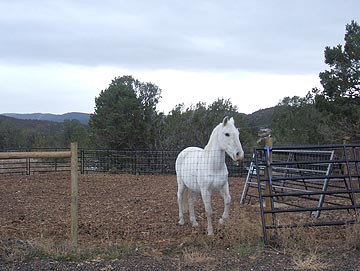 The giant litterbox, with winter-hairy horse and the Feed Me Foot in action

My books are SF/F, mystery, paranormal romance, and romantic suspense. My dogs are Beagles, my home is the Southwest, and the horse wants a cookie!
View all posts by Doranna →
This entry was posted in DuncanHorse and tagged barn, Duncan, land. Bookmark the permalink.