The Orange Cone Area is for loading and unloading only. (Nailed a few cones when I drove the trailer in. I didn’t see them! I swear!)

In my defense, by the time the horse stuff was done I was tired and the midway and main street and crowds just didn’t appeal!

Friday was the 4H show.  I didn’t bring a horse (being too old for 4H and all), so that made it pretty relaxing! It is also gratifying to see the kids I coach make strong rides.  (It’s a good way to note things to work on, too.  I have some ideas…!)

In the afternoon I went home and got a horse (Stetson, who belongs to Lindsey)–much later than I had hoped because I could not drag myself away from the trail class! 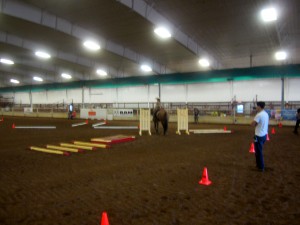 The temperature was plummeting and the clouds were seeping weirdly down the west face (Albuquerque side) of the Sandia Mountains like melting ice cream or spooky dry ice.   It was too cold to bathe Stetson after I’d finished riding him (and late anyway). 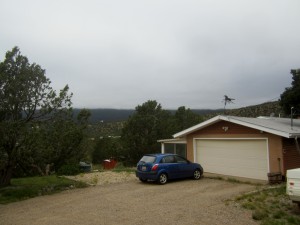 It was too cold in the morning, too, but Lindsey did some magic thing and Stetson looked bathed! He was clean enough to win halter, anyway!

Lindsey had to leave for work, so Saturday was my  day to show.  At the end of that we were  in the lead for High Point Open horse! We were not shooting for that, so it was a nice surprise! 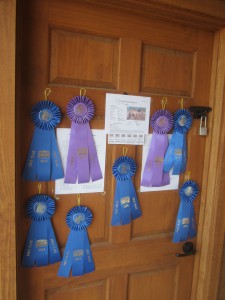 On Sunday, Lindsey was free, so she got to show!  In some ways it is more fun to watch and in other ways it is more stressful.  If things go great, everyone is happy, and my ego tells me I am pretty good at my horse and people training job.  If things do not go perfect, the evil devil on my shoulder says mean things in my ear and I wonder if I should have lunged the horse, or told the rider something different or changed the bit or… or… or….

I think a lot of trainers just put on coat of braggadocio so no one knows what is really going on in their heads.  It fools those that are paying the trainer to be fooled.  Hmmm…That might be a skill to develop.

After trail, we were tied for high point.  Then Lindsey placed in Open Junior Reining. (She also got second in youth reining–super cool because Stetson is a 16 hand pleasure horse that does not have the build to spin easily or stop big. She earned her placings by riding a good solid correct pattern!) The Open Junior reining points put us in the lead! 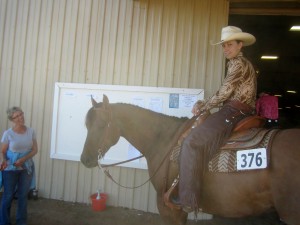 1. The points keeper had added the points wrong!  Seriously! We had NOT been tied after trail.  We had been down two.

But barrels and poles were left.

Stetson does not run.  He lopes.  Easy, comfortable, relaxed.  He can extend the lope, but I am not sure he even has a “next” gear.  Nevertheless, all we had to do was have me ride the correct pattern. So we entered, forcing show management to set up the courses for just one entry: me and Stetson. (They were really nice about it!)

We won barrels!  We won poles!  We moved into first in the Open Division and Stetson earned 100 smackers and a buckle! He won a buckle at his first Quarter Horse Show!

What a super way to end the State Fair.

This was also Stetson’s first full show season! We have been working away and he now can really be competitive in halter (cuz he is big and gorgeous), western pleasure, western horsemanship, trail, hunter under saddle, English equitation and western riding. He is not a reiner but, he can run a correct pattern. He does not look like a ranch horse, but he can execute a Ranch Pleasure pattern.  It takes three to five years to produce and polish an all around horse, so we are really pleased!  (And, by-the-way he also won High Point Junior Horse for the NM Buckskin 2014 show series.)

He is for sale. (Inquiries welcome!)

(That is sort of sad… he will move to a new home…but Lindsey wants to concentrate on reining and cow horse, which I, of course, completely understand!)

He will make someone a super mount because not only is he the kind of horse that people walk up to so they can comment on his beauty (ego booster!), he is also a nice mover, likes people and  is just fun to be around.

Oh and he can ride out.  On Wednesday after giving him two days off, I threw on a slicker to keep off the drizzle, and rode him in the mountains at a walk, trot and lope!

I seriously hate it when the long-termers go. *sniff*

Here's the skinny: I have a thing for horses. They make sense to me. I have a small horse training business (it's a "boutique" training business, not because it's super fancy, but because the horses get a lot of personal attention). I also go by Dr. Wilber, and teach biology full-time at a Central New Mexico Community college.
View all posts by BlogPatty →
This entry was posted in The Write Horse and tagged adventures, horses, New Mexico, riding, Writing. Bookmark the permalink.