Tryptophan as a calming agent in horses

(Update on Cloud at the end)

(Thanks to Stacy Boswell, DVM, for consultation on this!)

Last week I talked about Equine Appeasing Hormone as a calming agent and this week is tryptophan.

Perhaps these seem like rather obscure items to use to calm horses (and there are a few more for the next couple of blogs), but I am focussing on substances that are not illegal to have on board a show horse.

When looking up equine calmers, the product will often say “will not test” indicating that if one’s horse were tested for illegal drugs, this supplement would not result in disqualification.

Tryptophan is an amino acid (building block of proteins).  We often blame high levels of tryptophan in turkey for our somnolence following a Thanksgiving turkey feast, but apparently, that is a myth.  Cheddar cheese has more tryptophan than turkey, says the LiveScience article linked above.  LiveScience says the cause of the sleepiness is consumption of lots of carbs which can facilitate passage of tryptophan across the blood brain barrier, where it can convert to serotonin.  Alcohol, and perhaps just general relaxation can also lead to sleepiness after Thanksgiving dinner.

As just mentioned, tryptophan is a precursor to  serotonin and melatonin (2, 3). In the brain, serotonin is considered a feel good chemical and it does influence sleep and mood.(4, 5).

Melatonin is  involved in our sleep-wake cycle (6).  The info with the numbered links came from Grant Tinsley, 2018.

Ok, so at least in humans, tryptophan is related to sleep….So, extrapolating to horses, dosing with tryptophan could make them…sleepy? 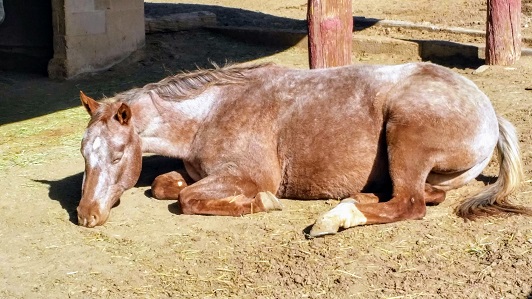 zzz i am just sleepy. i don’t need no stinkin tryptophan!

This article from Grimmett and Sillence, 2005 gives a good summary of the research on L-tryptophan in horses and concluded there were approximately ZERO published scientific studies at that time that show tryptophan is an effective calmer in horses.  A couple of rather extreme studies showed insertion of high levels tryptophan directly into the gut can cause hemolytic anemia and high levels of consumption can decrease endurance (in that test they worked the horses to exhaustion.)

All subsequent studies that I found fail to show a calming effect of tryptophan on horses.  It CAN reduce something called “hysteria” in big chicken barns when fed over time (Laylock and Ball, 1990).

On the other hand,  EquiFeast (who is in the business of selling things like tryptophan to us horse owners who might balk at spending $150 on something for ourselves, but will drop the same on supplements, no problem) says tryptophan works and the studies are all flawed.

In fairness, Grimmett and Sillence, 2005, also thought there might be some mis-interpretation of behavior in some of the studies they reviewed.  Is sleeping a sign of relaxation or is it a fear-based avoidance response?  Is increased exploratory behavior (moving around and sniffing) a sign of increased confidence or a sign of anxiety?  Studies do not seem to agree, and thus, the same types of data have been interpreted in polar opposite ways.

Equifeast says the studies have tested sedation not calming, and tryptophan does not sedate the horse, so the studies do not reveal the effects of tryptophan. Hmmm.

Grimmett and Sillence (2005) do call tryptophan a sedative, though.

Equifeast then goes on to say, “many years of experience and careful monitoring of outcomes in the real world tells us….”

They do not provide the data regarding the careful monitoring, and then they tell a story, which to their credit, they do refer to as an anecdote. Anecdotes are not hard data.  They are in the observation category of the scientific method. 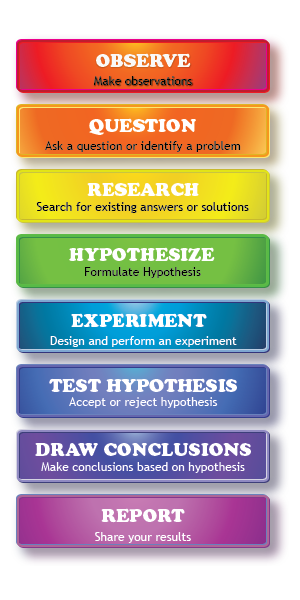 The story suggests that horses can be given up to 40 g of tryptophan per day as a feed additive, and this will have a calming effect.  Furthermore, over a season, as the horse becomes habituated to showing, less and less tryptophan would be needed.

There are published scientific studies that have “shown that tryptophan supplementation decreases aggression in humans, dogs, pigs, poultry, and fish, and that it may reduce fearfulness and stress in calves, vixens and poultry. However, behavioural characteristics more closely linked to excitement, such as hyperactivity in dogs, are not modified by tryptophan supplementation.” (Grimmett and  Sillence, 2005)

Equifeast suggests (again with no data at all) that tryptophan gets depleted in stressed horses, so then they don’t make enough serotonin, leading to behavioral issues.

I looked up ingredients in a number of paste calmers (707, Smart Calm, several types by Perfect Prep) and they all contain tryptophan.  But they also contain things like magnesium, inositol (a vitamin B-like molecule) and thiamine (Vitamin B1), all of which also are purported to have calming effects on equines.

I used Perfect Prep, which contains tryptophan, and a bunch of other stuff, on LT and the product definitely worked, but was it due to tryptophan, another ingredient, or a synergistic effect of multiple ingredients?  There is no way to know.

So….the verdict on tryptophan alone as a calming agent in horses is….

However, since the metabolites of tryptophan are known to calm the brain in other species, there is still the possibility that tryptophan does work in equines, and previous studies failed to adequately capture the effects.

Suellen says he is up to full weight! They are in a training competition for the volunteers at the rescue ranch and are working on  lunging, an obstacle course, loading and unloading from a trailer, and ground tying! She says he has gotten a little lazy during his recovery, but we can reframe that…he is relaxed and happy and not a candidate for calmers!

So nice to see, and this first picture really makes me smile! 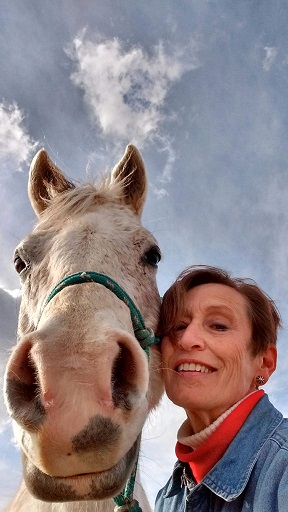 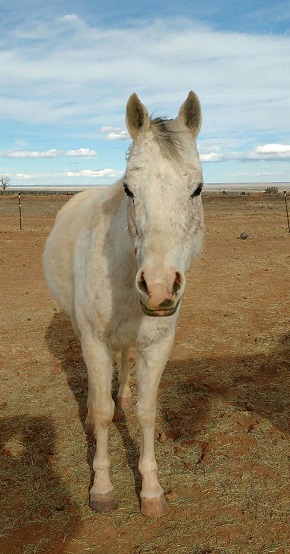 Here's the skinny: I have a thing for horses. They make sense to me. I have a small horse training business (it's a "boutique" training business, not because it's super fancy, but because the horses get a lot of personal attention). I also go by Dr. Wilber, and teach biology full-time at a Central New Mexico Community college.
View all posts by BlogPatty →
This entry was posted in The Write Horse and tagged happy sigh, horses, The Write Horse. Bookmark the permalink.

2 Responses to Tryptophan as a calming agent in horses