The snow won’t melt. The nerve!

The barn frost-free spigots are frozen. (Ok could be this is an installation issue–pipes are not buried deep enough or the drain field is clogged, but, regardless, they’re still frozen.)

The horses are kind of iced up, too. 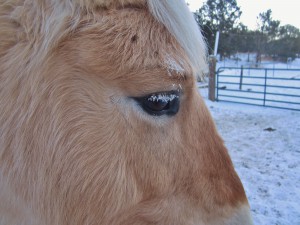 The trails are covered with 6-8 inches of the white, and are reasonably rideable…at a walk.

The road has been icy, and underneath that it is paved,  so no riding above a walk there, either.

And the arena...well…working on it.

Usually, a little riding around to expose the sand, a few days of sun and it’s good.  Unfortunately (for me–the horses don’t seem to care if they don’t have to work!), this run has not seen much sun, additional storm systems added more snow, and temperatures have been stubbornly low. Below zero some nights and under 30 degrees F during the day. 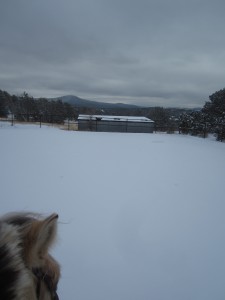 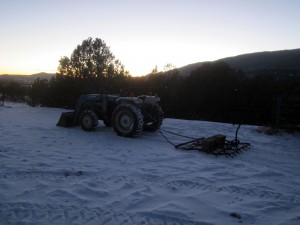 Got the arena churned up but since nothing would melt, it was kind of an icy, gravel-like surface for a week or so. 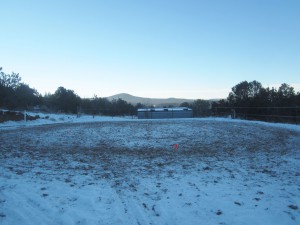 Finally on Wednesday, we got above freezing, no wind and lots of sun! 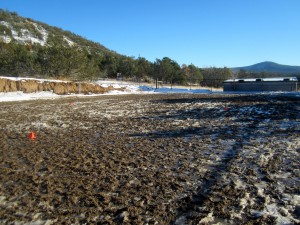 By 3 pm it was  pretty thawed, or was that swamp-like?  It was not slick though, as the surface is sand mixed with crusherfines.  (The “permafrost” underneath did add a slight wrinkle.)

By 4:30 it was starting to ice over again, so got out the trusty tractor and re-dragged.  Had a little trouble with my cinder block drag weights because instead of the drag smoothly following the tractor, gently furrowing the soft sand, it was bouncing around over the deep icy bits tossing off my blocks (oh and I had the tractor in 3rd gear so I could speed-drag before it got too too cold, and dark). 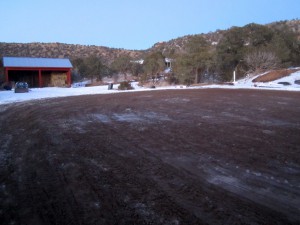 Beautiful–if you don’t look too closely at the remnant ice patches and the puddle that will be part of the skating rink in the morning.

Thursday morning, after a low of 16F, it looked like this, but by afternoon, it was soft(er) again. 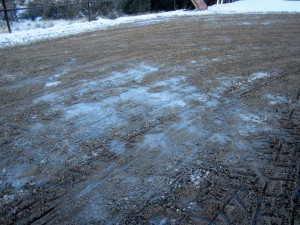 Only small ice rinks, but hard as cement since it was frozen… 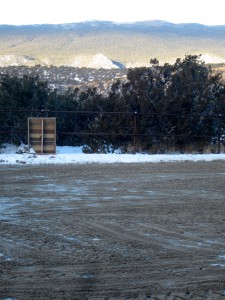 Still, a lovely place to work.

Now if I can just get it close to dried out, we can start over with the next dump. Which might be Thursday night.  I hope not.

It DID snow overnight–not much–but more could arrive during the day.  What a DRAG!

Here's the skinny: I have a thing for horses. They make sense to me. I have a small horse training business (it's a "boutique" training business, not because it's super fancy, but because the horses get a lot of personal attention). I also go by Dr. Wilber, and teach biology full-time at a Central New Mexico Community college.
View all posts by BlogPatty →
This entry was posted in The Write Horse and tagged horses, The Write Horse, weather. Bookmark the permalink.

6 Responses to It’s a Drag!