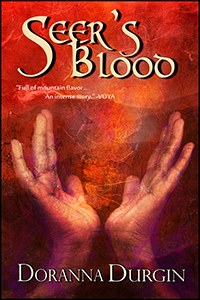 SEER’S BLOOD is an Appalachia-based coming of age fantasy in which a threatened community rediscovers its lost roots–and its magic–in the grit of an outcast girl, the heart of a stranger, and the loyalty of his hounds.

When Blaine Kendricks discovers strangers in Shadow Hollers, she thinks they’ve come to trade. She couldn’t be more wrong.

When Dacey Childers comes to Shadow Hollers, Blaine’s family thinks he’s there to hunt game. They couldn’t be more wrong.

When the Annekteh come to Shadow Hollers, they think the isolated community living there has no way to resist their invasion.

They’re pretty much right on target.

But the last man of the lost seer’s blood has returned, and is about to draw Blaine into his magic, his adventure…and the most dangerous hunt she could ever imagine.
~~~~~

“Doranna Durgin has been quietly turning out low key but very intriguing fantasy novels, of which this is the newest and in many ways the best.”
–SF Chronicle

“With this book, Doranna Durgin displays her customary precision in plot (tangled yet plausible, with tension that fairly hums from the page), setting (richly rendered and full of fresh, original details that truly delight), and characterization (thoughtful, layered, and well able to drive the plot)…. Seer’s Blood is low fantasy at its very best, showing how great events affect people on a small scale.”
–Hypatia’s Hoard

“SEER’S BLOOD is a fast-paced magical adventure. Doranna Durgin imbues her characters with heart and soul, making the reader care about them in ways that are rare in fiction.”
–Alan Meitlowski, BookHound

“The author creates high adventure with a subtle touch of romance here. Durgin’s writing is full of mountain flavor, and her characters, both human and canine, are strong and clear…. This is an intense story that should appeal to…fantasy fans.”
–VOYA