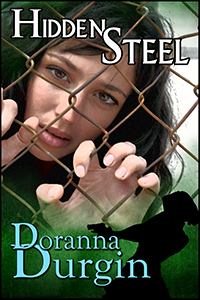 Steve Spaneas doesn’t have a clue.

Who’d have thought that the woman who stumbles her way into his gym, looking and acting so very much like a street person off her meds, is really a CIA case officer whose memory has been obliterated by experimental drugs used by some very bad people?

And seriously, who’d have thought that her attempts to untangle the few clues she’s got would lead him right into her world of spies and counterspies, death and deception–and holy cow, stockpiled nuclear weapons?

But Steve had better figure out who he trusts–his years of experience on the streets, or the heart of a gritty woman determined to reclaim herself–and he’d better figure it out fast. Because suddenly there’s a body out behind the gym, surveillance teams lurking, and a series of unsavory goons following the trail of a woman temporarily named Mickey right through his life.

“HIDDEN STEEL is a pulse-pounding suspense…Full of mystery and interesting characters, HIDDEN STEEL will grab readers from the beginning and is a book you don’t want to miss.”
–Jennifer Bishop, Romance Reviews Today

“Mow your lawn, finish doing the wash, and walk your dog BEFORE starting this book!” – B&N Reader

“Another trademark Durgin, full of realism, deft strokes of humour (and pop culture), plenty of sizzle, compassion, action, and a heroine you not only believe, you want to be. Grab this one.” –Julie Czerneda, Stratification series

“HIDDEN STEEL is a page-turner voyage of discovery, with the fate of the free world in the balance.   Well-drawn characters, numerous plot twists, and unexpected glints of humor are what I’ve come to anticipate in any of Doranna’s novels, and this one definitely lived up to expectation!”
–Michelle Shirey Crean, Dancer of the Sixth 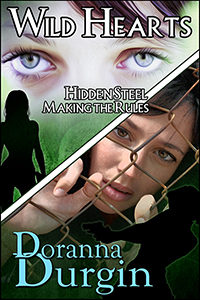