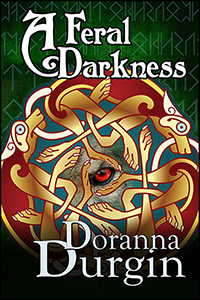 Years later, Brenna discovers the terrible potential of that gateway. With a devastating plague unfolding abruptly around her, she must depend on her wits, a stranger she doesn’t trust, and a mysterious stray dog who becomes more than just a faithful companion as she struggles to drive back the threat of a modern Black Death.

Welded by a desperate sacrifice, woman, man, and dog face the feral darkness together.

“The mystery and fantasy slowly draw together, bonded by supreme characterization, to make for a story which is almost impossible to put down.”
–Reviewers Bookwatch

“If you are looking for a book that has paranormal elements and some romance, is expertly written with wonderful characters and has a smooth pace that leads up to a climatic finish, A FERAL DARKNESS is the book for you and it is not to be missed.”
–The Romance Reader’s Connection

“This is a very smart, well-woven book, with an initially cranky but ultimately endearing hero and a thoroughly satisfying ending.”
–Mary Jo Putney, bestselling author of the The Rake 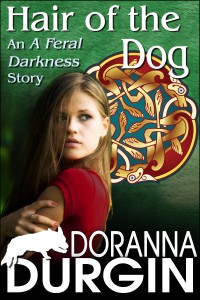 One woman, one dog, one god…finding the line between justice and revenge.

Brenna Lynn Fallon grooms dogs, owns a Cardigan Welsh Corgi with a little something extra, and has a lifetime acquaintance with the ancient power once known as the Celtic god Nuadha. But there are responsibilities that come with being favored by a god, and the threats Brenna faces don’t always come from things supernatural…or even from outside herself.