Learning to Allow the Lull

I enjoy having jam packed days most of the time, but I am finding it is not workable for me to go full tilt while on Chemo. (Duh, right? But I had to try!).

I am learning to allow the lull. I think the universe is helping me out! I am at five horses on the place, down from nine to ten for a lot of the year. And my waiting list is willing to wait.

Leo, who was boarded here for a few years got to go live at home in August with a  brand new barn and arena.  This occurred just as I was diagnosed.

Breeze, who has congenital scoliosis and exacerbated it somehow here (fell we think), needed to have a much flatter living space.  She moved right before my treatments started.  She is doing fantastic in her new digs! This is excellent news for all because Breeze was bad enough that euthanasia had been on the table.

Sonora, a two year old filly start who belongs to Emily, made such fast progress she went home in six weeks instead of three months.  That filly is the kind that makes a trainer look good and feel proud!  She is very level headed, enjoys attention and wants to please, so progress was fast.  Plus, Emily is also the kind to make a coach look good! She came once or twice a week and has been able to be on the filly since ride one.  I was able to coach Emily on what I was teaching the filly.  I am super proud of Emily.  She learned a lot in that short amount of time!  I am looking forward to future lessons!

Christy and I agreed that Deets deserved a nice winter break, so he is home with Gette’s brother Gino, and Christie’s grulla half-Arab, Lamont (he is a very striking color!) Deets worked hard to learn flying lead changes this year.  It took me a while, but he ended up being darn good at them! Perhaps we will be adding western riding to his class list!

Lucy is still on rehab (almost done and she is doing quite well) but I can only ride her at a walk for a few more weeks. Easy and relaxing.

A horse slated to come for a tune up has been doing so well at home with one of her owners who had not ridden her previously, that she doesn’t need to come and she is no longer for sale!

Penny came home and LT is over with Heidi and is by turns (as is normal for LT) a horse that could win big in a cow horse competition, or get last.  It is a challenge  Heidi is up to! It is so fun seeing Heidi do a such a nice job on LT, especially thinking back to two years ago when LT was not rideable for her.  So proud of Heidi and the time we put in on Penny to get to where she can ride LT! Darren Miller has been coaching them on live cows and he is an outstanding coach and a fit for Heidi. Just as important, and also impressive to me, is that after one ride, he understood LT apparently completely, and can help Heidi help LT. He also really, really likes LT, which, of course, makes me happy.

With LT and Lucy out of my picture, I have no cow horses to work cows with so I am taking a temporary break from working with Darren myself. I’ll be back ASAP!

I have finished starting the half-Arab, Surupa, and she is waiting to be sold or head home, so I don’t need to ride her. She started off on the highly unfocussed end of the spectrum, and now can trailer load calmly, tie without getting anxious, ride tough trails, and has basic body control at all three gaits. She can also negotiate many Trail the Horse Show Class, obstacles.  Yes, she still needs support and direction, but she has come such a long way and she is so personable and stunningly beautiful. 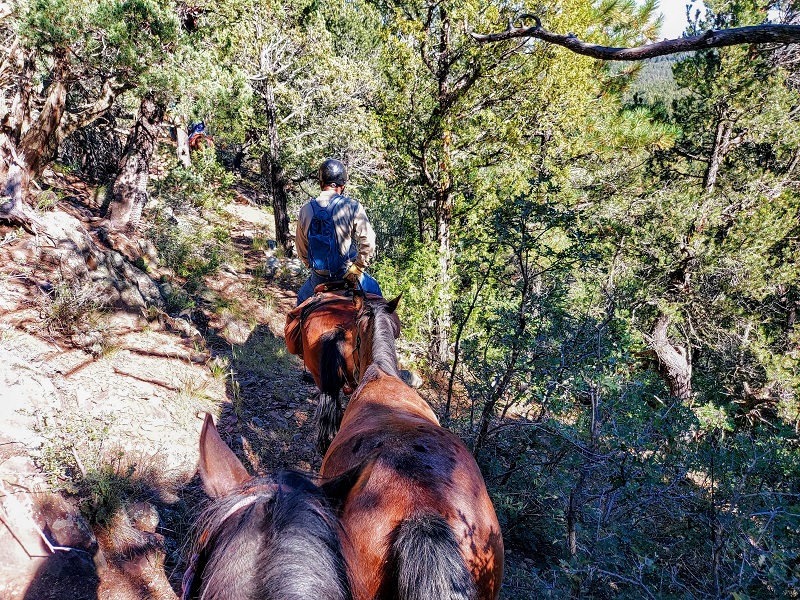 Surupa’s ears following Gette on the Albuquerque Trail to Mosca to Cerro Blanco to 4th of July loop!

When I stopped riding Surupa, and Sonora, who was in the pen next door, went home, Surupa got a little depressed! She kept coming to the gate and saying, “um! me! remember me?” I decided to put Gette in with her.  That was the perfect fit.  My other mares tolerate Gette but they do not love her.  Surupa does love her and the two of them eat together and frequently also drink together! They both seem quite pleased. 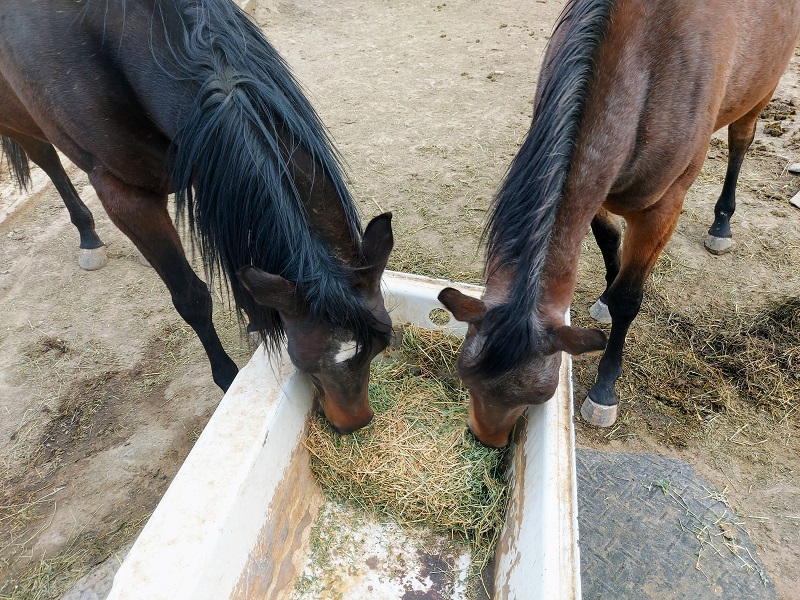 I also ponied Surupa out the other day off Lucy, just for fun.  We are having trees trimmed and removed.   There was chain sawing, and the chipper was spewing chips not too far from the driveway that we needed to ride up.  Lucy took a look and went, “hm, interesting!”  Surupa, figuratively, started to hyperventilate and literally did prance just a bit, but Lucy said, in her calm way, “it is no big deal. c’mon. u got this.”  On Surupa came.  I guess I am in a mushy mood, because dang, I was proud of both of them!

Penny are Cometa are seasoned horses, so I do not need to ride them.  If they get most of the winter off, it will be ok. Gette does not need to be started until summer.

Thanks, Universe!  You took a lot off my plate at just the right time!

Allowing the lull is probably a lesson I can carry forward once I am back to full form. Doing something has long been my default mode. I mean there is so much out there to do! And so many things a horse can learn! But, doing nothing, even while horse training, can be beneficial!  That reminds me of a story a famous trainer told–can’t recall who or even if several have said similar things.  Anyway, said trainer was sitting on his horse in the middle of the arena doing nothing.  Another rider was busy around him and asked what he was doing.  “Training my horse,” he said.

2 Responses to Learning to Allow the Lull