The Importance of Breathing

(I promise this is related to horses, at least tangentially.)

On the recommendation of Jim’s cousin, Pam, I read a book over the summer called “Breath” by James Nestor.  It was a fascinating discussion of the benefits of breathing through the nose, breath holding, humming and a lot of other fascinating breathing studies. It was a lot to take in, but I decided to really try to breathe primarily through my nose and practice a little bit of breath holding.  Lo and behold, my chronically plugged up left nostril is no longer chronically clogged and my breath holding capacity has doubled (it was very bad to start with…)

I am going to start on another breathing program this week, the Wim Hof Method, primarily because it can help increase cold tolerance (I hate to be cold), but also because it causes documented increases in immune system function, and that seems like a win win right now!  Wim The Iceman Hof has completed amazing feats of cold tolerance.

And just because I am talking about breath stuff, every one should check out this video of free diver Guillaume Néry.  He can not only hold his breath for 15+ minutes, he can do it while swimming at unbelievable depths in the ocean.

Ok, Ok, so what has this got to do with horses?  Though not directly related to the breathing techniques and benefits mentioned above, horses can be very very in tune with our breath.

I did a clinic a few years ago that included a very inexperienced rider on a horse that was not really into it.  Things were getting a little scary for the rider and the horse.  I told the rider that we could help her horse (and her) with a little breathing exercise.  I had her sit quietly, inhale deeply and sigh it completely out, relaxing her body.  Fortunately, the horse had read the users manual, and as I had hoped, he too let out a giant sigh to mimic hers. They both had a moment of release and resetting that allowed them to have more success.

That technique can feel like a magical connection with my horse in that moment when my breath has such a great influence on my equine partner. If anyone tries it and finds that, too, I would love to hear about it!  I use it regularly when colt starting.

In addition to using big releasing breaths to help calm and reset, rhythmic breathing is important for rhythmic movement of the horse.  I don’t know about you, but sometimes if I am concentrating hard on something, I tense up and forget to breathe normally.  Neither tensing up nor holding one’s breath is helpful to the horse. Inhale, exhale, stay supple.  Horses notice!

Lately, I have been doing a lot of downward transitions with a particular horse that happens to be fairly forward.  He was hard to slow down without over tucking his head and sometimes putting a lot of pressure on his mouth.  We have been working on his ability to feel breath and, in the spaces where he is all in with me, he can now go from an extended lope to a walk on a breath. I just have to sit deep and exhale. It is kinda cool!

My friend send me a meme yesterday (timely!  I don’t think I had told her the blog topic…) This is what is said: 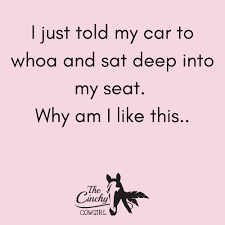 My friend said she was like that because of me! 🙂 Of course, I’d have added “and exhale…”

In competition, one has to be careful.  I recently caused LT to break from a lope on my last maneuver in a ranch riding pattern because I thought “home stretch!” in my head, and relaxed, which must have corresponded to a small exhale!  We surely know that break was not the horse’s mistake! The horse did exactly as I suggested!

For a more structured approach as compared to my musings, there are programs, like Sally Swift’s Centered Riding, that emphasize proper breathing as a corner stone of communication with the horse.  I might have to re-read that book!

Happy Breathing! (Through your nose.) 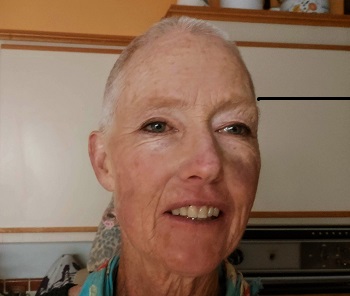 Haha! Hair be gone! I look a lot more like my Dad now!

It was Thursday morning, and has not yet (as of Thursday night) produced the killer headache. I was able to ride three horses after the treatment without wearing out. I also changed my symptom management and have been drinking many fluids (I feel quite bloated, actually, which is not super), have been proactive with the cannabis tinctures, and have eschewed the standard anti-nausea meds since I do not feel nauseous at this time!  Fingers crossed!

Also, the tumor shrinking as it is supposed to!

Thanks Mary Ann E. for being my chemo buddy this round!

Here's the skinny: I have a thing for horses. They make sense to me. I have a small horse training business (it's a "boutique" training business, not because it's super fancy, but because the horses get a lot of personal attention). I also go by Dr. Wilber, and teach biology full-time at a Central New Mexico Community college.
View all posts by BlogPatty →
This entry was posted in The Write Horse and tagged riding, The Write Horse. Bookmark the permalink.

5 Responses to The Importance of Breathing