We were ready in the safari trucks as the 007 Vet (Dr. Gerhardus Scheepers) stepped into the helicopter with the dart gun loaded with tranquilizer. 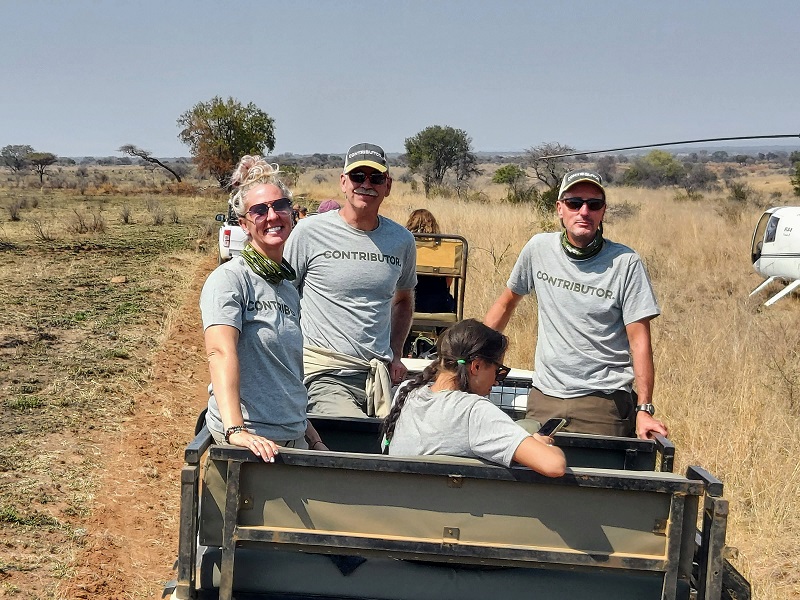 Loaded in the trucks and ready to go! Keb, Jim, Emilie, Brian. 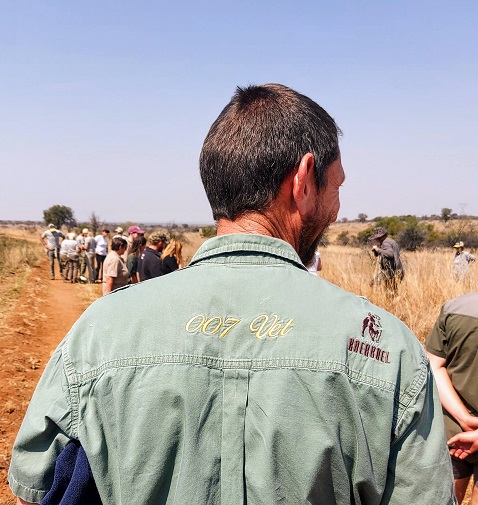 Dr. Gerhardus Scheepers, 007 Vet! (He has an Instagram page of the same name.) 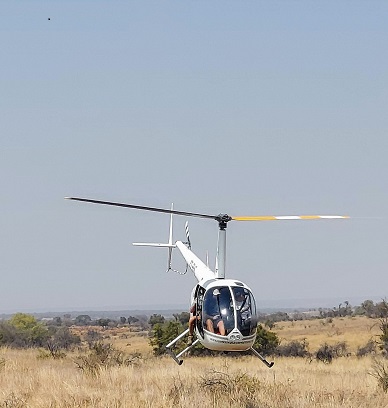 Lifting off in search of rhinos!

The helicopter engine rumbled then built into a roar before lifting off in search of the our first of eight rhinos we needed to horn trim.

Melissa (Research Coordinator) and Lynne (Mankwe Reserve Operations  Manager) record locations of the rhinos on the Mankwe Reserve daily, and Luke (Assistant Operations manager), was in the heli to identify the individuals.

On the ground, we pulled up our buffs against the dust and held on with white knuckles and laughed like we were on a ride at Disney Land, as our trucks, driven at great speed on the dirt roads by Melissa and Lynne, hurtled after the helicopter.

The plan was to find Sweet Chili first, because he was seen close to the take off spot the night before, and was one that might take to hiding if things got too busy.

He was spotted quite quickly, and darted in one shot (the vet is not nicknamed 007 for nothing!) It only takes a few minutes for the tranquilizing effects of M99 (= Etorphine –read more about it in Wikipedia) to kick into gear, and usually the rhino will begin taking very high steps, and then lay down. 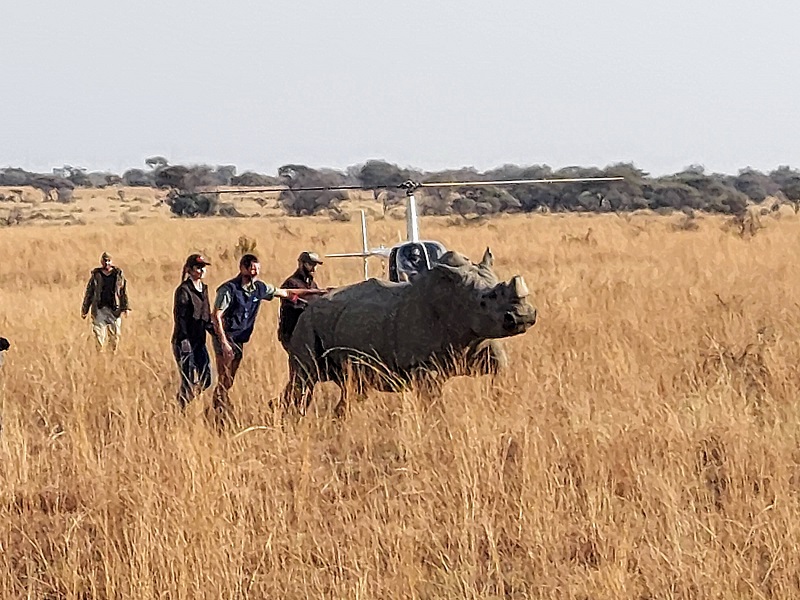 The first responder crew (Emilie, Keb, Jim, Brian) leapt out of their truck to help stabilize Sweet Chili and make sure he was in a comfortable position when he laid down.  Except he did NOT lay down!

So, the vet had to rev up the Sawzall and trim the horn while Sweet Chili was standing!

A mask is put over their eyes and ear plugs are inserted to decrease stimuli as there is a lot going on.  The horns are trimmed yearly so that the chance of being poached for the horn is decreased by 85%.

A needle was inserted into the ear to allow quick administration of the antidote to the M99. Shots of Ivermectin for internal parasites and a vitamin cocktail were given.  A stout needle is needed to penetrate the thick hide! (But the skin by their ears and face is soft.)

When a rhino cooperates and lies down (which the others did right away, as is normal), we had teams to take measurements of the horn and body, collect fecal samples for a food study, and make tick counts.  Another team was in charge of monitoring breathing to verify that the rhino was not in distress.

Because trade in rhino horn is illegal, the whole operation is monitored by a government official, who, as an aside, had recently been attacked by a snared leopard he was helping to free and relocate! It escaped the snare before it was tranquilized! He showed us the scar on his HEAD and photos of the leopard, who was released on this reserve! But back to the horns.  They were bagged and tagged.  They cannot legally be destroyed, nor can they be sold, so they are sent to a secure facility that Mankwe has to pay for.

Despite the little glitch of Sweet Chile not wanting to lay down, the rhino himself was not in distress. The antidote to the tranquilizer was administered and within two minutes he was alert and heading out.

White rhinos are fairly placid and come out of the tranquilizer calmly.  Black rhinos and Cape Buffalo are much more likely to wake up angry, intent in making the nearest human pay.

Up went the bird, and the trucks raced off for the next animal!  This one was somewhat dehydrated and his blood was thicker than normal, so the horn was trimmed and he was revived as fast as possible. 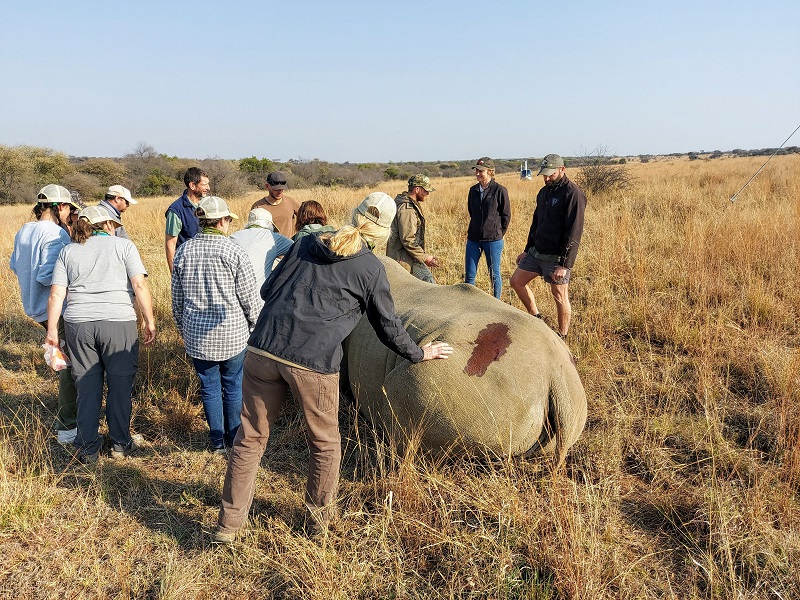 About to get up! The red is an antibiotic on the dart and shot spots. Full disclosure: This is not Leo, but I don’t know who it is. Lynne would know.

I also got to be on the breathing team for baby Hope! You can hear and feel the breaths, so my hand is there to feel. 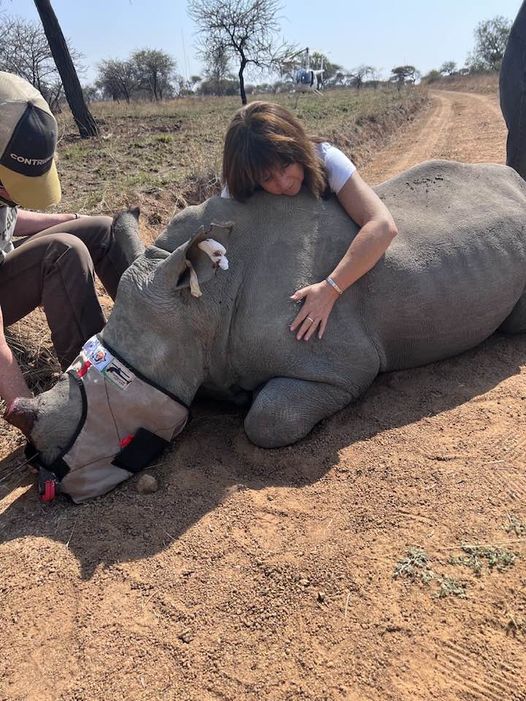 Trade in rhino horn is illegal, but demand in Asia, to the tune of around $60,000 per Kg of horn, is still high.  Black market poachers slaughter the animals and literally hack the horns off their faces. One to three rhinos are killed EVERY DAY, and at this rate, there is real danger of rhinos becoming extinct in as little as 15 years.

Horn trimming, to repeat, decreases the chance of poaching by 85%.  Yes, intact horns are beautiful, but at this point the choices are live rhinos with trimmed horns or dead rhinos. 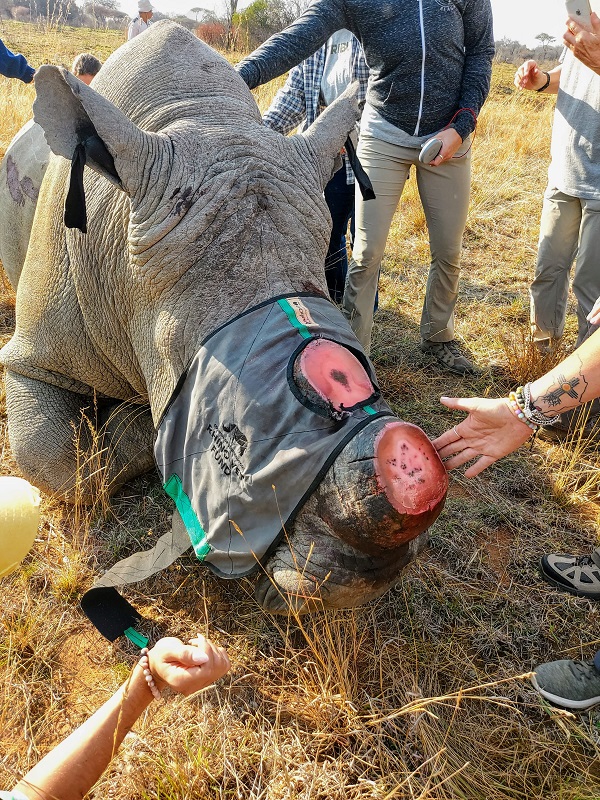 Both horns are trimmed and a red antibiotic solution is applied. Trimming is not painful and there is no bleeding. The horns are made of hard keratin, the same molecule in hooves and finger nails, so it is akin to hoof trimming. Horns need to be trimmed regularly–Mankwe does it yearly.

I have written enough, but other stories include the “controlled” burn, in which we burned around 600 acres in about an hour, collaring cape buffalo, setting and viewing the results of camera traps, an anti-poaching dog demo, and more. 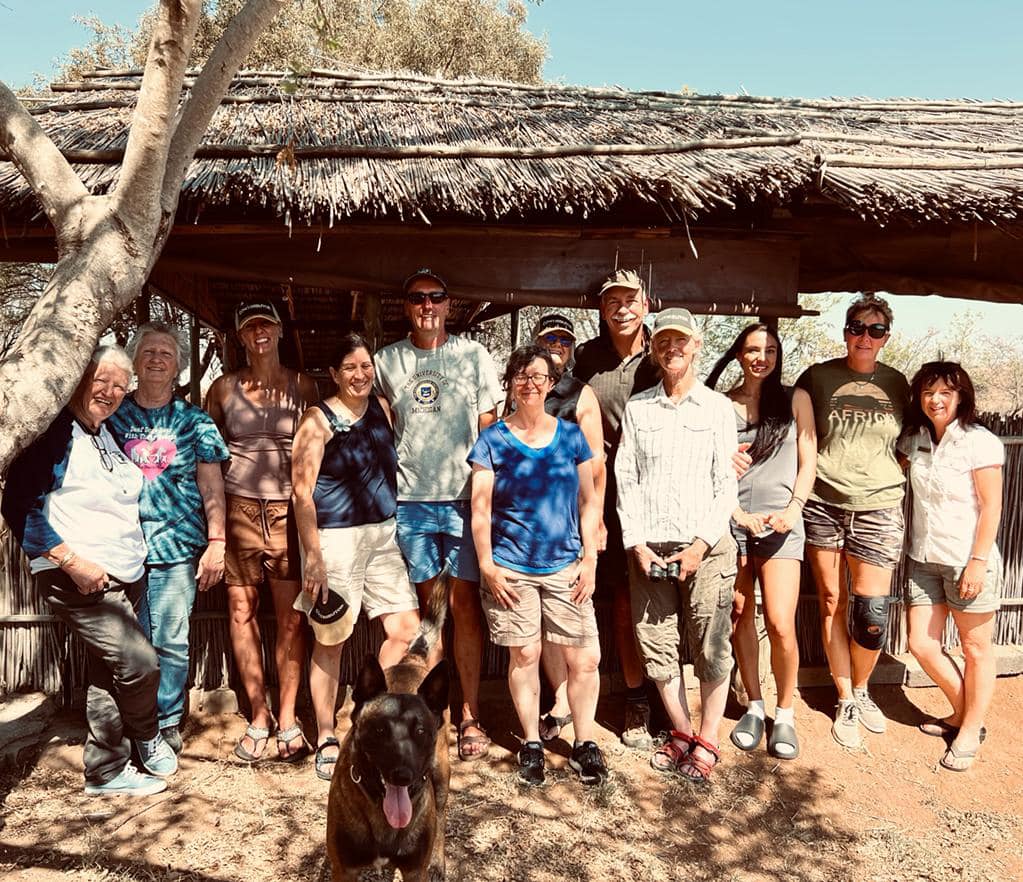 Our crew: Marilyn, Kathy, Keb, Julie, Brian, Terri, Lynell, Jim, me, Emilie, Diana our fabulous organizer and Council of Contributors board member, Lynne MacTavish,, Reserve manager, and Bruno, Lynnes dog. Photo Credit to Sarah Wilson who is an amazing photographer! (Her back is in the Youtube video above.)

If you would be interested in participating in a trip like this through Council of Contributors (we had six amazing days on the reserve) contact Diana DeBlanc 1 505 804-1846 via text or What’s App. Diana, CoC, and Mankwe have FB pages, too.

Mankwe Wildlife Refuge also coordinates with Earthwatch, runs school and university programs, and has its own volunteer program.  Check that out at the Mankwe link.

If you would like to donate money, Council of Contributors (a charitable 501C3) specializes in Rhinos and has an easy to find donate button. But here is the direct link to make that easier. Contribute.

Mankwe also accepts donations (but the cover picture on that page may make you cry).  I am pretty sure the CoC is working with Mankwe to sponsor antipoaching dog-human teams, too.

This was a fantastic trip.  Thank-you Diana DeBlanc for coming up with and organizing such a great experience, and many thanks to the entire amazing, dedicated, enthusiastic, passionate, knowledgeable Mankwe staff.  When they say they treat you like family, they are not kidding.

Here's the skinny: I have a thing for horses. They make sense to me. I have a small horse training business (it's a "boutique" training business, not because it's super fancy, but because the horses get a lot of personal attention). I also go by Dr. Wilber, and teach biology full-time at a Central New Mexico Community college.
View all posts by BlogPatty →
This entry was posted in The Write Horse and tagged adventures, The Write Horse. Bookmark the permalink.