A Challenging Show and the Scoop on Lucy

It did rain all day at the show last Saturday!  It feels like the tropics instead of the desert around here! All the outdoor classes DID have to come indoors, which did lengthen the show considerably.  To add even more drama, as dusk was falling, the power went out all over the region!

Well! THAT ended the Saturday portion early!  We did do Ranch Conformation in the semi-dark, which did not hide LT well enough.  She still ended up last.  The power outage also meant we had to be back at it at 7 am Sunday instead of 8 am to try to get back on track.

Sunday was supposed to be Gette’s day, but then Christy, Gino’s mom, was not feeling well and Gino, Gette’s fellow yearling, had turned himself from a leopard appaloosa into a sorrel due to the mud! I did not feel like showing against myself, so I scratched Gette and concentrated on LT. 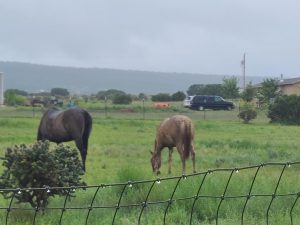 After a day of rain, Gino, a leopard appaloosa, looks like a sorrel! Photo by Christy.

Overall, LT executed well in cattle and ranch riding.  She actually won All Breed Trail, which may be the first trail class she has ever won, but then she said, “I TOLD U I HATE TRAIL” in the Appaloosa class. She spooked at the log drag and gnashed her teeth while we worked the gate (though her feet stayed pretty still, which was something.)

We needed another entrant in Open Trail to bring the class size to eight and increase the points, so we coerced Heidi into showing with Penny.  Fortunately, Penny actually likes trail. They put together a really pretty pattern and earned two firsts and a third against some top notch open horses and open riders!

When LT was not showing, she was pretty busy crying loudly in her stall and pacing about.  I was really missing Lucy’s low key demeanor (and the fact that she does well in halter and trail and everything else, as well).

LT has gone on Gastrix (anti-ulcer treatment) from now until the September show because Gastrix helped some of LT’s relatives feel, and thus behave, better.  If LT seems happier at the September show, I may show her more.  Lucy, unfortunately, is probably out for the season.

Lucy got the full exam at the vet on Monday at Albuquerque Equine. 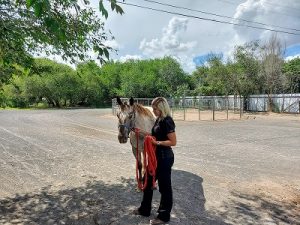 First, she got trotted around in the parking lot. Of course, she did not seem as off on the left front as she had last week, but Dr. Dralle could still see it. Next, she had to hesitantly step into an area that looked, to her, suspiciously like a wash rack. There she got a nerve block in her foot, which did not change the picture.

Then she got a sedative and an ultrasound which revealed some enlargement of her suspensory ligament, which was squishing some blood vessels to some degree. The ligament had no obvious tears and the structure otherwise appears pretty normal. (whew) 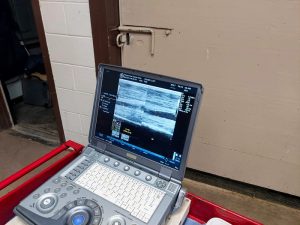 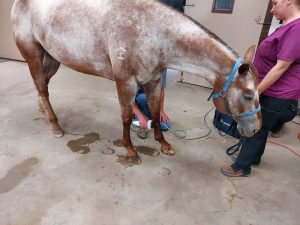 According to this article in The Horse (which I verified with other sources but this is well stated so I copied it)  “Shock wave machines send a short burst of energy through tissues in the form of sound waves. The waves are delivered to an injured area through a probe. Settings on the machine control the depth of penetration and degree of energy delivered. The sound waves affect the injuries, especially at tissue interfaces, such as where ligament attaches to bone.

Shock wave is typically applied every two to three weeks for three treatments.” (Lucy’s next appointment is Sept. 13). “The time between treatments and the number of treatments can vary with the injury and preferences of the veterinarian. The injury is monitored by clinical and ultrasound exams, allowing for decisions on treatment and management of the horse.

We do not know the exact mechanisms behind shock wave’s ability to improve healing. It is thought it causes the release of molecules from cells, such as growth factors and cytokines, which are known to promote healing. Research has shown shock wave has beneficial effects on local blood supply. It can promote bone production by increasing osteoblast cells involved in making new bone. Shock wave also recruits stem cells, which are integral in the healing process.”

I need to walk her 20 minutes once or twice per day, and her prognosis is good.  It will just take a bit of time. And fortunately, based on the fact that she was barely limping, it is not a major injury.

LT also made the trek to the vet.  She had a little growth removed.  We don’t have the histology report yet. 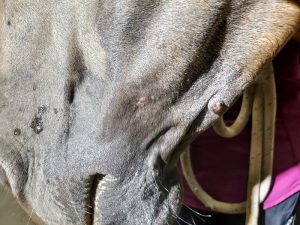 She had that growth removed.

So, we are recovered from the show, are all health-cared up, and us people are ready for the next adventure, which is Africa, in a week.

There will be no blog Sept. 9.

Here's the skinny: I have a thing for horses. They make sense to me. I have a small horse training business (it's a "boutique" training business, not because it's super fancy, but because the horses get a lot of personal attention). I also go by Dr. Wilber, and teach biology full-time at a Central New Mexico Community college.
View all posts by BlogPatty →
This entry was posted in The Write Horse and tagged adventures, horses, New Mexico, riding, The Write Horse. Bookmark the permalink.

2 Responses to A Challenging Show and the Scoop on Lucy