A few weeks before our planned trip to Canada, we both got mild cases of Covid. I had been testing negative for over a week and Jim tested negative a few days before we left, using an at home antigen test.  We both were feeling fine, and according to the CDC guidelines, were clear to travel.

You can fly out of Albuquerque at 8 am and arrive in Vancouver, BC, Canada by 1:30 in the afternoon, so long as your planes all take off on time.

But given the state of air travel today, one can never be too sure.  We got on our first plane Friday morning, in time for an 8 am departure.  It broke before we hit the runway.  We did not leave Albuquerque until 7 pm.  But hey! We got to Vancouver by 2 am! Our lovely daughter-in-law graciously picked us up, too!

Vancouver is, on the whole, a much cooler and wetter climate than NM (even though it was warm and sunny the whole 2.2 days we were there.) The trees are a LOT bigger and there is the whole ocean thing going on. 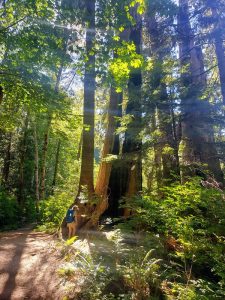 Erika and some big trees! She is near red cedar!

We got up Saturday and went for a hike right from Erika’s apartment into Pacific Spirit Regional Park.  We covered about nine miles, because we try to never actually rest on any vacations we take. 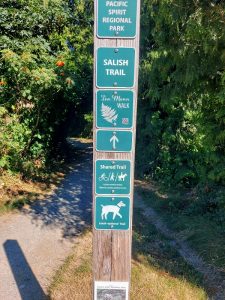 Share the trail with horses! But although the trails we hiked both days said horses were permitted, I never saw evidence of any equines.

We hiked down to the shore, where Jim took an obligatory swim.  It is his mission to swim on every trip we take if there is swimable water.  Then, we climbed a lot of stairs (my legs were sore the next day and I also had to rest part way up!) so we could continue on to the Museum of Anthropology. 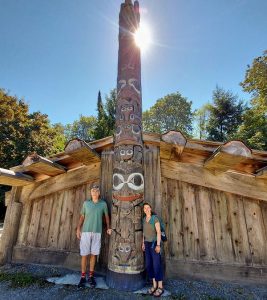 The huge totems and the plank houses made of incredibly large planks and beams, without any metal to hold it all together, were jaw-dropping.  In fact, the whole museum was so full of so many amazing items that it was actually overwhelming!

Eventually, we made it back to the apartment, had dinner, and then got to meet our nephew Dane, and his family, for ice cream and a walk along the sea wall near the sports stadiums and Science World. Science World is a large glass dome-like building that contains interactive science exhibits–like an exploratorium, it seems. None of my pictures really turned out from that, but it was a real treat to see Dane’s clan!

We got home after dark, which is pretty late that far north at this time of year.  I checked my email and found out that Jim had been selected for random Covid testing by the Canadian government.  We headed off to a pharmacy that stayed open until midnight, only to find out they just tested from 10 am to 6 pm.  We were, however, able to pick up an at-home test where you do the test on video with an official person.

Jim logged in and set up the test for 7 am so we could head out to kayak the next day.  He logged in at 7 am…no one showed…because he set it for 7 am Mountain time…and we were on Pacific…Oops. Reset it for 8:40 am Pacific. And got it done.

The pharmacy did not open until 9 am anyway, so it worked out ok.

We made it to the ferry dock just in time to get tickets for the 10:10 Ferry to Bowen Island to make our kayak time…Except there was no parking. Jim got out and bought tickets.  Erika still could not park. At her request, we abandoned her and ran for the ferry. We were the last to board. Even later than the cars. 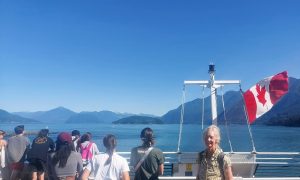 We reset our kayak time to 11:30 so we could wait for Erika, but when we realized we were not going to make that either, were told not to worry, as our time started when we pulled away from dock.  Back on the main land, Erika finally found a spot for the car and got the next ferry. Whew.

Kayaking on the ocean is a lot of fun! We saw some baby seals! The water was calm, too! 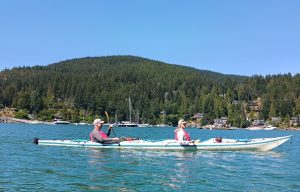 We left the kayak dock at 12:24 pm and pulled back in at 2:23.  Nailed that!  Except the one guy did not reset our departure time in the computer so the head guy was busy thinking we had drowned. And that also messed-up his schedule, so he was a little frazzled.  But since it was his guy’s doing, we were off the hook!

Then we hiked to a little lake on Bowen Island along trail that had horse friendly signs and a public arena. But, it was another case of no evidence of equine use anywhere and the arena was overgrown. 🙁

By the time we got back to Erika’s that night, again after dark, we were beat.

We had a nice breakfast at a cafe on Monday and then caught our (ON TIME) plane to Los Angeles.

Jim did not get his Covid PCR test result back until Tuesday, and it was POSITIVE! If we had still been in Canada, that would have meant a mandatory 10 day quarantine! Fortunately, we had planned a short trip and got out in time! Apparently, a PCR test can be positive for a up to three MONTHS after having recovered, which is why you can get a PCR that is positive and then enter Canada 10 days later, or something like that.

Our next jaunt, in less than a month, is to SOUTH AFRICA.  Fortunately, no Covid testing is needed, and we are fully vaccinated, boosted and re-boosted by our actual encounter with the bug.

In the meantime, we have a back country horseman project to pack in supplies for a trail crew. We get to go into a closed part of the forest, so that will be fun.  Lucy is packing.  Then the next day, she will be showing, because she is versatile like that.  Or she will be exhausted and want nothing to do with the show ring!

Here's the skinny: I have a thing for horses. They make sense to me. I have a small horse training business (it's a "boutique" training business, not because it's super fancy, but because the horses get a lot of personal attention). I also go by Dr. Wilber, and teach biology full-time at a Central New Mexico Community college.
View all posts by BlogPatty →
This entry was posted in The Write Horse and tagged adventures, The Write Horse. Bookmark the permalink.