First off, I am trying to write, and bugs, especially flies, keep landing on my computer screen and it is driving me nuts. Then, when I try to swat them, I am unsuccessful about 90% of the time.  It is a bit of a time suck.

But on to the NM Paint Horse Green Chile show at Wright’s Arena in Stanley, NM.  It was hot! But fun!

On Saturday, I showed LT, who was called into service because I was not yet ready to put Lucy back into a full day of work.  LT handled her cows very well, was fast but smooth in Ranch Rail, and after a bit of a kick out on her first Ranch Riding go, nailed her second try! Six first places and two seconds (not counting the kick out run where she was 4th and 2nd)!

On the other hand, she still hates Trail.  She sidled suspiciously away from the pinto bean bag holding up the log drag fence, tried to lope off when I asked her to trot while dragging the log, and would really rather not stand still to work a gate.

In Ranch Conformation, which was at the end of the day, she danced around and screamed as if I’d sent her to Siberia, all alone, despite the fact that she was in the same arena she had been in all day and there were five other horses in there with her.  Also, she is a tremendous athlete but does not have classically good conformation, so note to self for next year if I show her: maybe skip Ranch Conformation! I like Trail, so she may be forced to do that one.

On Sunday, it was time for Gino (with Christy) and Gette (with me). 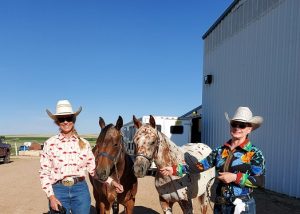 Me and Gette (Left); Gino and Christy (right).

We were in the fourth class of the morning (Yearling In Hand Trail) in the outdoor pen, so we got to that arena a little early to let them check it out.  Good thing!  Both of them were prancing about like high stepping Saddlebreds.  Gette also stuck her tail straight up in the air to help accentuate her big floaty trot.

Fortunately, they both settled down and by the time they had to show, they were focused enough to do their jobs and were not worried about working independently (as they are very good friends).

We got to do the same trail pattern later, in the indoor arena, and again they both were focused and did fine jobs! 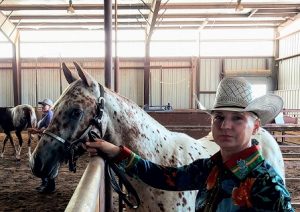 Gino and Christy waiting their turn in the indoor arena. 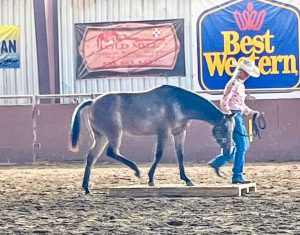 Me and Gette in Yearling In Hand Trail. Gette earned first places all around and got her first show points. Thank you Karen Hebert for the photo!

But even more importantly, I WAS ABLE TO RUN! Check out the video.  Do not watch Gette.  Watch me!  Running!

After that was Most Colorful at Halter, in which Christy and Gino got some Appaloosa points!  Gette stood nearby in sight of Gino, and that did help Gino stand still (a whole lot better than LT) in his halter classes!

A fun and successful show! Thank you to the NM Paint Club for putting it on! Their next show is The Red Chile Classic Aug 20,21 at the same venue.

(And Lucy will be back at it for the Red Chile show and the Aug. 14 NM Buckskin Association’s Ranch Horse Show in Bosque Farms!)

Here's the skinny: I have a thing for horses. They make sense to me. I have a small horse training business (it's a "boutique" training business, not because it's super fancy, but because the horses get a lot of personal attention). I also go by Dr. Wilber, and teach biology full-time at a Central New Mexico Community college.
View all posts by BlogPatty →
This entry was posted in The Write Horse and tagged adventures, horses, New Mexico, riding. Bookmark the permalink.