Lucy mildly strained some tendons in her left front leg. They seem to be pain free now, but I am giving her a month or so off.  That got me interested in looking at equine sports boot research. 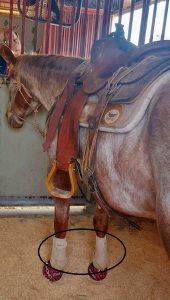 The general type of boots I am talking about.

Well. I was depressed by what I learned.

Firstly, there is very little research on the efficacy of sport boots or wraps for preventing injury, and the studies that do exist indicate that boots DO NOT prevent tendon injury, which was the major reason I used them. According to Glessner (2021) “While certainly able to protect from cuts and scrapes or add some flashiness to your look in the Dressage ring, boots and wraps do not provide sufficient support against the forces experienced by an equine limb during exercise.”

At a walk or trot, boots barely reduce fetlock flexion. No tests were  done at running speed, where the forces are much higher. The researchers concluded that the boots would not provide sufficient support under those conditions (Kicker, 2010, summarized in Glessner).

Secondly, “The hyperthermic effect boots and bandages create causes chronic microdamage to the tendon,” said Brock (in Beckstett, 2021), and the legs do not cool down to normal temperatures even after THREE HOURS (Brock and Spooner, 2021). Polo wraps are the hottest!

Brock and Spooner’s work supports earlier research as well. “It is clear from the resulting average increase in temperatures that both boots and bandages insulate the limbs during exercise, and could possibly result in detrimental effects on the tendon during high intensity exercise.”  (Solheim et.al., 2017).

Physiologist and biochemist Dr. David Martin in a 2020 article, apparently citing his own research, says that 10% of tendon cells in culture died when exposed to 113 degrees F for 10 minutes, and 80% died when exposed to 118.4 degrees F for 10 minutes.  This apparently was supported by a later study in Japan.  Martin, Wilson and Goodship, in the 1990’s, found racehorse tendons can reach 113 degrees F during galloping. Into the death zone.  Presumably, the insulative nature of a boot could push the temperature higher, increasing cellular damage.  The skin temperatures in the Brock and Spooner study were lower (96.8 degrees F) than that, however.

Whenever I pull off boots, they are wet with sweat.  Have I trapped the tendons in a cell death sauna while thinking I was protecting my horse?

Thirdly, I always thought I needed to make sure the boots were on there snuggly. BUT, the result of that snugging might be reduced blood flow, according to Morlock, et. al. 1994.  Great. Blood flow supplies oxygen that cells need for function, so I baked the cells with the boot and then tried to suffocate them.

Then I started thinking about race horses.  Many are unbooted.  Why? According to Martin (2020), most tendon injuries are now thought to be caused by chronic inflammation as opposed to a single acute, so keeping the temperature down is really important to reducing chronic cellular heat stress. (Yes, I am feeling worse and worse about using those boots.) In addition to lowered heat load, reducing chance of abrasion under the boot, not reducing blood flow, maintaining maximum range of motion, avoiding contact dermatitis, reducing weight to decrease muscle fatigue, and avoiding inappropriate pressure points which can lead to inflammation of a different type are all reasons that race horses often do not wear boots.

Not one article was willing to step out and say, “Do not use boots”. They all say something like, “If boots are to be used, make sure they fit, are not too tight, recognize that they won’t prevent tendon injury, bear in mind they should be worn for as short a time as possible, and the legs should be cooled after use.”

As contradictory to “what every one does” as it feels, based on the research, the bottom line really does seems to be AVOID the BOOTS.  They do not provide documented protection against acute tendon injury and do contribute to overheating which causes “chronic microdamage to the tendon.” (said Brock).

Sigh. It will feel weird to leave the boots off.  Also, I just spent 85 bucks on a new pair.

Brock, L. and Spooner, H. 28  A comparison among equine boots and legwraps on leg surface temperature during and after exercise. Journal of Equine Veterinary Science Volume 100, May 2021, 103491

Here's the skinny: I have a thing for horses. They make sense to me. I have a small horse training business (it's a "boutique" training business, not because it's super fancy, but because the horses get a lot of personal attention). I also go by Dr. Wilber, and teach biology full-time at a Central New Mexico Community college.
View all posts by BlogPatty →
This entry was posted in The Write Horse and tagged horses, riding, The Write Horse. Bookmark the permalink.