Bascially, we rode around a mesa in the White Ridge Bike Trails area, starting from the west side, not the east side where the bike trail parking is located.  This trail system is open to hikers, cyclists and some trails are open to horses. None of the parking on the east side is set up for trailers, so far as I can tell.

We picked a weekday with high winds (yes winds–they are still blowing, like every NM spring), so the cyclists apparently stayed home and we only saw one hiking group. Also, coming from the west, saw only one sign for a trail closed to horses…

Our first objective was the “jail”.  To get to the jail, we had to cross the stream (there was water), go through a saddle and turn left.  The left was along a powerline road, but that was not in the directions….but we found the jail! 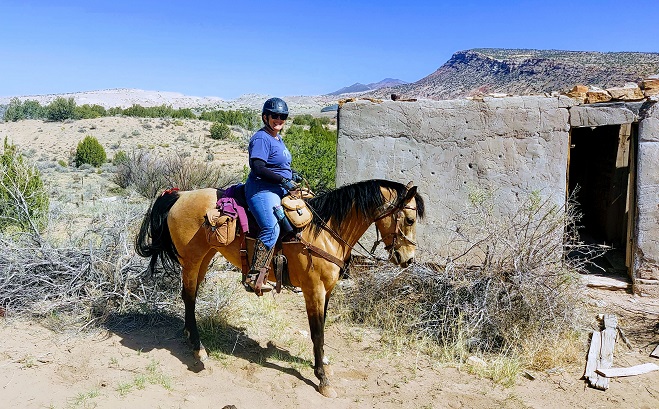 Patty and Zima, at the jail. Was it really a jail? We do not know, but the building did have barred window openings! There were also old pens and and an old stock tank (dry), so at one time people probably lived there.

From there, we went around the north side of the mesa and eventually up a hill through some uplifted rock.

Lots of layered sedimentary rocks of brown, and later pink and cream and yellow and green. Dinosaur fossils have been found nearby. Those wide open views make my heart expand! Land of Enchantment. L to R: Mary Ann, Siri, Patty S., Linda.

Our directions said to continue south and up to to the “white/water area”. What the heck did that mean?

Well! High on this ridge is a series of low white and cream colored domes where gypsum rich water seeps out.  The gypsum precipitates, leaving, basically, hard water deposits.  This is the same process that produces soda dams and stalactites (which I thought was spelled “stalagtites”, but nope, stalactites and stalagmites…).

The water flow was almost nil due to the sustained droughtiness of NM, but the fact that these seeps were so high on the ridge and the magnitude of the mineral deposits, it was another wonder to see!

At the top of the climb, we were to leave the jeep trail and head “south on the white looking ground trail.” 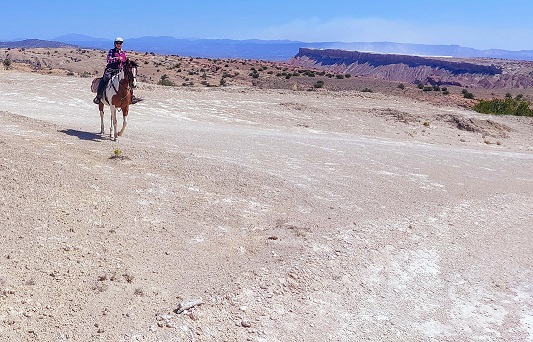 Mary Ann, on the white gypsum deposits, near the top of the climb. Also, at the top right of the photo, you can see gypsum blowing off another mesa in white clouds and the smoke from the Cerro Pelado fire behind that.. 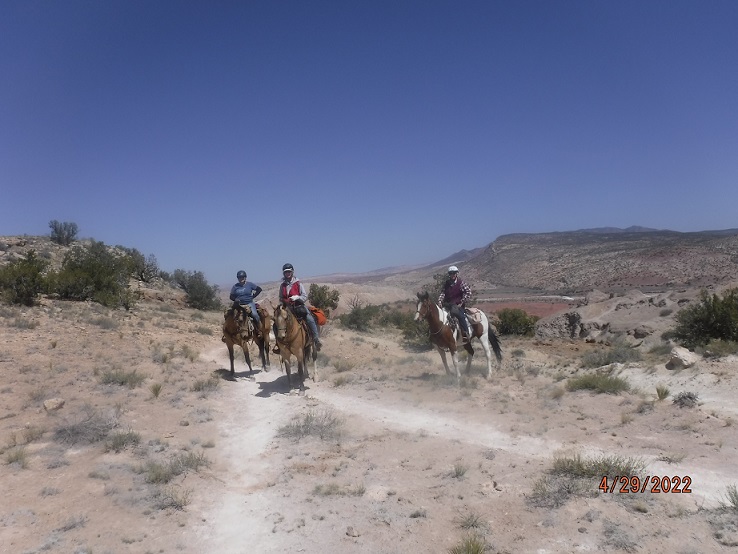 As we made our way along the white trail, we knew we were looking for a skinny ridge trail.  We came to a junction and to the right was a SKINNY ridge trail. As in the there was a very narrow trail with precipitous drops offs on both sides that appeared to lead to an extremely steep descent into the canyon to our right.  We looked at that for a few minutes and then we all decided that it was Not a Good Idea, so we bore left and soon came to another section that gave us pause.

This was the actual “skinny” section.  It went up over a little rise then dropped onto another thin ridge.  I went first on LT.  To me, the over all impression was that we were about to ride onto a hanging bridge. Ya, so it was made of dirt and stone and not wobbly. I am really not a fan of drop offs, so my breath did get a little shallow. Fortunately, LT is a good lead horse and also super handy, which is a confidence booster. Also, although the big picture felt daunting, each step forward seemed quite fine. 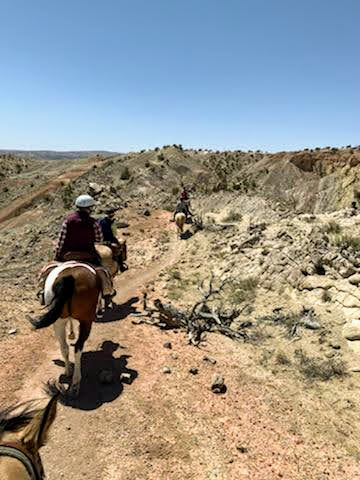 This is the start of the skinny trail. No one took photos in the middle of the “bridge”. I think we were all just concentrating on making it to the opposite side. Picture by Patty S.

Once we got onto the opposite ridge, we found our next objective: A parking lot!  At the parking lot, we could not find the jeep trail, but we had made it to the south end of the mesa so we knew that if we kept the mesa on our right, we would make it back to the jail.  Also, the GPS thought we were on a trail.

On this section, we pulled into a canyon of yellow and pink stone, out of the wind and had a really pleasant lunch. Except I left my little cutie oranges in the cooler in the truck! (They made a nice snack for the drive home.) After lunch, we soon hit an obvious jeep trail that went directly to the jail.

My phone died somewhere before this, (should have put it on airplane mode!) so I did not get any more photos, but the rocks on this part were again beautiful! Pink and cream stripes and sections of green!  There were several old water developments, but none seemed active.

Another amazing place and only an hour from my house.  New Mexico is one of most geologically and ecologically diverse states in America and it sure is fun to explore especially with just (sort of) written directions!

3 Responses to The Written Directions Adventure