An Afternoon at the Barn

After a night of snow, the sun was out and the wind was calm, so the horses took the opportunity to snooze it up in the afternoon (35F). 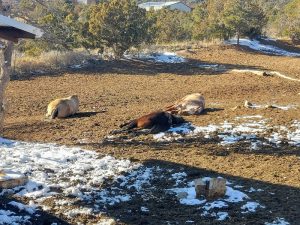 Sunbathing in what’s left of the snow. We had gotten about four inches of light fluffy stuff that melted away in the sun, but it held on anywhere that had any shade.

When they saw me watching, LT and Lucy perked up.  Breeze kept on sawing logs! 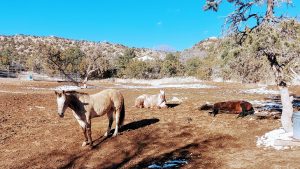 LT says, “we can’t let her catch us laying down on the job!” LT tends to be a hyper alert, overly sensitive sort. Breeze was not even in the same room as the memo!

When Lucy got up, I brought her in for bucket training, since despite her general low key approach to life, she had decided two weeks ago that buckets were the epitome of evil.

She went right for the  pellets and grain in the bucket, but while she is a sucker for food, she still does not trust that bucket!  Any little sound or movement, and she left.  You can see her back legs are not in a “Boy! I am so relaxed!” posture.  She is ready to split as needed.

But she kept coming back! 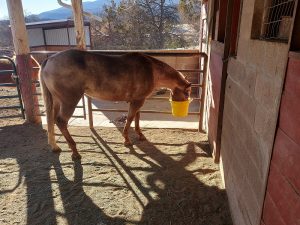 Lucy eating out of a bucket! But she is ready to flee.

Shelley’s Apple (the Appaloosa), who is two, is super “helpful”, energetic, busy and inquisitive. She is constantly bouncing around Uncle Deets, trying to convince him to run around the pen with her for a few hours per day.  When he declines, she doesn’t go away.  She persists! He stoically ignores her, while still being nice. 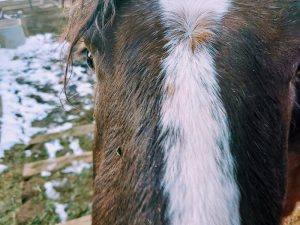 Apple! “what r u doing? Huh? Huh?” She is very outgoing! I like the brown spot in the middle of her blaze.

On the opposite end of the spectrum is the newest arrival, Courtney’s Rigby.  She is here to be started under saddle. She was so quiet and very retiring on Tuesday that it was hard to raise a trot during ground work in the round pen.  By Thursday, she was starting to move more readily and make some of her thoughts on matters known. I will be curious to see what the variety of training activities and the stimulus of the goofballs in my barn brings out.

I spend a part of almost everyday with the horses, and everyday I still get a kick out their different personalities (horseanlities if you prefer). They surprise, amuse, and amaze me. Can’t beat that!

Here's the skinny: I have a thing for horses. They make sense to me. I have a small horse training business (it's a "boutique" training business, not because it's super fancy, but because the horses get a lot of personal attention). I also go by Dr. Wilber, and teach biology full-time at a Central New Mexico Community college.
View all posts by BlogPatty →
This entry was posted in The Write Horse and tagged adventures, happy sigh, horses, New Mexico. Bookmark the permalink.

1 Response to An Afternoon at the Barn