Last weekend was the first New Mexico Buckskin Horse Association all breed training show of the year!  (The next one is March 6th). Of course I wanted to go and take a few horses, but the 2004 truck is again in the shop, needing a new transfer case.

I had to beg a ride from Christy and Deets instead of me giving THEM a ride.

I drove my own car so that I could load all my equipment the night before to make departure easier the morning of the show. When we got there, I parked near the trailer.

Lucy had been on Platinum CJ and Red Cell to see if I could increase her  energy levels.  I had not seen much difference so I dropped the Platinum and added Mojo, a less costly joint supplement.  Her work rate definitely went up and out in her 1/2 acre pen, I have see her instigating match races with LT and not being out run.

BUT last month in Las Cruces, she was tied in the warm up area and spooked and set back when a horse moved “too near” her, which is not like her at all.  She used to just go to sleep when she was not performing.  Then at this show, there was no sleeping during her down time, she startled at some dropped exercise boots and then while tied, had a panic attack over a water bucket. She slammed back, which yanked the tie hook completely off the side of Christy’s trailer and she kept going backwards right into my newish (2020, 8000 miles) little Kia!

She smushed the front panel of my Kia!! (Lucy herself was unharmed.)  The Kia will be sent in for repair (I have comprehensive insurance on it), after I get the truck back…

So, new plan: remove the supplements, and do some desensitization-while-tied exercises with her. 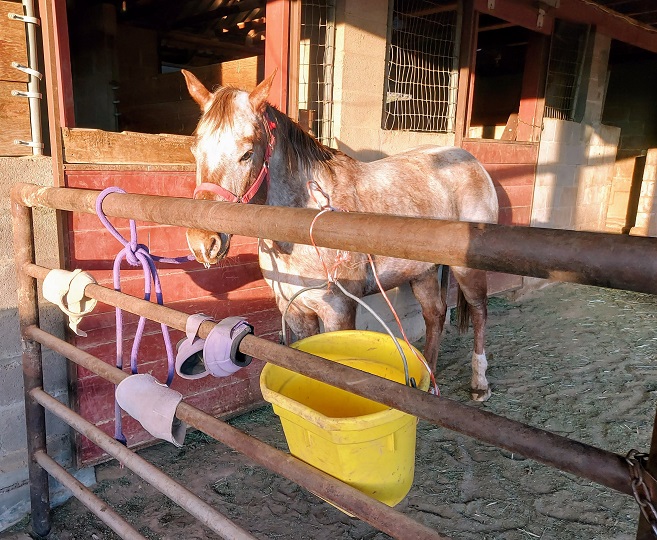 Lucy looking askance at the fence decorations, especially the bucket, which is clearly an evil doppelganger of the original evil bucket at the show.

I have been tossing things out of the tack room door (which is on the Not Horse side of  the fence), tying (as you can see) things to the bars, moving around abruptly, etc. I also put a treat in the bucket, because Lucy is a sucker for treats, but she would not have anything to do with it!

I moved Lucy to get ready to do some round pen work, and little Apple, (who belongs to Shelley and might be two come fall) stuck her head right in the bucket for the treat, and then untied it, so it fell to the ground.  Since I was between Lucy and the falling bucket, Lucy was ok with that.

The next day, Lucy her alfalfa and Pharm Aloe pellets in that very bucket, but she would not touch them until I held the bucket and tipped it so she could nibble at her food from the edge.  Gradually, she starting putting her nose in farther and farther…..but would pull it out quickly if anything rattled.

The day after that, I filled up the bucket, tied it to the fence and when I came back all the food was gone! Lucy is pretty food motivated, so this ought to help her find her love of buckets. Removal of the Red Cell and Mojo from her diet should help her feel less spazzy over all.

Hopefully, she will retain her increased work rate, and if not, we can try reintroducing the supplements at a lower rate of intake!

Other than the car smushing event, the show was fun and included a first place in HALTER for Lucy! Yes, we are going to show halter this year, as it will be a requirement for year-end awards, so I figured we would practice…