In the horse show world, a senior horse is not at all old. Junior is five and under.  Senior is six and up.  Lucy is six this year and so she is now a senior horse! 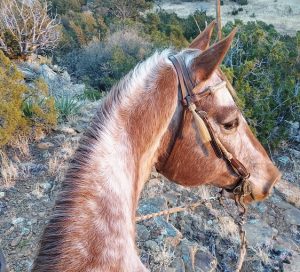 Aw! Lucy on the trails at the house this week.

Last weekend, Jim joined me, and we went south to Las Cruces, NM for a Southwest Quarter Horse show. (They had All Breed classes, so Lucy could show.) The show management was wonderful.  The judges were good!

Unfortunately, three of my four cows were above my pay grade, and I had trouble controlling them. It was humbling. Forget humbling.  It was downright depressing.

However, I am lucky enough to have the help of Darren Miller for our cow horse stuff, and he feels we have enough going for us that we will be able to raise our game a couple of levels. Super happy to have a close cow horse coach, again!

Here are some good points from the show: We had credit earning stops and spins on the dry work!  Those have been slow in coming for me and Lucy, so I am happy about those. We won ranch trail and got second in ranch riding, which was satisfying after the cows. 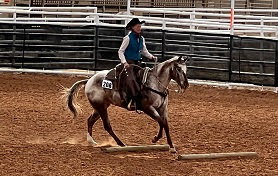 Lucy has a nice uphill way of going, and a nice expression, over the logs. Did not nick a thing. Photo by Jim. 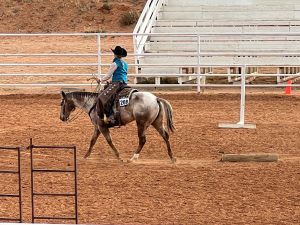 Lucy says trotting with a log is super simple. Photo by Jim.

Lucy did run harder than she ever has, and on one go, we worked so hard, I lost my hat (which normally stays on) and the pony tail holder fell out of my braid! 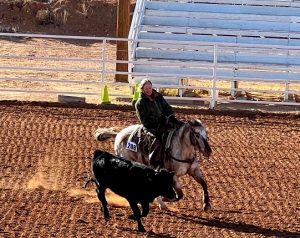 Lost my hat. Lost my hair tie. Can’t sit straight on a horse, and I am wearing five layers of clothing because it was in the 20’s early in the day. We did circle up well! (And while it had multiple technical errors, it was a thrilling run.) Photo by Jim.

It might be tempting to blame the tough runs on the cold temperatures Sunday morning, or the feisty bovines, but as Jack Yonkers once told a whining me, “Just get better.” So, that is what we are planning to do.

It was a lot of fun to have Jim along.  We hiked with the dogs on Saturday afternoon.  We went to a waterfall. Yep.  There was a trickle of water sliding down a rock face. Counts as a waterfall in New Mexico. 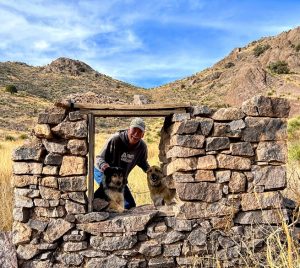 We stayed on site at the show (right next to Lucy’s stall) and we did NOT use our catalytic heater, despite the fact that the Saturday night temperatures were to fall into the 20’s.  And it did reach about 23F. We slept just fine under all our blankets and it warmed up a bit inside when we made breakfast.  After we ate, we were out and about, so no need to heat an empty space! I don’t like being cold, so when I say it was fine, you can believe that I was comfortable.

This was the first horse show that the dogs got to attend together.  Jim said they enjoyed watching some of the goes, but they actually perked up and watched my run with particular interest.  They recognized me and Lucy! 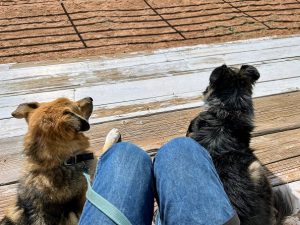 Lani (left) and Coulson (right) watching one of our cow goes.

When our two kids were playing soccer (which means from age four until they finished college), we travelled fairly often to Las Cruces for tournaments. One thing we liked to eat was Caliche’s frozen custard. We paid them a visit after our hike. I went for hot fudge and salted pecans and did not get:

“Our famous Green Chile Sundae is served with Caliche’s very own locally grown and made Green Chile Topping. Served with your choice of nuts. Ask for a sample!”

Yes, they have green chile custard.  And chile is spelled “chile”, no matter what spellcheck thinks. 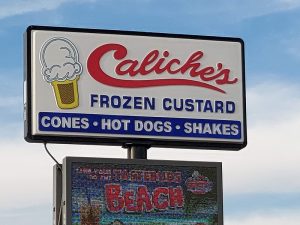 It was just as good as I remembered.

Here's the skinny: I have a thing for horses. They make sense to me. I have a small horse training business (it's a "boutique" training business, not because it's super fancy, but because the horses get a lot of personal attention). I also go by Dr. Wilber, and teach biology full-time at a Central New Mexico Community college.
View all posts by BlogPatty →
This entry was posted in The Write Horse and tagged horses, New Mexico, riding, The Write Horse. Bookmark the permalink.