The Canadians Made it!

Christy and I were going to have a great adventure driving to the U.S./Canadian border at Sweet Grass, Montana over Christmas to pickup our 2021 Appaloosa models, Gino (Drivers Seat) and Gette (Suffragette CD), bred by Heather McLevin and Jim Dobler at Thunderstruck Ranch. But then new COVID restrictions made a quick back and forth crossing difficult. I was both disappointed (that would have been a fine blog, I could have seen Stacy Boswell, and met Heather in person!) and relieved (who cares if it is a high of -12 F in Sweet Grass and the wind is blowing 100 mph in Wyoming?).

Luckily, a good friend of Heather’s, Les Timmons (who trained the Hall of Famer High Sign Nugget, Gette’s and Gino’s grandsire) was hauling to Amarillo, leaving Dec. 28th and would be passing through Raton, NM.  Raton, at 220 miles from us, is a lot closer than Sweet Grass, MT (1297 miles).

Christy and I left in the pitch dark at 3:45 am on Dec. 31 in order to meet Les and the kids at 7:30 am in Raton. We pulled in at 7:20.  Les was already there.  I held the door of his 10 horse trailer while he unloaded both babies together. (They had travelled loose together in a double slot.)  Then he led them seamlessly to Christy’s trailer where they loaded, simultaneously, into the double slot she had rigged up, with no hesitation.  It was impressive. 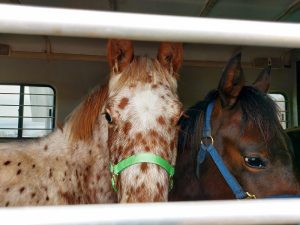 Gino left, Gette right. “as long as we have each other…!”

We got back to Christy’s by 11:30am, just before a predicted storm (that did not actually arrive until the next day and did not dump 10 inches of snow as forecast.) 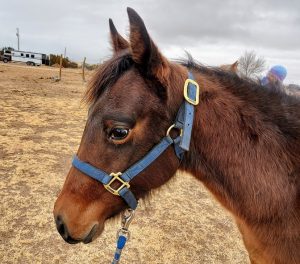 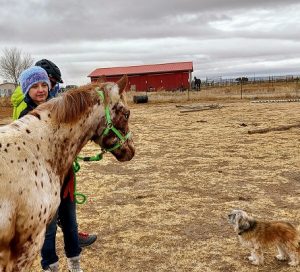 Gino and Christy, Milton the dog, and Lee’s head.

The ponies were both a little shocked. “Toto, I’ve a feeling we’re not in Kansas anymore.”

Christy’s older gelding, Lamont, was also a little shocked that he was going to have to share his…anything…with those two little interlopers. Deets was more accepting.

We ordered all day snow, sleet, rain and wind for New Year’s Day just to make them feel more at home. We had a little fun on the 2nd (sunny, 23 F, breezy–just a bit nippy), getting to know them.

Gette comes right up to be haltered and Gino, while not quite as used to it, is definitely catchable, especially because the two of them are inseparable, so if you catch Gette, Gino will be right there.  They are rarely more than five feet apart. 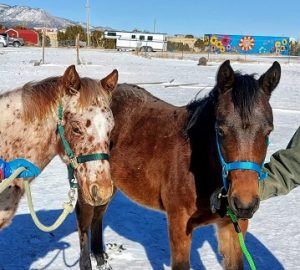 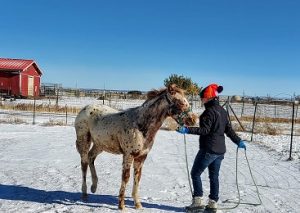 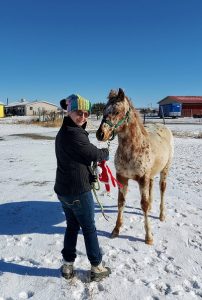 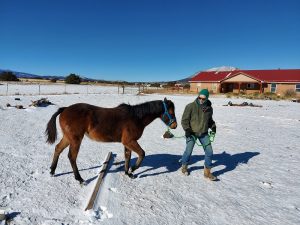 Me and Gette, future trail whiz. She can even do big logs (so can Gino). They both hopped the big log the first time and stepped over it thereafter. Also, Christy’s husband, Lee, has a mountain bike course on the 10 acres. Both kids were fascinated when Lee jumped an obstacle and they started to chase him…bet they have some cowiness! 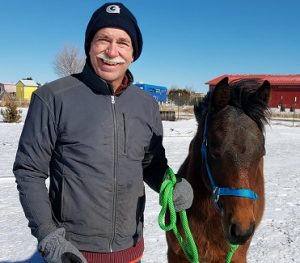 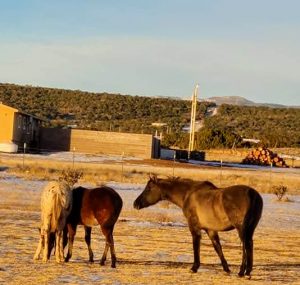 Jan. 4. Lamont says, “they don’t smell that bad.” Gino and Gette, of course, are currently attached at the shoulder. Photo by Christy.

Gette will stay at Christy’s at least until summer.  They two will have each other to play with, 10 acres to run on, and Lamont to be their big brother (because Deets will be over here getting ready for show season).

Tuesday night Christy came home after dark and the babies were out in the pasture where she could not see them. Christy called out, “BABIES!” and they both came running for their grain!

This is gonna be some fun!  Big thanks to Heather and Jim!

Even though Gette looks like a solid bay in the pictures, she has one LP gene (a gene that leads to Appaloosa coat patterns). She has the Appaloosa characteristics of mottled skin, striped hooves, white sclera, and white hair and spots on her butt. By the time she is five she may look like her 3/4 brother Mitch (You CD Signs).  They have the same mom, AQHA Big CD Lights.  Mitch was sired by High Sign Nugget and Gette by a son of High Sign Nugget, Total Blam Blam. (Gino was also sired by Total Blam Blam!) 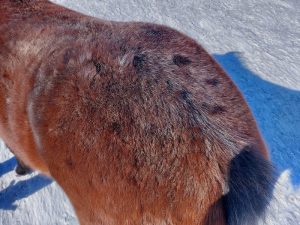 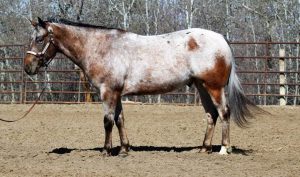 You CD Signs (Mitch), at about 5, bred by Heather McLevin, owned by Ardith Montano.

Gino has a red base coat and has one LP and one PATN1 gene.  “Horses with N/PATN1 genotype that are also LP (N/LP or LP/LP) will have high amounts of white patterning (typically more than 60% at birth).”

Here's the skinny: I have a thing for horses. They make sense to me. I have a small horse training business (it's a "boutique" training business, not because it's super fancy, but because the horses get a lot of personal attention). I also go by Dr. Wilber, and teach biology full-time at a Central New Mexico Community college.
View all posts by BlogPatty →
This entry was posted in The Write Horse and tagged adventures, horses, New Mexico, The Write Horse. Bookmark the permalink.

2 Responses to The Canadians Made it!