Home from The Appaloosa World Show

We made it home from the World show safe and sound and we made top ten in four events. I had hoped to make top five in a few, but over all I was really pleased with Lucy!

Our first class was Jr. Ranch Reining and we ended up with our highest place (6th of 10) because we ran a solid pattern and hit all our lead changes with no kicking out or breaking gait, and Lucy was focused! That was exciting!

Next was Jr. Ranch Riding, which is one of my favorites, but I did not ride assertively enough and I (along with a lot of other people) missed the critical “simple lead change” instruction (usually it says simple or flying) and I did a flying.  This put me off pattern and out of the placings.  But even if I had executed the pattern as written, I am not sure that would have put me in the ribbons because some of my maneuvers were just not crisp enough.  I was bummed. 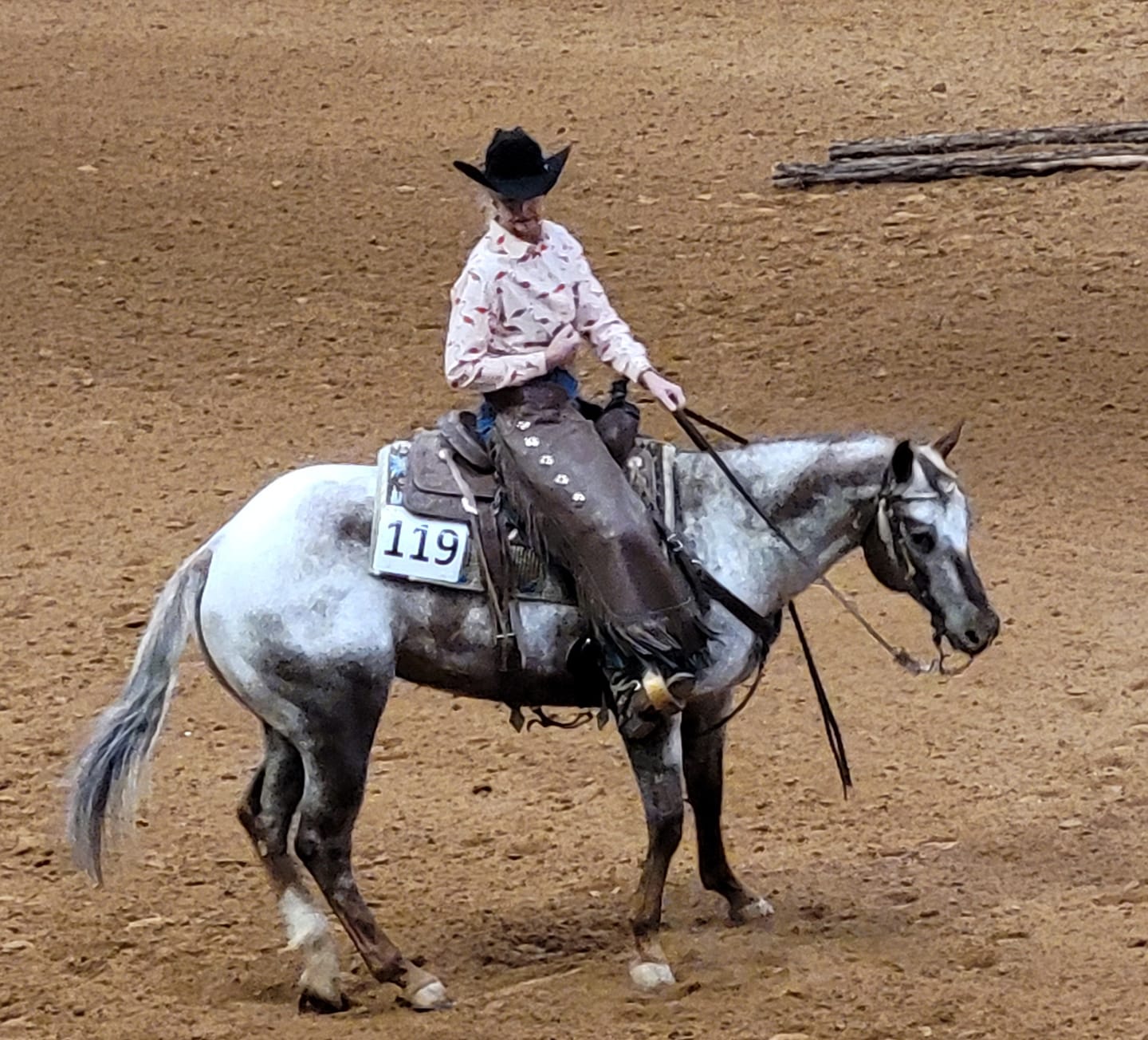 My third class was Jr. Working Cow Horse.  I really like cow horse! Lucy upped her dry work score by seven points over her reining score, got a spin with no deductions (spins have been hard for us) and slid her best ever.  Her dry work score was about middle of the group.  When our first cow came out, Lucy hesitated and our cow left us.  Fortunately, in Appaloosa, I can call for a new cow, so I did.  On the second cow, she cowed right up.  We should have held the cow at the end of the arena longer (but we got some nice turns).

Then, we went up the fence and Lucy stayed right on it.  She did not get out run!  All my body work and chiropracting and eliminating wool saddle pads and anti ulcer medication is paying off!! We made our first turn! Then we made our second turn! And then I screwed up!  Instead of circling up right then, I made two extra turns and lost a bunch of points. We ended up 9th…out of nine, but hey we did not DQ.

So far, Lucy was out showing her rider!

Jr. Ranch Rail Pleasure is my least favorite class, because I like the classes where I have a lot of stuff to do, but I might have to change my mind about that.  There were 22 entries, all in the arena at the same time. Lucy rode super relaxed and steady from the initial trot in, on. The class was lengthy and I began to wonder if I could keep her moving out well long enough! I ended up with a 2nd, a 7th, and two no places, for an over all 8th place.  I was very very pleased! A second! Also, a lady sitting next to Jim in the stands said Lucy was her favorite, so that was cool! 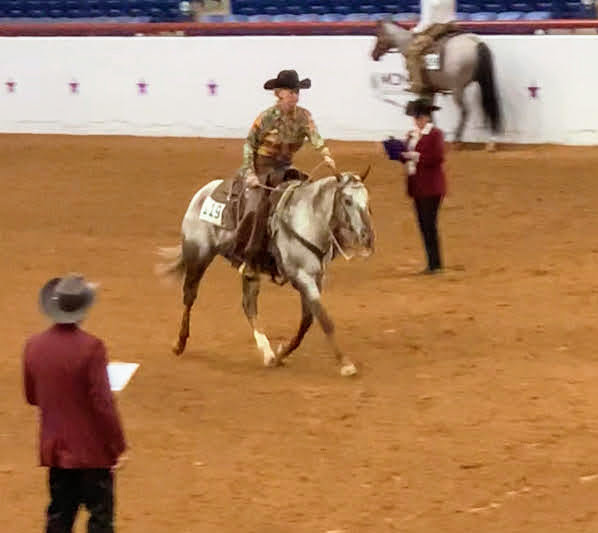 The initial trot in was down the center and Lucy really moved out well. It was fun to ride. Also, I guess I need a brown hat.

Last was Jr. Ranch Trail.  I like this class and felt like we had a really good shot at a top result. In we went.  The bridge and logs went great, and then Lucy looked over an saw the lovely cattle and wagon wheel banner they had put on the the wall.  They were quite attractive, I thought, but Lucy thought they were horrible.  Like “where the heck did that stuff come from?! that was not here the OTHER four times i have been in this arena!”

I got her around the trot obstacle but it was a struggle since she was rubbernecking at the banner, and we lost points.  We had a nice lope off, not looking towards the decorations, and then we had to turn toward it. Lucy bunched up under me and I could feel her losing her forward momentum.

She jammed to a stop.

I got her going again and made it to the hay bales and the real cattle but that stop had counted as a refusal (-5) and the break out of the lope was a -3.  I was really bummed.  I debated for a split second about quitting right there, but then I decided to go on.  The rest of the pattern was actually excellent. Excellent enough that despite that HUGE error at the start, we ended up 8th of 19 entries. (And the judge that was Lucy’s fan in the ranch rail had her 5th!)

That caught me by surprise. I had put Lucy up, figuring we had no hope, but a lot of horses had some trouble with the wall art, and not many were as solid on the other parts! 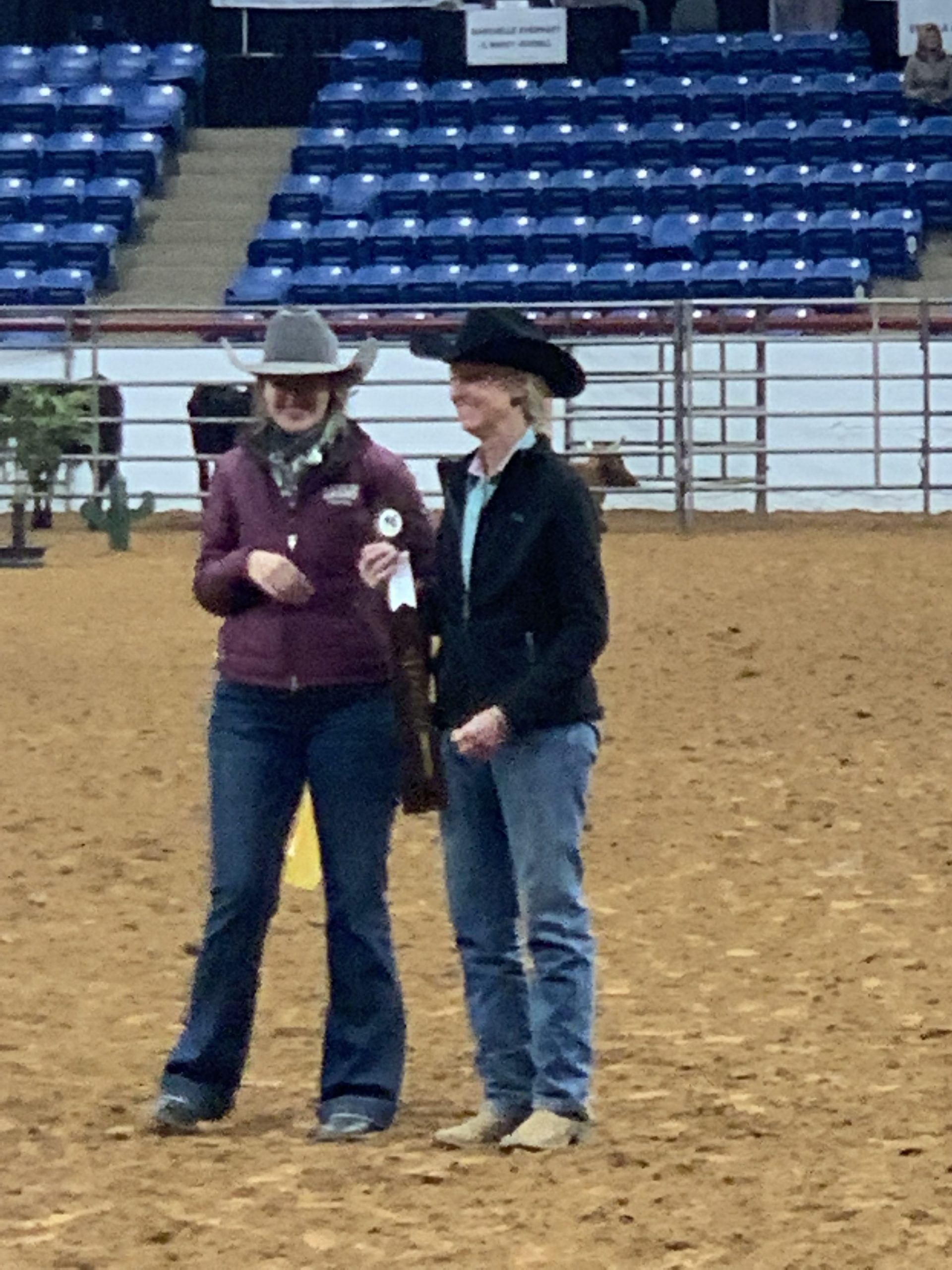 Over all, Lucy ribboned in four of her five events. She was 18th of all the ranch horses (more than 45), both Jr. and Sr.  She was top ten among the junior ranch horses (I think about 5th–I had to guess on that) and she was one of only four junior horses that competed in all four ranch performance classes and also did cow horse. (I REALLY think there ought to be a cow class in the ranch group like they have in the Paint Association–box drive box drive would be the perfect class.)

I am pretty proud of my Lucy!

Here's the skinny: I have a thing for horses. They make sense to me. I have a small horse training business (it's a "boutique" training business, not because it's super fancy, but because the horses get a lot of personal attention). I also go by Dr. Wilber, and teach biology full-time at a Central New Mexico Community college.
View all posts by BlogPatty →
This entry was posted in The Write Horse and tagged adventures, horses, riding, The Write Horse. Bookmark the permalink.

3 Responses to Home from The Appaloosa World Show