The Best of Texas Premier Horse Sale, is in the books, and H did sell!  He was not a top seller (spots were not hot at this sale and the three spotted horses were at the low end), but it was still a bigger pay check than we were looking at in a private sale, so I was very satisfied!

It was an interesting process!  I probably will not go into big-time horse flipping, but I am telling you, it pays way better than training outside horses or showing Appaloosas!  A grade draft cross went for well over 250K!  I am not kidding.

Here is the run down on how it worked.

Judith and I hired Rachel Pozzi of Free Bird Performance Horses to help us do this thing.  She nominated H, did all the paperwork, compiled all the photos and made much of the video we needed.  She was fabulous.

After he was accepted, she did additional posting of material and the sale management.

The sale was a three day event.  Day 1 was check in, general warm-up riding, and sale numbers were painted on.

Day 2 had three parts.  The Sift, The Demo, and the Meet and Greet.

Day 3 was the auction. 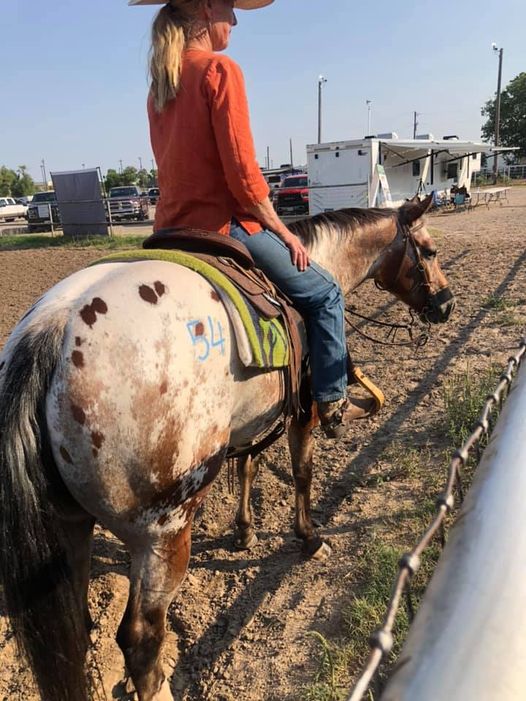 The Sift. Without any warm up of any kind allowed prior to the start, the horses, in lot order, went into a small round pen where they needed to trot or lope both directions to check for soundness.  Then they were to stop, and you had to catch them.  The pen manager took notes and you were supposed to get extra credit if the horse faced you.

H usually likes to kick up his heels a bit in the round pen, but for this, he trotted, turned, trotted, stopped, looked at me and when I said “come here”, he came!  Aw! I may have gotten extra credit…but it did not result in a huge sale price! (Big enough, but not 200K!!)

Next we went to another area, where I tied him up, and picked up all four feet.  Then I saddled him (from the off side, because that is always what I do).  Next, I got on, and we had to lope directly off.  He did fabulously!

A few horses failed to lope well, and a few picked up the wrong lead, but that did not seem to negatively affect their sales…Very interesting.

The Demo.  Right after The Sift, again in lot order, we did The Demo.  Below is mine.  It was supposed to be three minutes, showing off the strengths of your horse, and I just went on and on and on.  It is kind of embarrassing to have been THAT trainer.  If I do this again I will be MUCH more concise. Rachel very wisely filmed it.  The Internet connection at the venue was not good and the livestream was not good, so she posted this for us.

H was so sweet and quiet, and the announcer said that he didn’t think he had ever seen such nice lead changes!  Almost no one did lead changes even though almost all the non draft horses were stock type horses.  Apparently, lead changes are not as hot a selling point as a full mane and tail!

I was super proud of him, even though I worried that he was SO quiet that anyone that bought him might have ended up wondering what happened when H revealed his big motor and high play drive!

You can put this on double time, and then it will last three minutes!

After that demo, I got to put him on cows. He stayed quiet and made a couple of good moves.  The cows were pretty over it by the time I had my turn.

I did have two people ride him.  The older woman rode him great, and the (adult) daughter got about four lead changes on the straightaway as her legs were a little busier than H was used to.

Several people visited with us at the Meet and Greet.  One person asked if he might make a great horse for little kids since he was so mellow.  I said that was not likely to be a good fit.  One person wanted him for Ranch Riding, the event, and trail riding.  That would have worked well, I thought. I mean, H did get a first and two seconds in Ranch Riding a few weeks ago, splitting with Lucy. And he has been all over in the mountains.

The sale.  It was at Billy Bob’s at the Stock Yards in Fort Worth, and they were supposed to have our video playing while we rode around in the auction area, but they were not able to pull that off this time.  That was too bad because we had such a very cool video that surely would have jacked his price up to 400K (lol). 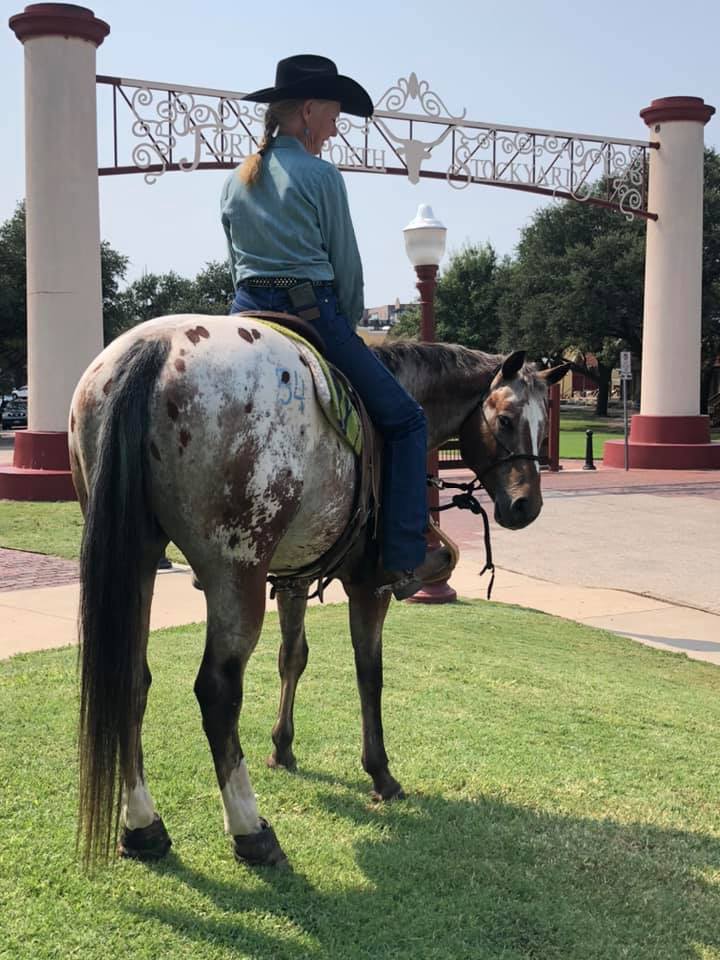 Look he rides in a halter!  We are in front of  Billy Bob’s. Photo by Rachel.

He again was super settled and I was able to walk, trot and lope him in a tiny space with people sitting right at the edge of the ring.  Good boy!

He sold for 20K, and although at that point we were feeling greedy and were hoping for a lot more, it was above our reserve. We had no idea to whom he sold, though. 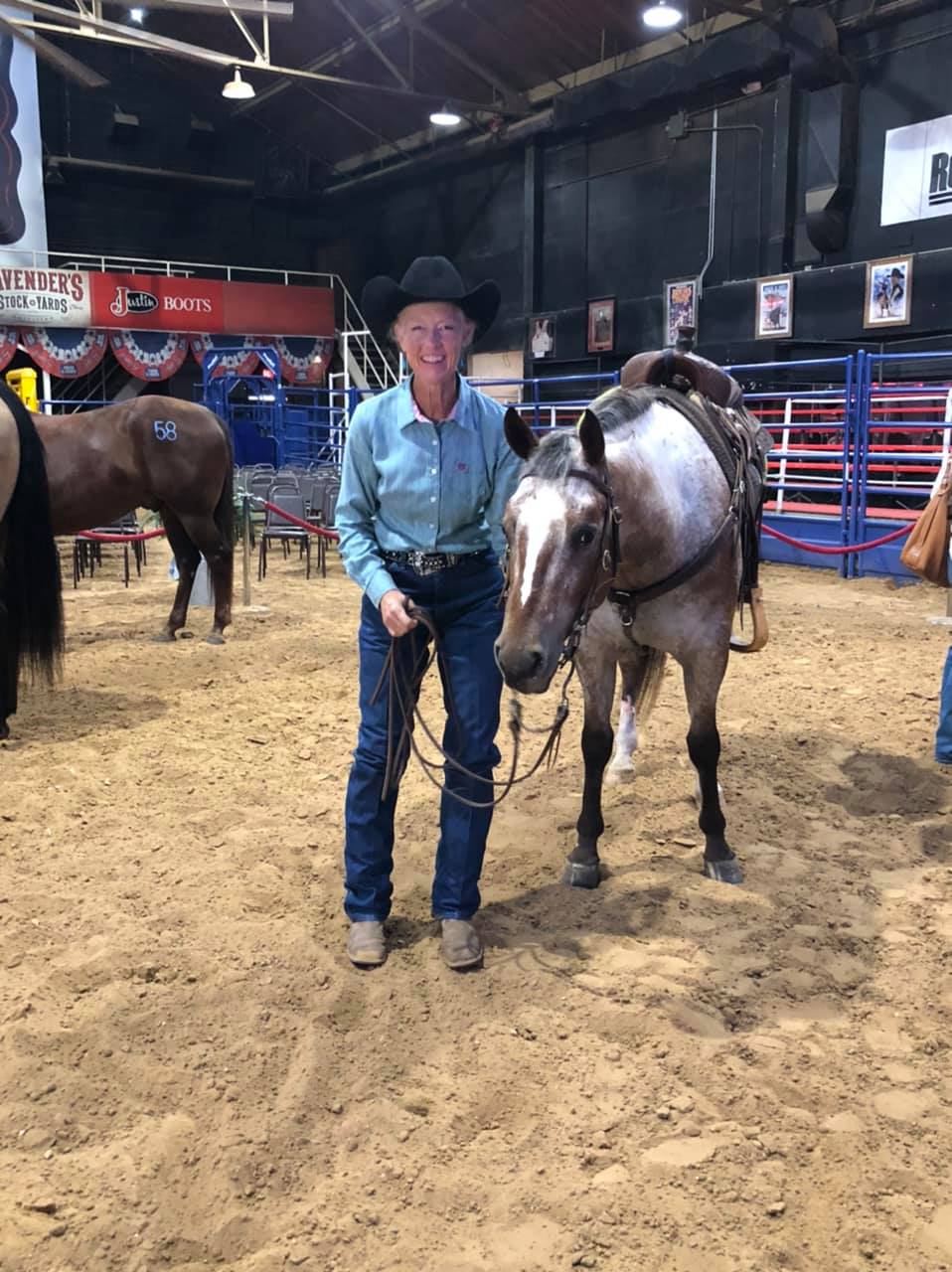 In the sale area prior to the start of the auction. Photo by Rachel.

There was a bit of drama on the pick up when a very brusque guy loaded H into his trailer without even looking for us (we were on the other side of the trailer!).  He said he had “bought and paid” for the horse, and he offered a few other unsatisfactory/rude sentences of conversation that do not bear repeating. But he did snootily mention that H was going to go to the Northwest and top 5 cow horse trainer Justin Wright….although Justin Wright is in Southern California… So maybe he said Justin Bailey, who is in Oregon. (Yes, it was a very rushed and rude conversation.) If H IS going to either place, that could be quite fantastic.

In a bit of a panic after that, we rushed up to the office to confirm the sale, and for just 25 seconds or so, the office was reporting that the horse had NOT been paid for.  They quickly corrected themselves.  Both Rachel and I about lost it in that 25 second window.  It actually took us both a couple of hours to recover.

I was sad because I had wanted to say goodbye to H and chit chat a little with the new owner, which obviously did not occur.  I found out later that the jerky guy was a transporter and H went to a horse trader who seems to specialize in reiners. I will leave the trader unnamed.

That last bit was no fun, but was also a very unusual occurrence.  Most of the horses go to private homes.

I would be willing to try it again! I really liked the sale company!

Shout out to the Davis family with KD Performance Horses in Utah. Super folks and nice horses! When in a new venue, it is so nice to have someone go out of their way to be friendly (especially since I was probably going around looking shell shocked!).

I also met the fabulous barrel racer Jean Winters–she commented on my flamingo shirt and we just hit it off! That was fun for Rachel, too, as she is also a barrel racer! 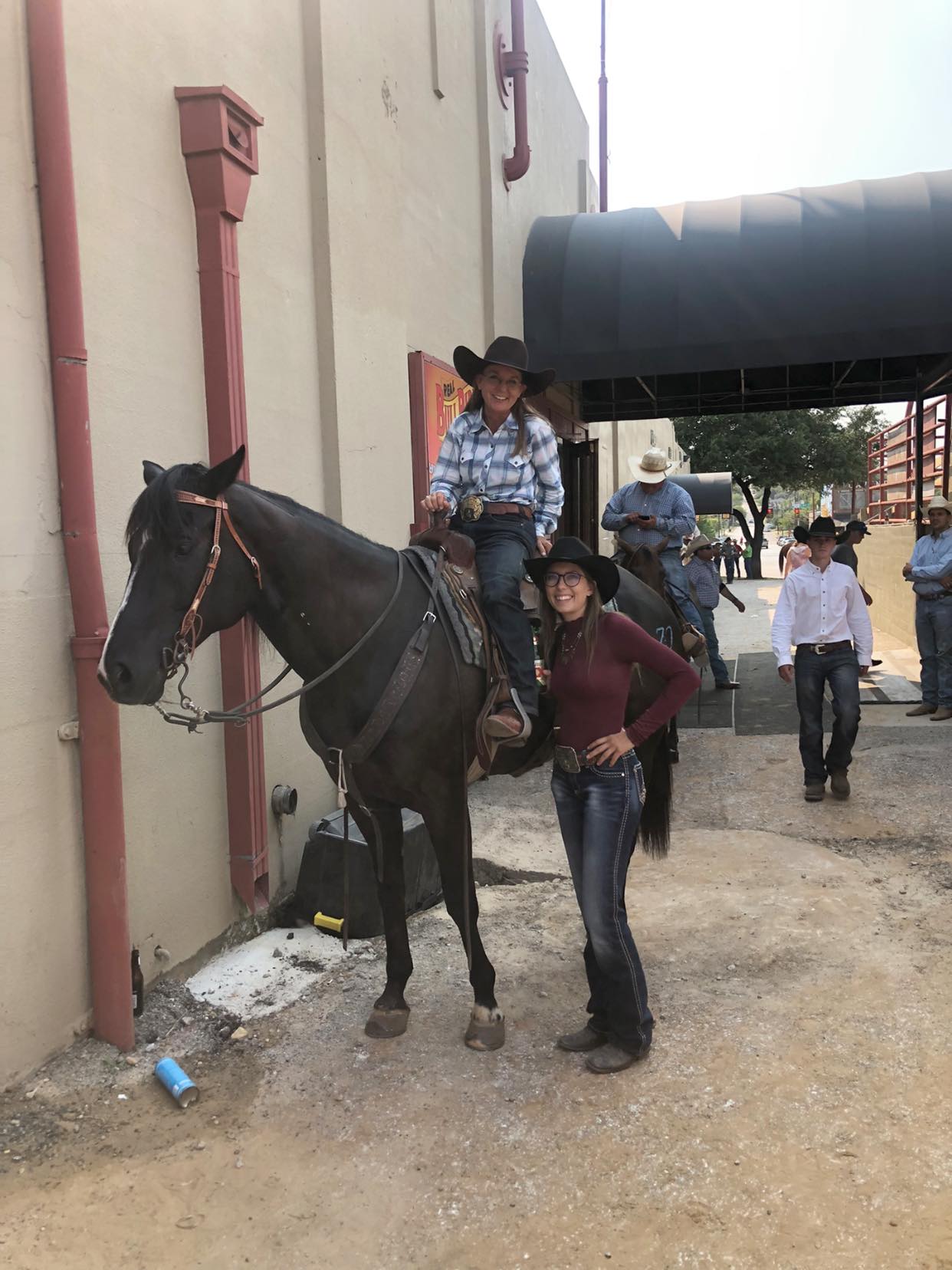 This week, I have been unwinding from all that, and waiting for the check!

Next week, I will get some new horses in for training and for the blog, you can look forward to reading a little bit about ICSI–Intracytoplasmic sperm injection!

4 Responses to The Sale!