I rode H up to the little catchment on our 30 acres to check on the spadefoot tadpoles, and to my horror, found them in a concentrated pile in a bit of slimy mud.  A few were still moving.

Fortunately, I am not in the movie, My Octopus Teacher, and I felt just fine interfering in the processes of nature, so I loped H home, got a bucket of water into my car and drove back up (slowly so all the water did not slosh out all over–it is a fairly rough dirt road).

Even though that only took about 20 minutes, by the time I got back, the whole tadpole pile was quite still and the top layer was looking dried and a bit crispy.  I thought I was too late.

I stood in the mud in my boots and spurs, feeling so disappointed that I had been just a few minutes too late.  But then I crouched down and poked tentatively at the pile with a finger.  At first nothing happened, but then one moved!!

I began to scoop the slimy muddy mess of semi-conscious, drying out tadpoles into my bucket. Some began to swim! 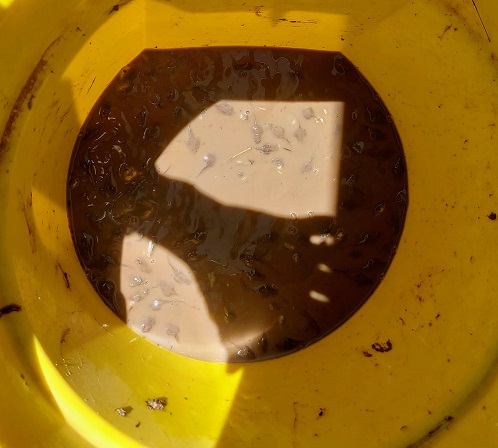 So, I scooped in the entire pile. About 75% began to swim about!

At this point I realized that my boots and hands were covered with mucky mud that reeked of dead and half-dead tadpole slime and fully dead worms.  I rinsed my hands in the bucket(!) which obviously did not produced the height of cleanliness, and wiped my feet in the grass before getting in my car to drive back down the rutted road. The smell was really penetrating. It took about five washings and vigorous work with a nail brush to get the lovely aroma off my hands. I am surprised I was not swarmed with flies in the meantime.  It was like being a human stink trap.

I poured the (odiferous) bucket contents into a 570 gallon stock tank that collects rain water and sits in a shady spot behind the hay barn.  Horses do not drink out of this one.

The tadpoles seemed ecstatic, if such a thing can be said of tadpoles.  They probably could hardly believe they had come from certain death in a slimy mud pit to 570 gallons of watery space! They were really active and swam up to the surface and then shot back down out of sight, and then came back up. Repeat! They cruised along the sides of the tank, apparently sampling the algae.  It was a lot of fun to watch them! 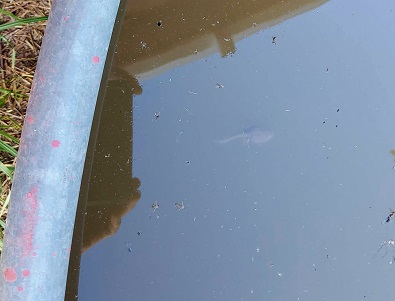 Many have hind legs.

The next morning, there was one new casualty floating at the surface, and the over all activity level was less frenzied, but I spotted quite few cruising for algae.

Of course, we do have some bull snakes in the barn and ravens that hang around.  Both may try to snack on the tads.

They do eventually have to leave the water and assume a terrestrial existence (for a very short amount of time–while it is still warm and damp), and then, since these are spadefoots, they dig into the earth and go dormant.  Apparently they can bury five to 10 feet, can stay buried for five to 10 YEARS, and they can live into their teens!

So, now I think I put my rescued froglets into the wrong tank.  I can build a frog ladder so they can get out of the current tank and bury, but then if it ever rains again and they want to come out and mate, how would they even be able to get into the big tank to find water?!

I may move some to the ground level (plastic) pond in the front of the house.  Then I can flood around that pond so the little frog-toads could bury there.  Then, if they ever came out again, they could breed in that front yard pond, maybe.

The two big rains we had this year silted in the holding pool, ran over the catchment berm, and flooded a dirt road on the 30 acres. So I am going to restore the catchment this fall when it dries out.  Then, hopefully next year, we will get some good rains, the road will be protected and we will have a nice little toad habitat.   And if no spadefooters come out next year, hopefully sometime in the next 10 years.

Of course, in the meantime I am going to worry that the catchment improvement will result in digging up some of the buried dormant frogs…

Here's the skinny: I have a thing for horses. They make sense to me. I have a small horse training business (it's a "boutique" training business, not because it's super fancy, but because the horses get a lot of personal attention). I also go by Dr. Wilber, and teach biology full-time at a Central New Mexico Community college.
View all posts by BlogPatty →
This entry was posted in The Write Horse and tagged New Mexico, The Write Horse. Bookmark the permalink.