Green Chile Show and then a LOT of rain

Maddie and Leo decided to go to a show!  They did the senior 4H events at the Green Chile Classic sponsored by the NM Paint Horse Club.  They showed in every event from ranch to western to English! They had such a solid show that they ended up reserve champs under both judges and won two nice saddle blankets! 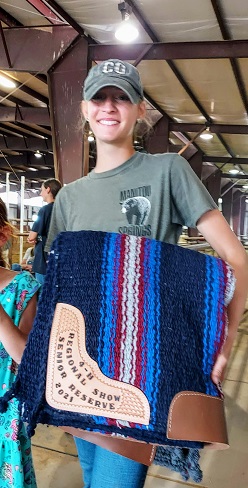 Maddie and her loot! Well earned!!

I am super proud of Maddie and all the time she put in with Leo.  Leo lives at my house and I work with Maddie occasionally (and I did help her at the show) but the vast majority of what she accomplished she has done riding by herself.  Way to go Maddie!!

There were dark clouds and the threat of rain at the show, but we did not get truly hammered until Tuesday afternoon when it rained 1.5 inches in about 30 minutes!  Rain like that runs off in a flash (flood) and it was pretty impressive to see.

We used to have water-tank-filling rains once or twice a summer (but have not had a decent monsoon season in many years) so we do have some landscape features to help direct run off from our roof and the road, away from the house.  They still worked!

Our front yard had two creeks! Muddy from the road, clear from the roof! 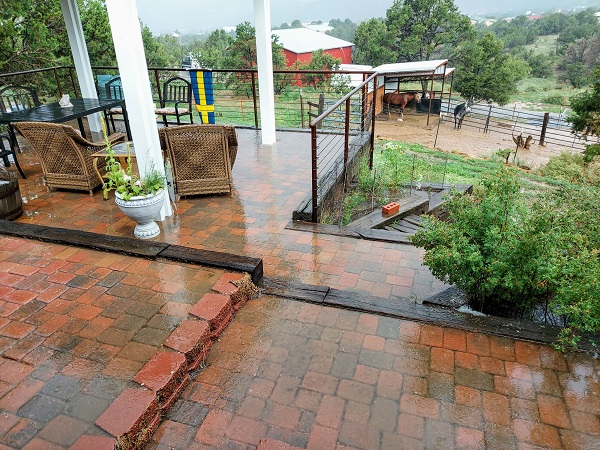 Our back patio was flooded. We have channels cut into the railroad ties so water runs off instead of into the basement…Learned that the hard way.

After the deluge, I went out to inspect the barn area.  Joey decided he would accompany me, every step of the way. The round pen was pretty darn flooded! 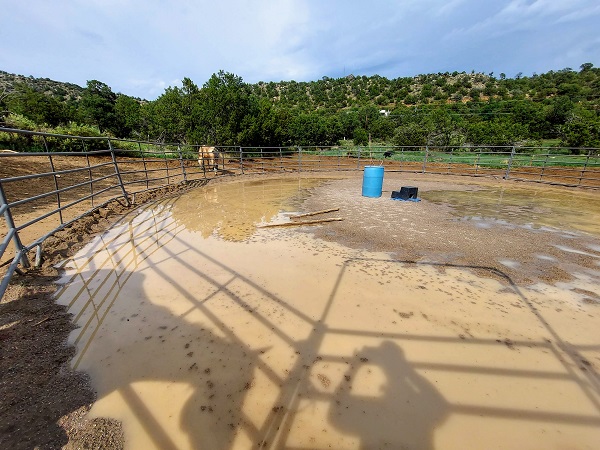 My shadow and Joey’s shadow, shadowing me.

I went in.  Joey followed. We had not worked on water crossing, ever, but I where I went, he went! 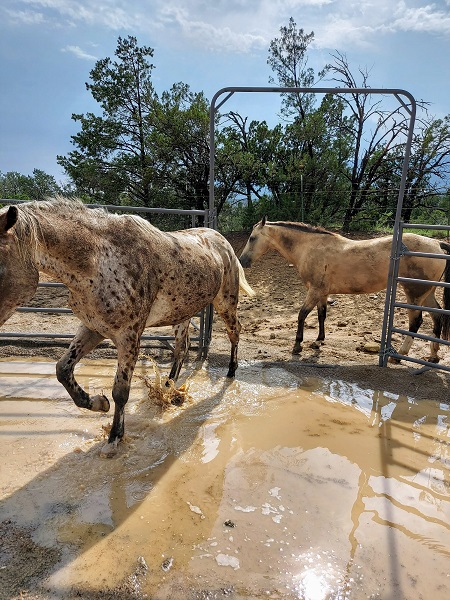 Joey followed me right in. Then came LT. Then Andretti. It was quite the parade!

Joey and Andretti making sure the barrel, tarp and steps survived. 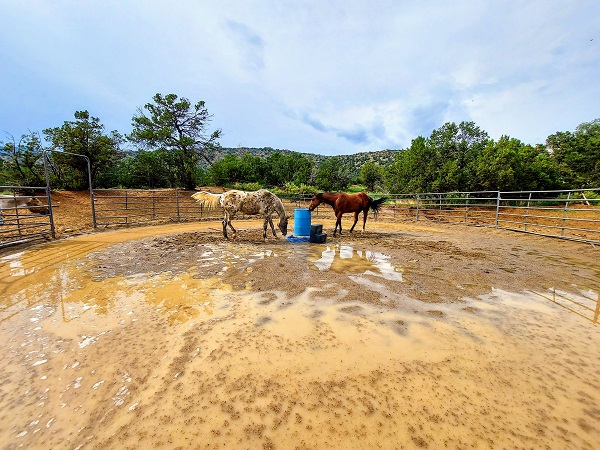 Joey: I think it looks good here, dude. Andretti: 10-4. nothing missing. but man the flies are bad!

Lucy does not love water.  She will cross it when under saddle, but she makes sure I know that she’d rather not.  One time when she was packing, we had one last stream to cross. I went for the water crossing, not the bridge, in case anyone wanted a drink, since I am nice like that.  Lucy pulled back and free and marched herself across the bridge, thank you very much. 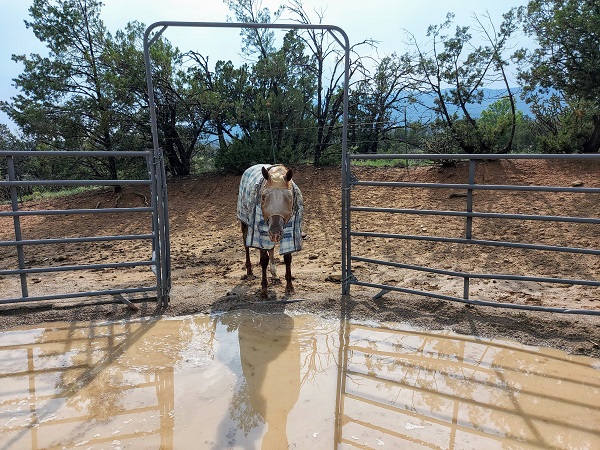 Lucy: almost everyone is in there, but look at all that water! 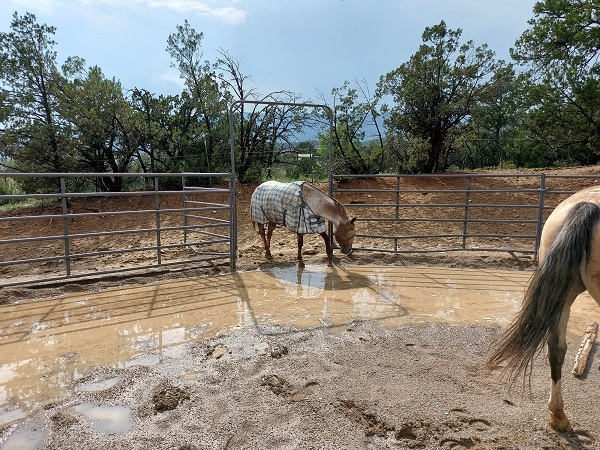 Lucy: i can do it! But that is as far as she got. She stepped back out. And in. And out. 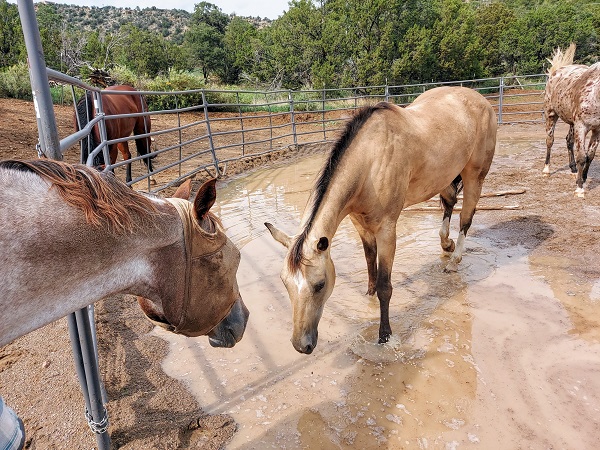 Lucy: oh good, they are coming out, so i don’t have to go in!

In the mean time, I cut two channels to drain the round pen. 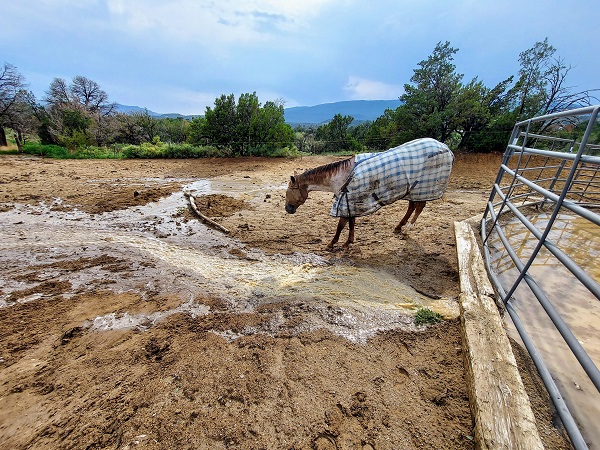 Oh no! Lucy fears she is trapped by the rushing water! 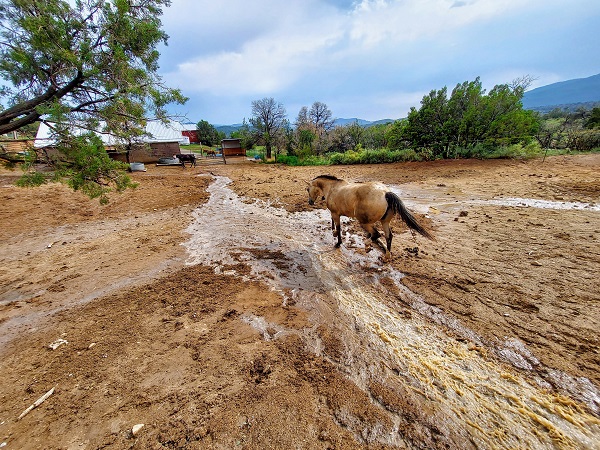 LT does not mind water at all and is heading out!

The water fell out of the sky like it was being ejected from some celestial set of fire hoses.  So much came, so fast, that it had no choice but to rush away over the land .  There was flash flooding for sure, but remarkably little mud was left in the aftermath.  The water took away a lot of loose soil and it was moving so rapidly there was no time to sink in.

Up on the 30 acres, within an hour of the rain, where a retention dam had backed up some water, the spadefoot toads were out and singing. They can lay eggs in two days.  It only takes 14 days from egg to full on toad!  I am afraid our “pond” will not stay a pond for 14 days, though, so fingers crossed for some more rain.

Fun times on the farm!