There is no coherent theme for this week, but a lot happened!

Penny did goat tying (with no prior practice, ever) with Heidi and they placed! Later they did turn back work for the ropers. They had some great turns, Heidi reports!

Joey came back, and I am getting him in shape for a trip he is taking to Wyoming!  On Wednesday, I took him over to Heidi’s and rode in the newly greening up pasture.   We have not seen green out there for about a year and a half.  Last summer the measly amount of rain we had mostly skipped them and the pasture stayed a crispy brown.

Joey was so overwhelmed by the short green stuff that he spooked at the lone bush-sized cholla!  I only laughed at him a little.  Goofball. 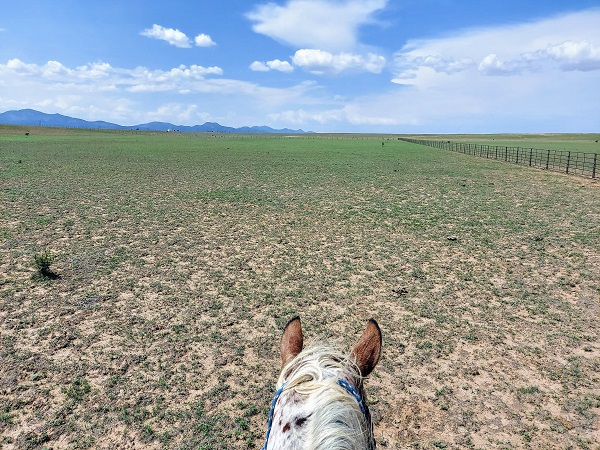 Lucy and I worked cows (we are really having fun!) with Heidi and Penny this same day.

Later, back at home, LT got fitted for her Thursday packing job. I bought this sawbuck pack saddle from Shelley and Lloyd quite a while ago but this is the first time I have used it. 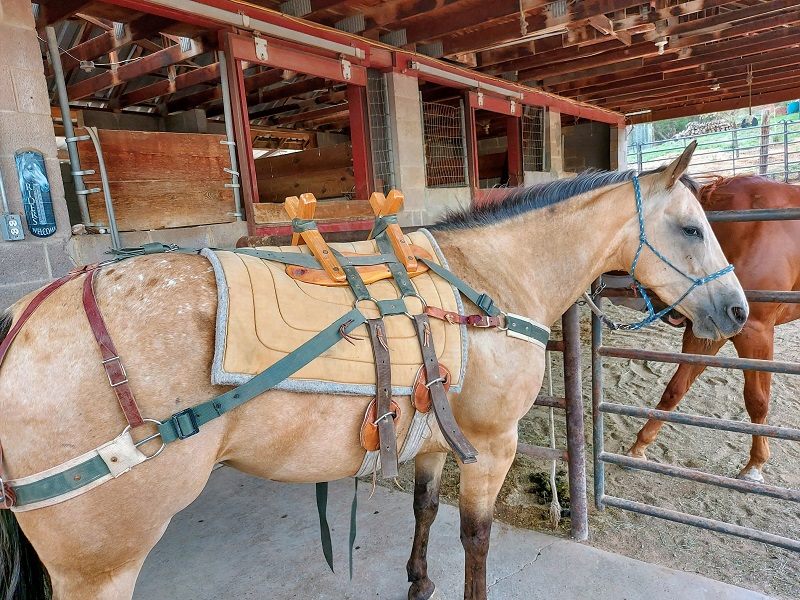 Thursday, I was planning to use Lucy as my lead horse for my little string of two (Cometa and LT) as we packed gear up Windsor Trail to Stewart Lake for a Volunteers for the Outdoors trail crew.

Then, in the wee hours, the rain started pouring down…BUT! After dumping almost half an inch, it stopped just in time for me to load up and drive 100 miles to our trail head, where it was clear!  Whoop!

Lucy was not originally slated for this trip because she is wearing slippery slider shoes (for her cow horse events in the show ring), but we needed two of my oh so versatile sweet things to pack, so I wrapped her feet in vet wrap, slapped on the old Boa Boots (one of which has a broken tightening mechanism) and duck taped the heck out of them. They stayed on! 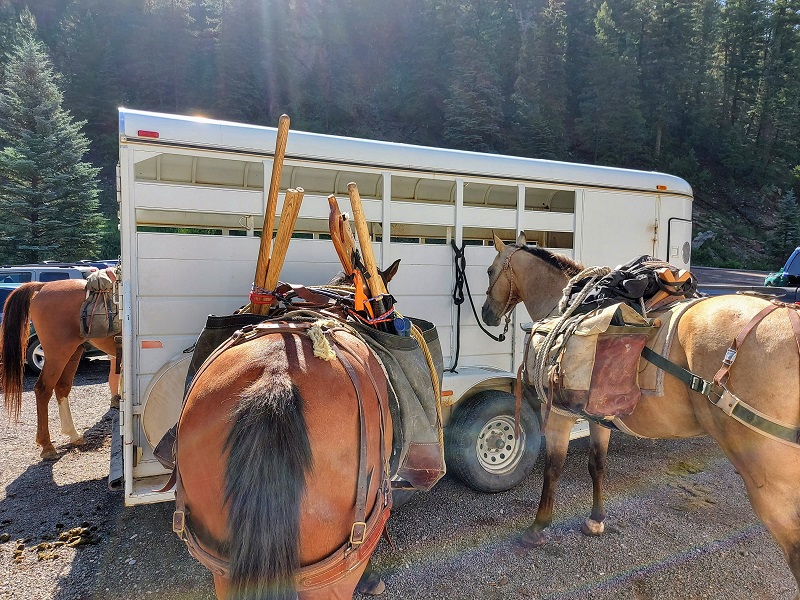 My pack crew, packed. Cometa with tools and LT with gear.

I gave LT and Lucy some Aloe Gut Gel before we hauled out, and I swear that stuff really helps LT, the Nervous Nelly, in particular.  It is not a calming agent, but it is supposed to soothe the gut (uh hence the name…) Anyway, LT did not flinch at all at the rope when I was lash cinching her load with my classic box hitch, and while she did have two “moments” on the trail where she sort of body checked Cometa after being insulted once by a log and once by a tree, she recovered within seconds. I hardly even knew the two pack horses were there, they were so easy! 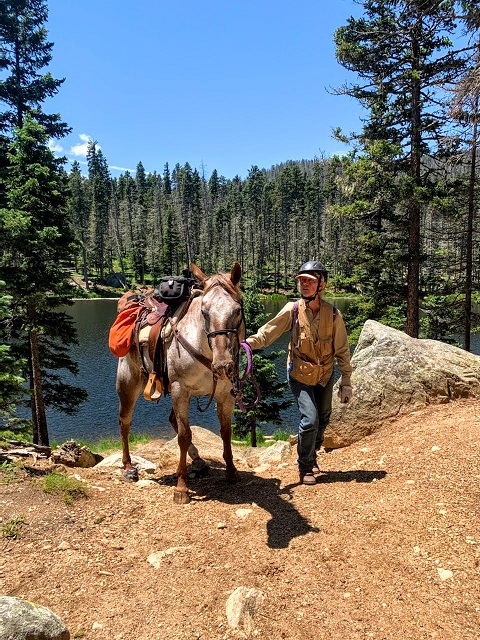 Me and Lucy at Stewart Lake. Photo by Patty S. You can sort of see the Boa Boots on her back feet! 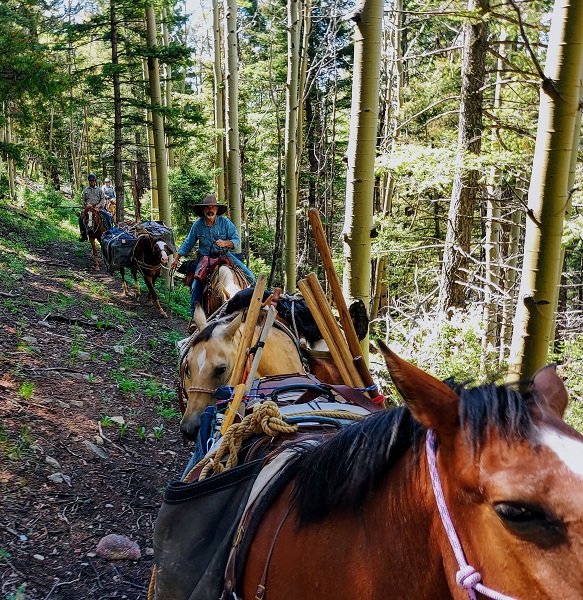 The String of Two: Cometa followed by LT. Peter is next, ponying Longshot, then outriders Bill and Patty S. Mary Ann, our other outrider was ahead of me so is not pictured.

The total ride was about 12.5 miles (according to Equilab), and despite the forecast, the rain held off until we were driving home.  I think we drove about 200 yards (of the 100 mile return drive) before the first rain drop hit us!

Lucy is slated to show on Saturday, as well.

Eva came on the 8th, and due to the solid foundation her owner Danielle had put on her, I was able to get on her almost right away.  The first day we “rode” we actually spend a lot of time with me just sitting there listening to my book on tape until Eva figured out that she could move her feet with a person on her back.  Relaxing, actually.

Eva is not sure she enjoys all the spectators! 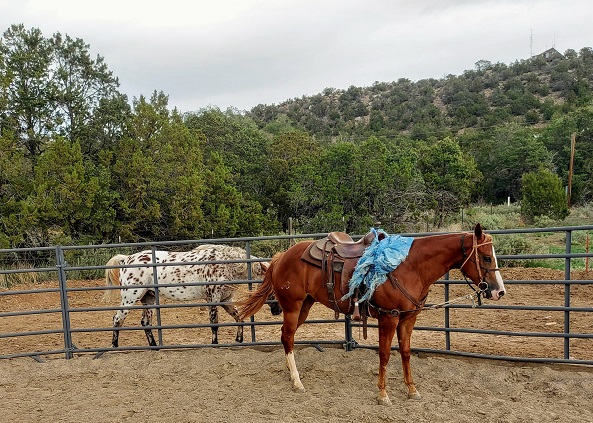 Eva with help from Joey. 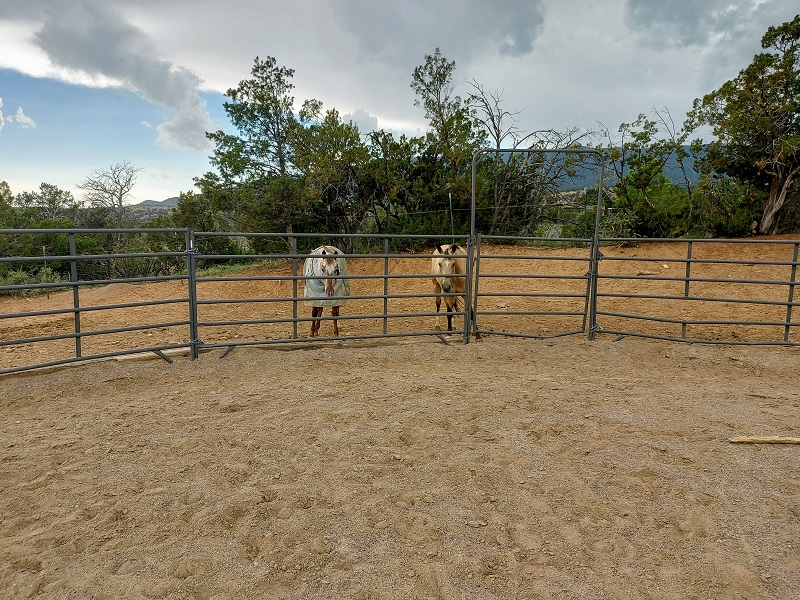 The other help on the other side of the pen. Lt and Lucy ( sheet). Only Andretti is missing from this group. I think he was back down by the barn foraging for scraps!

Beauty and Andretti are both doing well at about 50 rides. Walk, trot, lope and can ride out on the trail, where they can both lead or follow.  Beauty is only two, and it took a while, but one day, all of a sudden, something clicked and she was ready to work! That was cool because it really was a very distinct and rapid change! 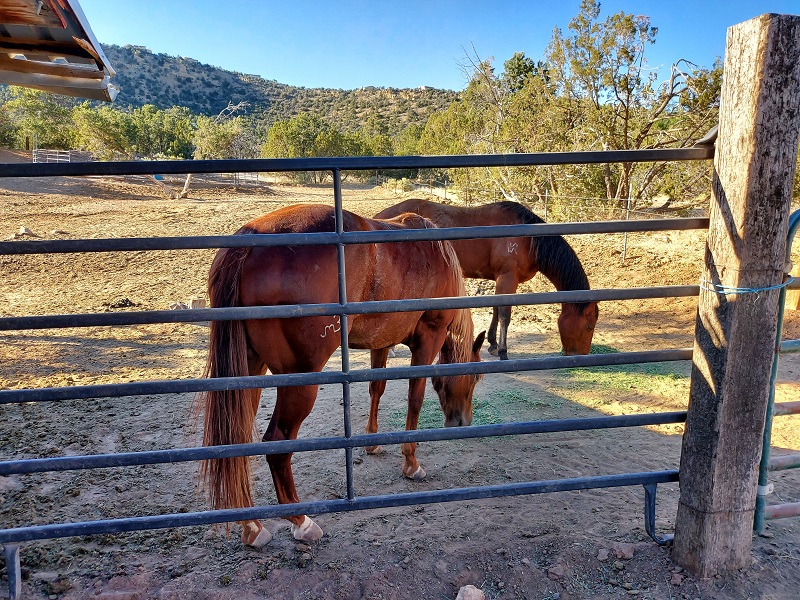 Andretti is growing like a weed so is a bit on the “parts?  is that my part?”, side, but he is a dear boy with untapped power under the hood that he is just learning how to control.  He can walk around in sort of a shuffle-footed galumph, and then with a little support, he can get on his hind end and get started on a spin.  Also, this guy could be a very big stopper!

When his brain catches up to his growth spurt so that it knows where those parts are in space, he is going to be amazing (and did I mention he is just nice to be around?).

It is busy around here! I am not looking forward to the shorter days of Fall! Just saying!

Here's the skinny: I have a thing for horses. They make sense to me. I have a small horse training business (it's a "boutique" training business, not because it's super fancy, but because the horses get a lot of personal attention). I also go by Dr. Wilber, and teach biology full-time at a Central New Mexico Community college.
View all posts by BlogPatty →
This entry was posted in The Write Horse and tagged adventures, horses, New Mexico, riding, The Write Horse. Bookmark the permalink.

2 Responses to No Coherent Theme