The Quest for the Lost Keys 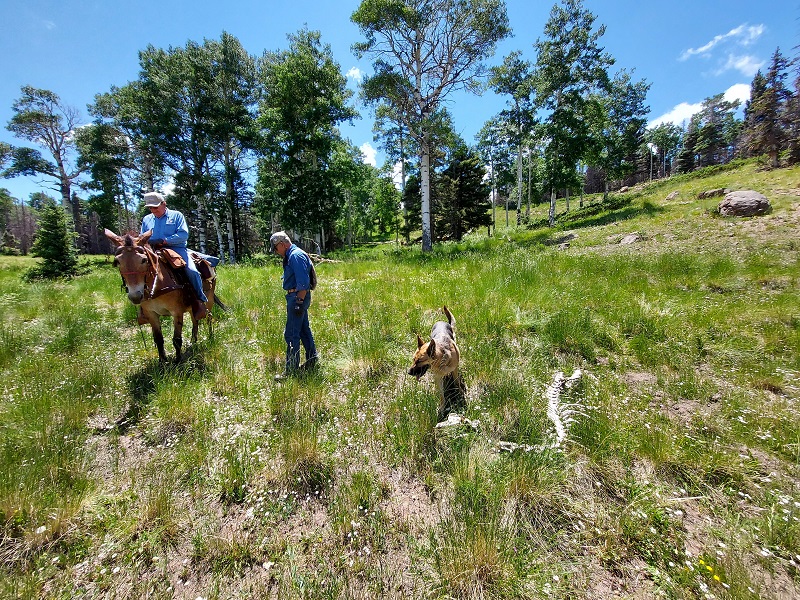 Looking for the lost keys. Steve on Maddie mule, Richard and Cole (dog) looking.  Well, Richard is looking.  Cole is pretending to look!

We found the cow elk skeleton, but alas, no keys.

That was a short story.

There are 25+ miles of good dirt/ gravel road and two miles of steep and rocky road to this camping area but we finally mastered four wheel drive low and first gear for the last part.  We actually pulled the trailer down the steep part instead of the trailer pushing us and having to brake all the time.  And almost no breaking! Almost.

One of our tail lights did pop off (duck taped it back on), and our water tank spigot wiggled loose (40 gallons in the tack room and living space, along with olive oil that also spilled in the boot box…hey we got our floors very clean and oiled…) We had brought water in jugs, too, and Richard hauled in a water cube, so we were ok.

Later in the trip, Richard did a couple of modifications to our water tank because he never goes anywhere without his work truck and can’t resist finding ways to solve problems! We have a couple other things to alter, but maybe we will get it right next try…

But check out the scenery! 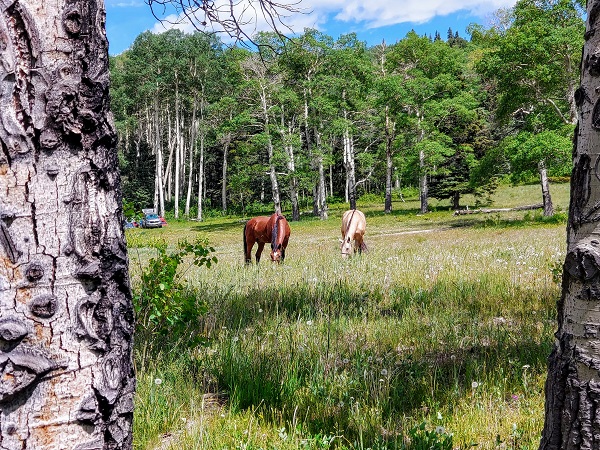 Grazing for the horses (Cometa, bay; LT, buckskin) at campsite. Truthfully, their grazing time was small because every time we hobbled them up, they’d eat for two minutes and then come over to bug the high-lined horses, or get a drink, or something. 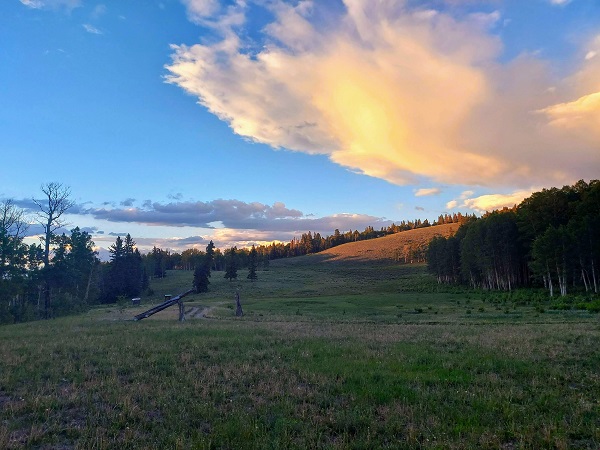 Plenty of space in camp! (No amenities, though. We brought our own–even if we lost some of it on the way in.) Our Day 3 ride ended coming down the sunlit slope (during the day, though.) 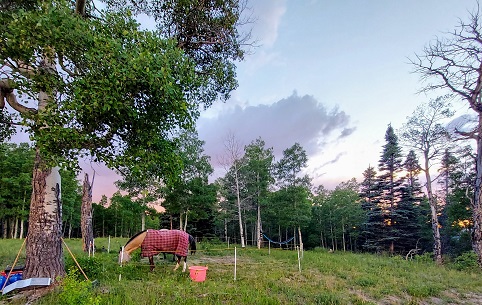 LT and high-lines have a history of not getting along, so we tried the electric fence. (We have electric fencing at home.) That worked well. I blanketed the first night because there were lots of mosquitos, and the second and third nights because of the chance of cold rain…and some mosquitos. 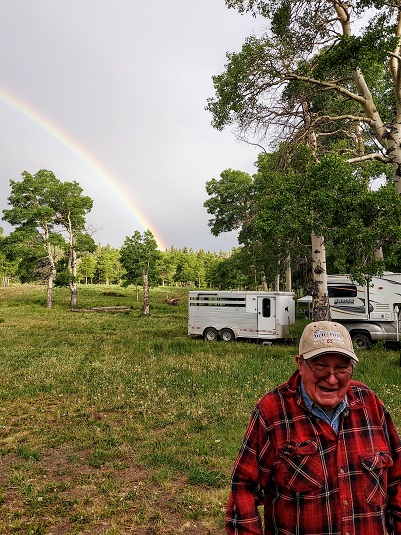 Steve Randall and a rainbow (a double actually). My camera did not do the rainbow justice at all. It had about 10 bands, it seemed like! 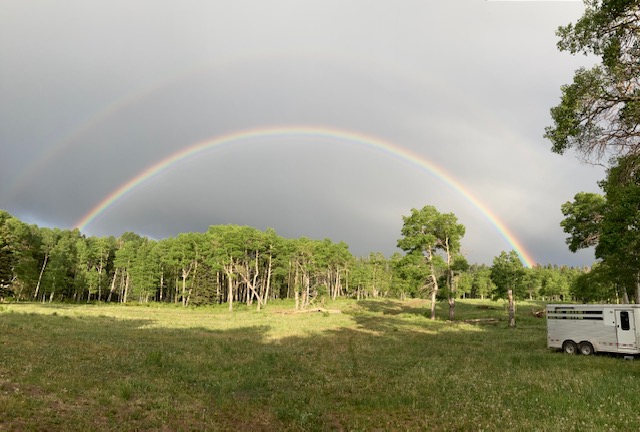 Steve’s picture is better and you can really see that the rainbow was a double!

As for riding, we did a 4.2 mile trek up the middle (Beaver) creek a bit on Day 1.  On Day 2, we did the 10 mile key hunt loop that took us down into the Basin, up out and over toward our normal hunt camp then toward Colorado and the big meadows with aspen and spruce.  On the way back to camp, we dropped down at the back of the Basin and as we rode along Cruces Creek in the Basin bottom, we were treated to a large herd of elk.  We got to hear just a bit of the cows singing to the calves.

Day 3 we did a five mile loop up the road and then north toward a big canyon and back to camp (exactly were we had hoped to come out!)  We kind of free styled our route, but between the open country, the road, the canyon, and the Basin we had plenty of boundaries to keep us from getting misplaced. We saw another big elk herd! 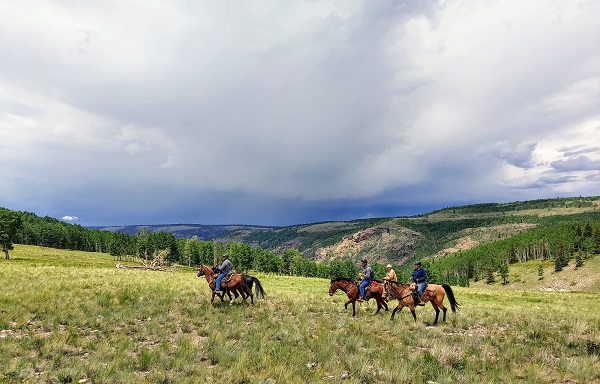 Then, Jim and I did a (gasp) HIKE of a little over four miles. (I was hoping it was six, but no…) We went towards the Basin but then veered westish down Beaver Creek to a narrows with some cool rock formations.  We had hoped to come back to camp via a trail we had seen last year.  The trail led to a great overlook of the canyon and down towards Los Pinos camping area.  The other branch of the trail was going the direction we needed to go, but headed into dark timber.  Since it was around 5:30 pm, and we did not have a map, we decided to save that trek for next year and back-tracked to camp. I am happy to say that me and my hiking poles did an ok job, even on the slog up out of the Basin to camp. 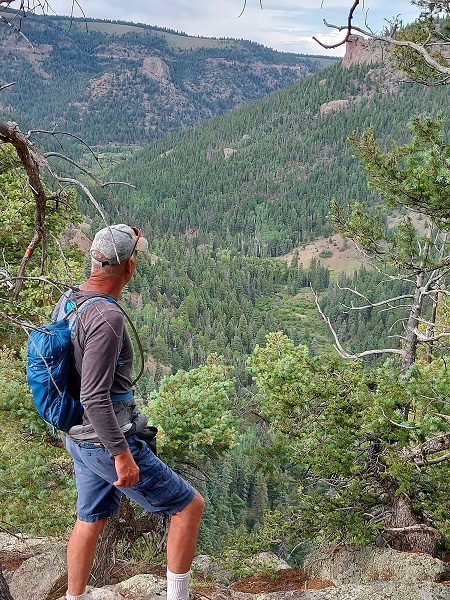 Nice view into the Beaver Creek drainage, heading towards Los Pinos. You can see the line on the far hill that is the Cumbres & Toltec narrow gauge railroad that runs from Chama, NM to Antonito, CO. We could hear the whistle a few times each day!

The last evening it rained and it kept raining in the morning, so we got pretty much packed up to go home and then took a little 45 minute ride (in the rain).  We went down to an old road that cuts off the trail from the camp to the Basin.  The road goes by a falling down cabin within a few hundred yards and keeps going…so we did, too.  Turns out it was the actual old road that used to lead into the Basin before it was a wilderness, and it went in a nice loop, right back to camp!

Here is a map showing generally where we went. And you can see we were up near 10,000 feet. 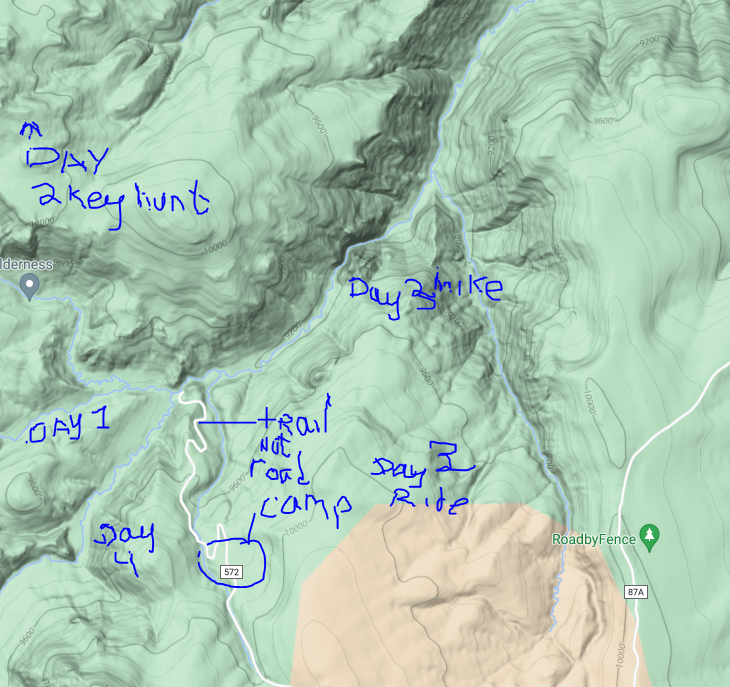 So, of course it was a fine time!

Next up: Carlsbad Caverns with some family and no horses!

5 Responses to The Quest for the Lost Keys