Last Friday (6/11), a lightning strike started a fire in the Pecos Wilderness, and Saturday, were were planning to pack in supplies for a trail crew…

Fortunately, the fire did not grow fast (Rincon Fire: still only 500 acres 6/17 and is mainly an understory fire, although 139 personnel are still listed as deployed on it.).  Also it is/was situated about eight miles east of the work party, and would be expected to move farther east rather than west if it were to grow.  So, we got to go in! 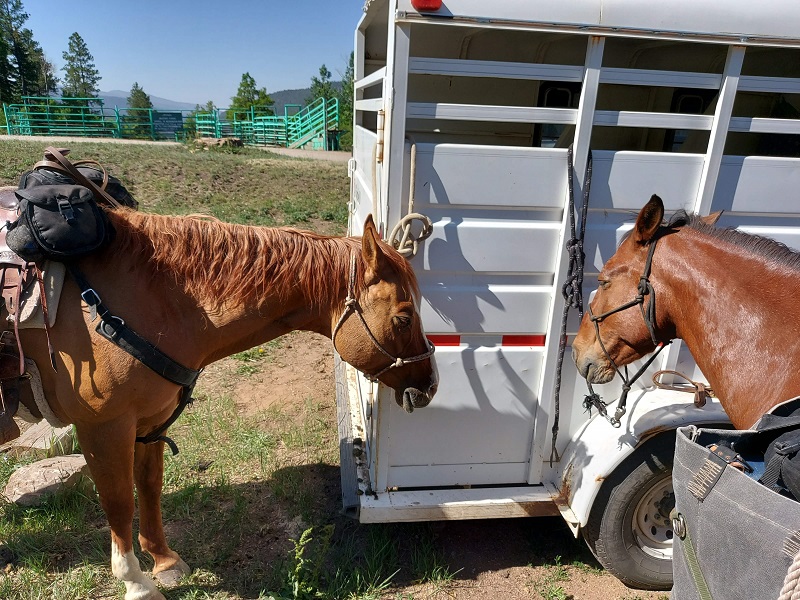 Requisite “horses are the trailer” shot. Penny (left) and Cometa (right) are old hands at this. Sleep until it’s time to move out! Cometa hauled stuff and Penny hauled me.

It is always a fun day when you get to ride in the Pecos, and it is rewarding to get to pack! I might have only one hitch in my repertoire but I can tie a mean Box Hitch, and that is what I used to secure Cometa’s load.

We rode out of Jack’s Creek campground and the trail makes a pretty steady climb for about two-ish miles.  At the top of the climb there is a good photo op. 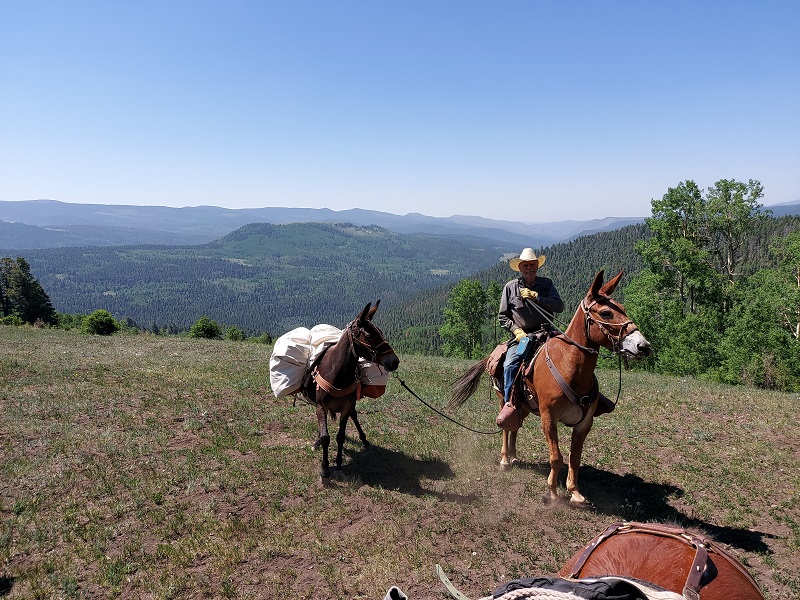 Photo op! Gary and his mules (and Cometa’s sweaty butt).

From there we went left on Jack’s Creek trail. The trail crew we were helping had cleared most of down logs to the drop site, but as we entered the old Jaroso fire scar (2013 fire) there were still some logs across the trail.  It is kind of fun to pick your way around a blockage, and the fire scar does have its own kind of beauty. 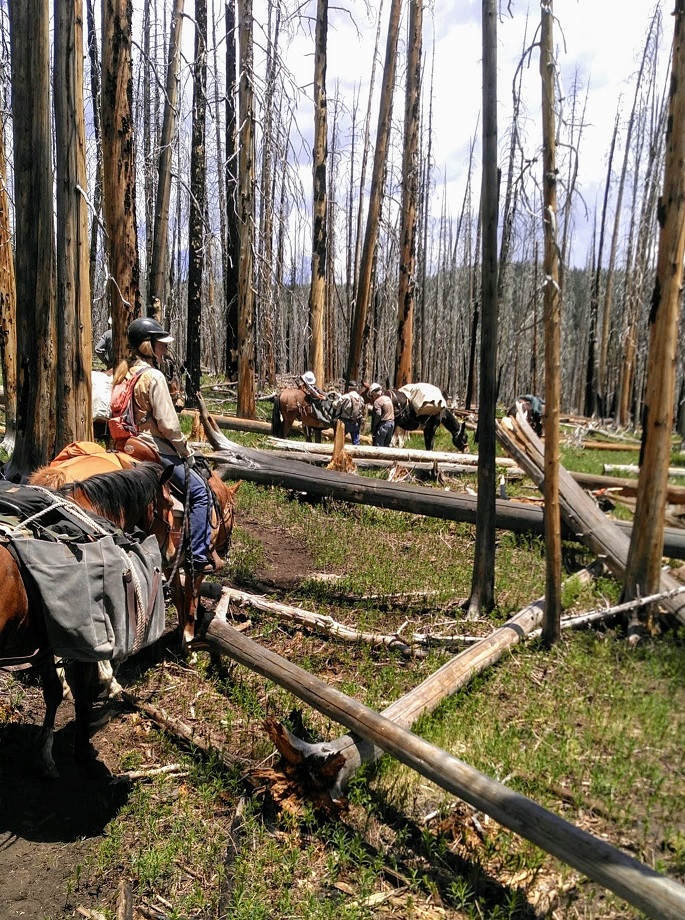 Me, Penny and Cometa, in the fire scar, This is were we caught up with the working trail crew. Photo by Peter Harris. 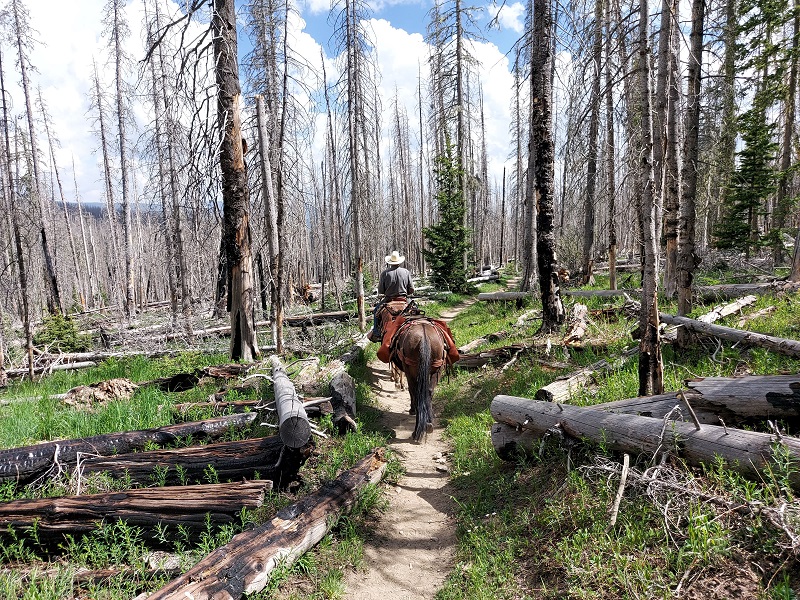 Gary, on the way out, in the fire scar.

As we left the burned area and got back in the trees, we met the crew leader, Kevin, and he showed us an old two track road that led to a small meadow near a clear pond with running water.  A perfect, out of the way, camp spot for the crew for the week of trail work.

We unloaded, helped set up the wall tent, and ate lunch there. 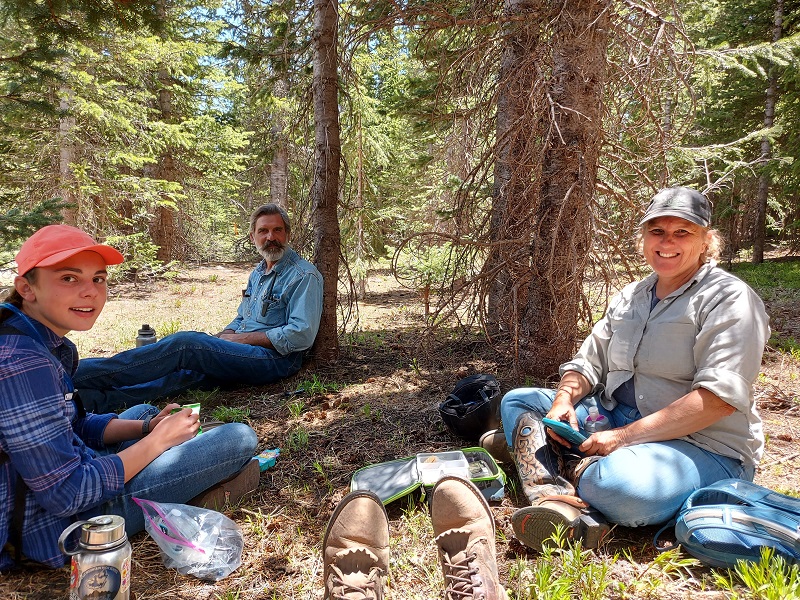 We decided to continue on the old two track in hopes that it was a secret path to Baldy Lake, but it seemed to want to head back south, and keep climbing up, so we turned around and hit the actual trail to the lake.  Of course now I want to go back and try to figure out where that old road goes!  It might require an over night stay, though, because the camp spot was about 7 miles in, and who knows where that road wanders…but it was easy to follow, as far as we went…

That got me wondering about how old that road might be…

“The Pecos/Las Vegas Ranger District was known as the Pecos River Forest Reserve when it was founded in 1892. It was combined with the Jemez Forest Reserve to form the Santa Fe National Forest in 1915.” The Pecos Wilderness area was established in 1980.
I also did a quick search for a map of old roads in the area, but was unsuccessful.  A project for another day, I guess.
Baldy Lake was not far, and since we had come all that way…! 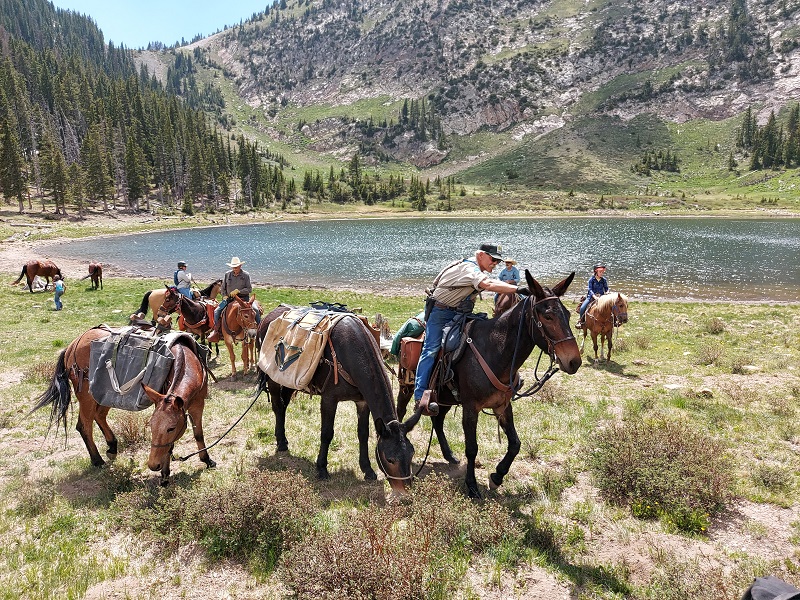 Everyone in our crew and one extra in this pic!  Richard, front and center. Then L to R, random camp kid and two horses, Patty S, Gary, Peter, and Ashytn. The lake is a bit low. The trail crew will be working on the trail that goes up the low spot at the back of the lake and over to Horse Thief Meadow. They will be spending a week!

I won’t be able to help with the pack out because I will be in Colorado at an Appaloosa horse show with Lucy  (horse) and a good number of NM friends.  Lucy gets to ride with Nancy (a person) and Gunner (a horse), because my truck is getting a a new drive train…

Then the weekend after that, more camping!  Not sure which horses will go, but I will let you know!

Here's the skinny: I have a thing for horses. They make sense to me. I have a small horse training business (it's a "boutique" training business, not because it's super fancy, but because the horses get a lot of personal attention). I also go by Dr. Wilber, and teach biology full-time at a Central New Mexico Community college.
View all posts by BlogPatty →
This entry was posted in The Write Horse and tagged adventures, New Mexico, riding, The Write Horse. Bookmark the permalink.