Last weekend was the NM Buckskin Horse Association’s Ranch Show.  As usual, it was fun! Also a treat for me since all three of my mares (LT, Penny and Lucy) got to go AND I unexpectedly got to show Nancy’s gelding Gunner!

Heidi the girl (age 11) and Penny the horse (age 14) had to show Novice Amateur as there was not a youth category.  They ended up reserve champions!  In boxing, Heidi had good square stops and kept Penny turning over her hocks.  And when she needed to, she got across the pen quickly and stopped her cow before it took off down the fence.  She did NOT lose her cow! 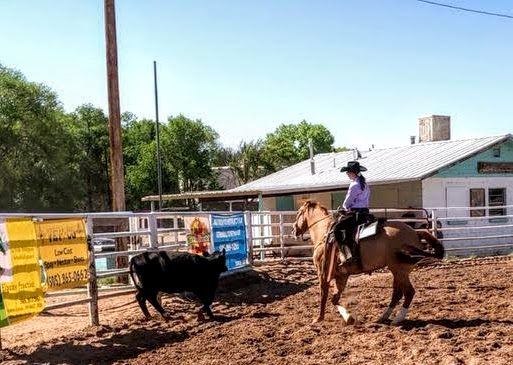 In trail, Heidi missed a lead on a counter canter but in a three stride space, noticed, fixed it with a flying lead change, and then correctly loped the logs on the counter canter. That was a cool recovery!

Jordyn was home from college for a week, so we basically pulled LT out of the pen, dusted her off for the week and Jordyn showed.  It was Jordyn’s first ever boxing class.  They went in the arena and LT could not stand the idea of waiting for the cow to come out of the gate so began prancing about and semi-rearing.  (That brought back memories and made me appreciate Lucy who would probably take a nap if she had to wait very long for the gate to open.)  On their second go, Jordyn started farther out, called for her cow really early, then kept LT moving forward, which gave all that energy LT keeps on tap, somewhere to go–forward.

They also had a really nice reining pattern.  LT can be a beautiful, flowing mover and has a super nice reining spin…and we got to see some of that in her winning go!

They ended up reserve Amateur!

Nancy came to do the non-cow events and when she arrived, she said, “Do you want to show Gunner in the open?”

“Why yes, yes I do!” I responded. I had never ridden him before, but turns out he and I got along quite well right away, and Gunner out scored Lucy in at least two and maybe three events!

The trail class was perhaps the most fun because it felt so smooth, and the judge was very complimentary!  (He won that one for sure!)

He ended up reserve open horse!

Nancy showed him the amateur classes and did her first ever reining pattern.  She also did well in her other classes and we did have some fun!!

I showed Lucy and Nichole (Heidi’s mom) took video for me. I also compared a couple things I liked with the way Gunner handled, so I have more things I want to keep working on with Lucy.

We did Working Cow Horse (since that is what was listed on the class list) but it turns out it was supposed to be Ranch Cow Work…  Reined cow horse is boxing, two fence turns and circling up with no time limit and Ranch Cow Work is boxing, drive to other end, box and drive back in 1.5 minutes…

The great part was that I got a do over so we got a second cow to work!

When the first cow went down the fence at speed, Lucy ran and then humped up a bit, which she has never done in practice but now has done twice in shows. I checked her back slightly and she sort of ignored me and this also let the cow get a little far away…so apparently I need to drive her forward instead…We got our two fence turns and our circling up was NOT the sweet thing it was in Arizona.

Cow number two did not run hard down the fence, which was too bad as I wanted to see how Lucy was going to handle that on try two, but we did a good job of controlling it and completing the box drive box drive pattern!

Lucy ended up High Point Open Horse and won a really cool prize made by Darrel Shough, which turned out to be really hard to photograph because of the mirror and the flash! 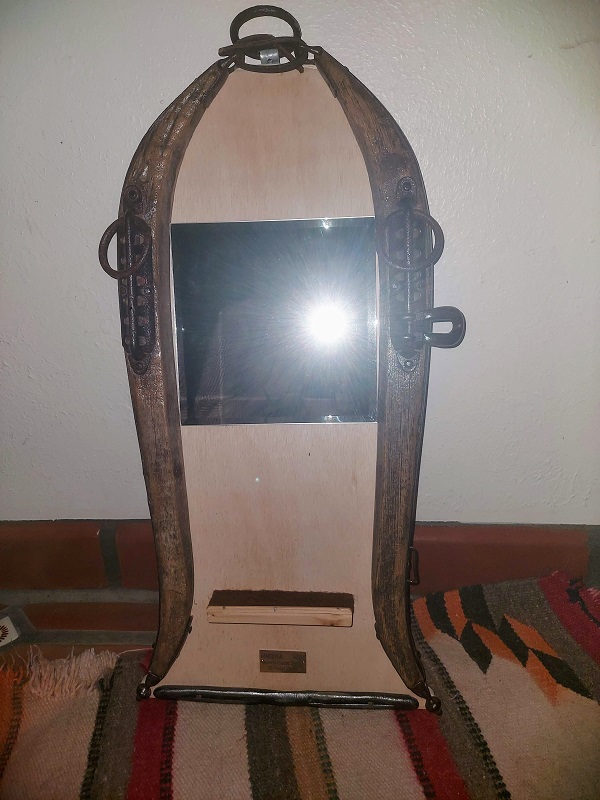 I am posting this early since I am taking LT camping Weds. to Friday.  Next week you can guess what the blog is likely to be about!

Please excuse any typos as I am short on editing time!

Here's the skinny: I have a thing for horses. They make sense to me. I have a small horse training business (it's a "boutique" training business, not because it's super fancy, but because the horses get a lot of personal attention). I also go by Dr. Wilber, and teach biology full-time at a Central New Mexico Community college.
View all posts by BlogPatty →
This entry was posted in The Write Horse and tagged happy sigh, horses, New Mexico, riding, The Write Horse. Bookmark the permalink.

3 Responses to Let’s go to a show!