Well, the family left last Saturday and Sunday, and the sheer volume of food the eight of us consumed was remarkable.  Feeding eight people instead of two required several extra shopping trips.

I am missing the jumble of 30 year old kids toys all over the house!  Yes, we have home-made wooden blocks, paper blocks, bowling, ancient matchbox cars, books and more that we had saved for just this occasion.

Here is one more picture from last week. 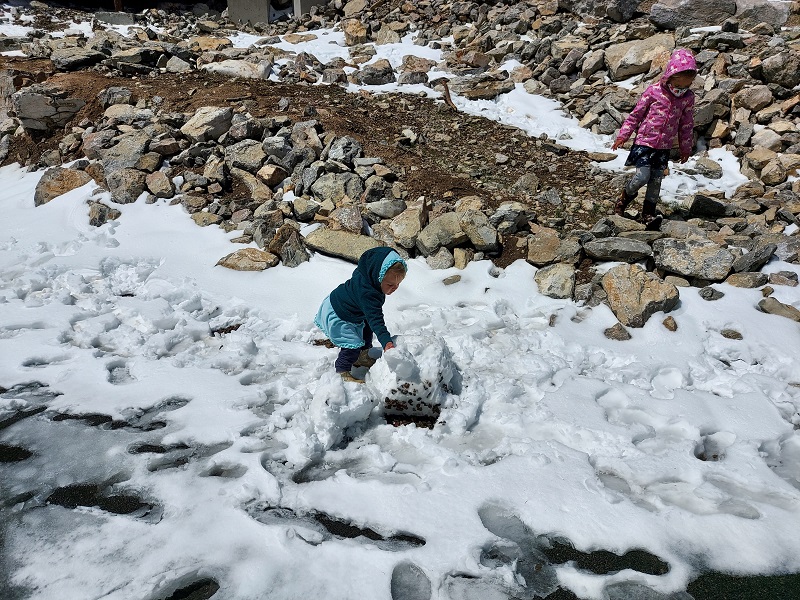 Last Thursday we rode the Sandia Tram to the top of the mountain and the wee Hawaiians got to see snow!

Normal around here is not typically boring, but I am still missing everyone!

Andretti, with 12 rides, is loping in the round pen with no pre-lunging, and has also been on a short trail ride by himself (well, I was there–I rode). I did hand walk him up and down the very steep part of the trail with the railroad tie steps, just to baby him a bit.  He was outstandingly settled.

Now that we are through the baby steps, we can begin to push it a little more.

Beauty got her first set of shoes right before she came, but went sore with them after a few days of work (I don’t think it was all that pawing..!).  They were just trimmed a little too short.

Bute relieved the discomfort and now two weeks in, as her feet are growing, she is feeling a lot better.  She has one “ride”, which means she has moved her feet forward and nothing else was really expected.  All I wanted was a ho hum, no drama day, and that is what I got.

I know it is ridiculous to say since I start colts, but I am not all that brave.  I don’t enjoy working through the antics of tense youngsters, so I try to go slow enough that we all feel relaxed. These two are proving to be willing pupils!

I had lessons with six or seven people, did some clipping of horses for some shows coming up this weekend, and had a blast with Lucy on the cow flag.  Her spins and stops are starting to come on, finally, too! I determined that she will never be asked for a big stop unless she is wearing boots, and she seems to agree with that plan.

For her spins, I spent months trying to improve her underlying technique, which I think helped, but I finally had to lay it on the line and insist on a much higher level of effort.  Earlier, asking for more effort just resulted in a mess.  This time, we are getting some spins that look a lot closer to what I want.

Jordyn is in town. She is riding LT and will show her in boxing this weekend (and the other ranch classes, too.) On Monday, LT was a bit unfocussed.  On Thursday, she was nailing the lope, trot, counter-canter trail obstacle we had set up and was working the flag nicely. Plus, she is shed out and her glowing gold summer coat is so pretty to see.  I think she has one copy of the pearl gene, which results in a super shiny coat.

Penny and Heidi are also gearing up to show in the boxing (and all the rest) this weekend, so we worked on “attacking” the flag, the counter canter obstacle, and rollbacks.  Not bad for kid that had not done this show ring stuff until about eight weeks ago. Jordyn, Heidi and I will be working live (sort of sour) cows Saturday.

Nancy and Gunner are going to do the non-cow events.

Deets worked on his transitions, is just starting flying lead changes and he and Christy are off to a different show than the rest of us, in Santa Fe.  His horsy brother, Lamont is staying the weekend with us.

So, definitely not dull, (but still missing the wee ones).