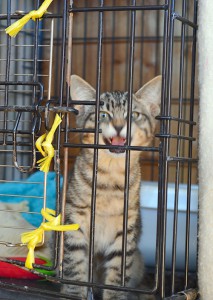 As soon as I saw Mr. McKittypants, I knew he would break my heart.

He came to us young–a born feral, behavior modification flunk-out—an unadoptable cat.  We needed a barn hunter and we’d already lost one feral who couldn’t adjust to her new location, so we had no intention of considering this one to be family.

One look was all it took.  Even while still in the crate, Mickey’s force of personality shone through.  Incredibly smart, incredibly expressive, and—it turned out—incredibly social.  Add in his food-driven nature and his age, and we had something to work with, as long as I did it fast.

So Mickey went to his big transition crate, and I went to work.

He learned no claws, wait for permission to eat presented food, come when called, go into a little kitty down to ask for food, “kill” and eat the deceased mice from the barn traps, and wait for permission to leave the crate.  Also, no cords, no going behind the computer, and let me touch your belly and feet and face.

Most of these things were necessary to make it easier to manage him, but all of them were also necessary for self-defense.  This cat, as it happens, is the most primal cat I’ve ever seen.  I fully understand why he was considered unadoptable!

So within a very short time I knew two things—I was going to love this cat to pieces, and he was never going to be an indoor-only cat.

Thus the high potential for a broken heart.  The coyotes are thick in this neck of the woods just for starters.

Inside, he snoozes on my office chair, demands cuddles during the evening, plays furiously with the dogs and especially the puppy (but never extrudes a claw), and inserts his personality into every nook and cranny. 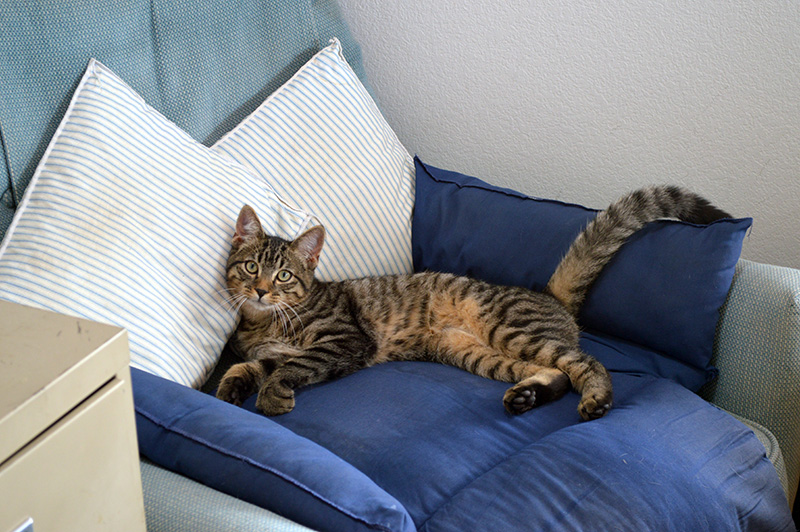 Outside, he lives to hunt.  Which is awesome, because I didn’t get a barn cat for the ambience.  Well, not just for the ambience.  The past couple of years have seen a ridiculously explosive varmint population around here—gophers, rabbits, mice, squirrels, pack rats, but not nearly enough predators of same (it’s been years since I saw a good bull snake).

Not to mention that in this area, varmints carry more than rabies (like that’s not enough).  They also carry hanta virus, tularemia, and the plague.  (Yes, that plague.)

When Mickey was seven months old, he used up his first life and nearly lost his leg in the process.  Best guess, he got caught in a tangle of sharp metal.  He spent days in Kitty ICU and came home with stitches, pain meds, and the dreaded Cone of Shame.  We covered the budget-shattering cost thanks to a fund-raiser and pondered if we could make him an indoor cat.

But of course he healed faster than expected and would have none of it.  NONE. OF. IT.

We did work out a détente of sorts—he eats inside, he usually overnights crated inside, he naps inside and he plays with the dogs inside. 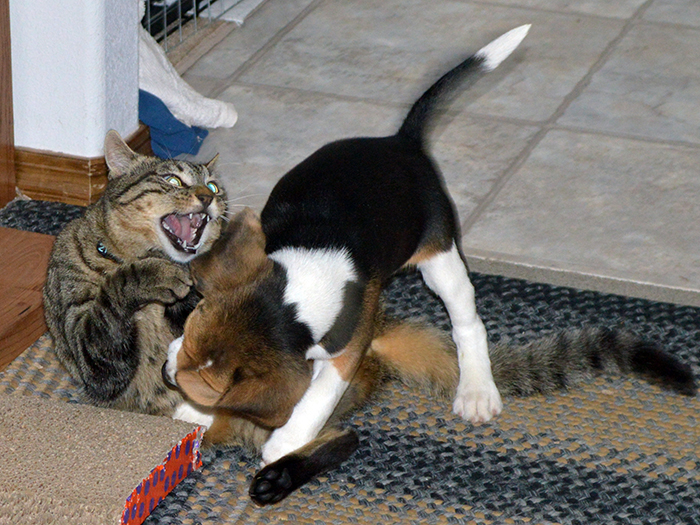 If we play by these rules, he cuddles and purrs and heaps affection on us, and he comes when called.

If we don’t, he shreds the world.

It’s a trade-off.  Letting him be what he is—the very thing he came here to be—while hoping he gains outdoor wisdom and seasoning fast enough to stay safe.

Mickey made it through winter with his silly-looking shaved back quarter, and things warmed up around here in mid-February.  Not permanently, but enough so the hunting got good again.  Oh, the glory!  Mr. McKittypants went to work with a vengeance.

And two weeks into March, Mickey was back in ICU, ensconced by himself behind a handwritten sign:

It was scary until they got that organ-cooking temperature down, and then he recovered quickly—although not before he left an indelible impression on the techs by proving he was just as primal as he’s ever been.

He did not want to be there, he explained.

But once he came home, he recovered very quickly, though he was supposed to stay inside for two weeks.

By then he was on an endless rampage and had acquired the skill of transporting across the house to whip through an open door at the very touch of a human hand on the door knob.  (Thank goodness for security screens.)

I called the vet’s office.  They remembered him.  Mickey was released to go outside.

By evening, we had our cuddle cat back again.  And now as we wait for the results of his cultures, we’re playing by his rules again–the only way we get that lovey-dovey boy.  Out when he wants out, in for his demanded cuddles, hopefully inside at night and crated but his choice.  Starting life #3.

So that’s our plague cat.  Unadoptable as a pet, barn cat for a reason.  Born feral, born awesome, born entirely unwilling to live in confinement no matter the risks outside.  I’d say we’ve made the decision to let him be himself, but it’s not our decision at all.

So we’ll just keep loving him to pieces along the way…and hope it’s a very long time indeed! 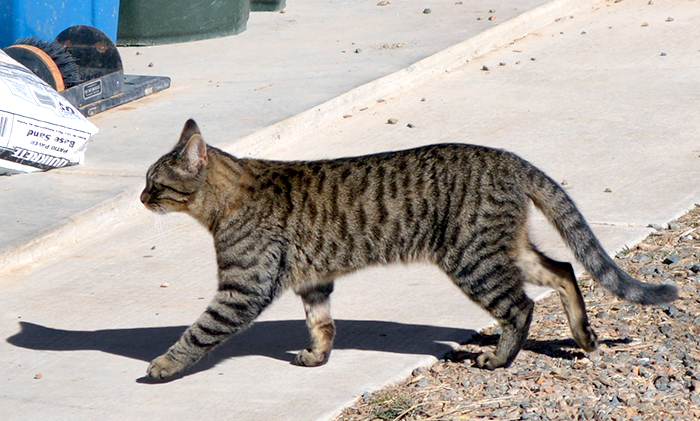 My books are SF/F, mystery, paranormal romance, and romantic suspense. My dogs are Beagles, my home is the Southwest, and the horse wants a cookie!
View all posts by Doranna →
This entry was posted in Behind the Scenes and tagged adventures, Cat!, Mr. McKittypants, ouch!. Bookmark the permalink.