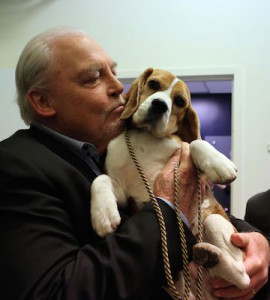 Not your average glamour shot. (Stacy Keach with Miss P, from the Westminster site.)

She is a lovely bitch, with personality and elegance and the most beautiful expression.  And Beagle owners everywhere are bouncing around in the Land of SQUEEE!  Including me!

There’s a thing that happens when a breed is spotlighted this way, especially a breed that often invokes fond childhood memories.  Or has Snoopy as an unofficial spokesperson.  Or has that face and those eyes.

Which is actually very cool.  I certainly want them.  I think Beagles are a wonderful breed, or I wouldn’t currently have three of them while already looking forward to the next.  (Many of us are in the “can’t have just one” category.) 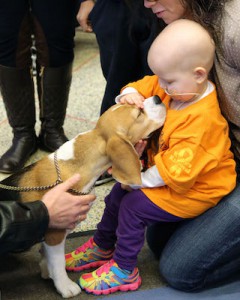 Miss P at the Ronald McDonald house, from the Westminster site. I mean…AWWWW…

But there’s a concern, too.  And that’s that people will base their desire for a Beagle on unrealistic expectations–the trained show dog they see on TV vs. a puppy or adult-adopted dog.

“We expect a family dog” is entirely realistic if you mean “a pack dog who needs family time and is generally good with kids.”

“We expect a dog who slides into the family gestalt as an autotrained pet without purpose-bred behaviors” isn’t going to end happy.

So the message goes out from those who know:  Maybe you want a Beagle, maybe you don’t.  Do your research.  Understand the breed.  Don’t fall in love with Miss P’s amazing expression and think that’s what you’re getting out of the box.

This past week I’ve seen a veritable stream of Beagle-bashing commentary.  Such commenters extoll the breed as universally stupid.  Problematic.  Harder to train than a chair.*

*Yes, really.  I’m not offering that trainer any more attention by linking, though.

Could be that those folks are actually trying to do the Beagle world a favor.  You know, beware the Beagle Puppy Rush* and all that.

*Any breed puppy rush: the resulting mess of poorly bred and discarded dogs in the wake of a surge of popularity due to a movie or public event involving that breed.

Even if so, I’m not buying it.

It’s not that I don’t share the concerns about a Beagle Puppy Rush.  It saddens me to think of any Beagle with a family who considers their dog stupid instead of delighting in the nature of the breed’s intelligence.

It really saddens me to see spindly-legged little creatures with Precious Moments features for sale on one of those Internet sites.

But I guess what I’m saying is this:

I feel it’s perfectly possible to celebrate and admire a breed for what it is, and still make it clear that it’s not the best breed for everyone.  To urge people to do their research without vilifying dogs along the way.

There’s a big difference between “This breed is too [bashing words]” and “This breed’s [temperament/physical nature] isn’t something that works with my life.”  There’s no need bash the breed along the way.  There’s no need to bash anything just because it’s not our preference.

Beagles were bred to chase rabbits, and that takes independence, persistence, a nose, and vision tuned to movement.  Along the way they acquired a sense of play and curiosity to rival any cat.  They’re pack dogs, so they mostly get along.

As part of that independence, persistence, and curiosity, most of them will constantly test their boundaries.  Some of them will do this in a passive aggressive way that makes you feel like a big poothead for enforcing the rules*, but best you not fall for that.

*Of course, if you enforce rules with no attempt to train them first, then you are indeed a big poothead, and they know that, too.

As far as a Beagle is concerned, every option is a possibility until you convince them that it’s not.  And then sometimes until you move the chairs out of the kitchen so it just really isn’t.

The bottom line is that the merry little hound makes a wonderful partner.  But those who want an easy companion/autopilot dog probably shouldn’t get one.

In the meantime, “A chair is easier to train than a Beagle” is just rude.  Whereas “A Beagle has a more persistent intelligence than you may want to deal with” is a lovely truth that will aim a prospective owner in a better direction for that particular family.

(And to the woman who never discerned half a Beagle lifetime of clandestine pottying behind the couch, or who walked a slipped collar for several blocks without realizing she was without her dog?  Really?  You’re blaming the dog for those things?)­­

Know what you want, get what suits you, and don’t breed-bash along the way.  So there.

My books are SF/F, mystery, paranormal romance, and romantic suspense. My dogs are Beagles, my home is the Southwest, and the horse wants a cookie!
View all posts by Doranna →
This entry was posted in The Dogs! and tagged beagles, dogs, Opinionated, training. Bookmark the permalink.