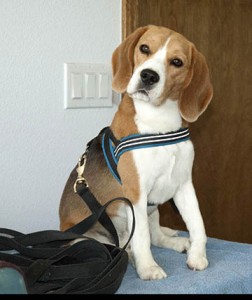 But there are only so many opportunities to do, especially in this area.  So when they come along, we make the most of them.

At the moment we’re prepping for some obedience trials.  We’ve got precious few obedience opportunities; I don’t live near enough to any competition training to make it to classes, not when you combine the distance with the disabling effects of the Lyme and my work schedule. 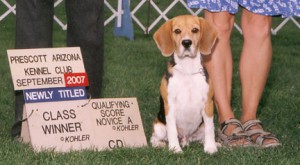 Connery has his Novice Obedience title, but has been off formal obedience since he was attacked seven years ago–only now am I seeing how he feels about it again.  So far, so good.  We’re starting with an intermediate step of a Graduate Novice non-regular title.

Dart currently has his Novice Obedience title and has been training for Open.  He’s not quite ready to enter an Open class.  He’s been working on Graduate Novice.

But Dart is running into two challenges: One, his intense focus falters partway through the string of individual exercises (classic for him, and I’m working on some strategies to help).  Two, his busy little mind spends the time during the long stay exercises spinning up faster…and faster…and faster…

Eventually he stands up.

Fixing these issues isn’t a matter of understanding.  It’s a matter of being able to.  So I take every chance I can get to proof, which means introducing escalating circumstances to test, solidify, and generalize a performance behavior.

So we go to a happily chaotic family dog obedience practice, where I sometimes do my own thing.  Also, I practice little pieces of work wherever we go, making it all as matter-of-fact as possible.  Giving him success.

And then there’s April/May—one rare local fun match and two local obedience trials, one weekend after the other.

Normally I look at the fun match as a chance to “put miles” on the dogs and myself.  Working on my own means I rarely have the opportunity to practice the fine points with someone who knows, so I want to cram in as much for them and me as I can.  Often, I push our boundaries. I enter them in extra classes, and I keep myself hopping between the rings.

This year, though, the Lyme has been particularly bad.  So when the time came to sign up for classes at the fun run…well, I was feeling tired.

And I had the feeling that what Dart needs most right now isn’t experience, but success.  Not pushing, but feeling that the success came easy.  A centered experience.  So I planned this obedience cluster accordingly:

Convince Dart Beagle that trials can feel easy and successful by asking less of him than he can actually do.

So each dog was entered in one class each.  In spite of how uneasy it made me to “waste” opportunity. 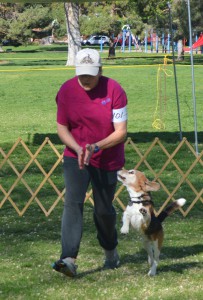 Connery says he knows how to have fun.

And the dogs, having done so well—maybe because their handle wasn’t scattered forward?—looked bouncy and maybe just a little more confident.

So this past weekend was the first of the two local obedience trials.  Next weekend is the second, bigger and longer trial.

The first show didn’t offer a Grad Novice class.  But whereas in the past I’d have pushed the limit and put them in Open due to the rarity of opportunity, right now I’m exploring new lessons.  Rather than risk overfacing either of the boys, I simply didn’t enter them at all.

(Someone make an historical note!) 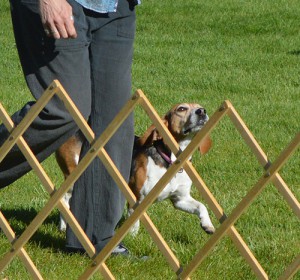 Rena with a happy strut. She earned two of her Advanced B legs with two first places. W00t! Good girl!

I entered Rena in Rally Advanced in spite of her hiatus, because there won’t be any conflict with the boys and she does indeed enjoy rally very much.  It was an excuse to take the boys into that trialing atmosphere for some proofing on the side and meanwhile let Rena strut her stuff.

And as we went through the weekend, I wasn’t stressing…because I wasn’t pushing.

Next weekend, Rena is entered in rally for two of the three days.  Because three, you know, felt like pushing (not her so much as me.).  The boys are entered in one Grad Novice class per day, instead of the multiple classes available.

Not pushing.  Even though it means not grabbing every single possible opportunity in a spectrum of rare opportunities.

What is this feeling, relaxed?

Okay, not totally.  It’s exciting to prepare for trialing, but it’s never relaxing.  But maybe…

It doesn’t have to be frenetic?

It’s not coincidental that frenetic just about describes my life.  Fifty million irons in the fire, trying to juggle contracts and back-up projects and moonlighting tasks and to manage the Lyme, or at least to manage in spite of it.  But finally, after all this time, I’m beginning to wonder if there’s another way.

I’ll never be someone who goes slow.  But active maybe doesn’t mean…

Maybe.  I’m still working this thing out.  But that’s okay, because it looks like Dart Beagle will go right on leading the way!

My books are SF/F, mystery, paranormal romance, and romantic suspense. My dogs are Beagles, my home is the Southwest, and the horse wants a cookie!
View all posts by Doranna →
This entry was posted in Behind the Scenes, D'Artagnan Beagle, Rena Beagle, The Dogs! and tagged Behind the Scenes, ConneryBeagle, Dart Beagle, dogs, Rena Beagle. Bookmark the permalink.