For the past six weeks, Rena Beagle has been on a rabbit-only diet.

Here’s something that most people don’t ponder very often:  rabbit is a lean meat.  A leeeean meat.  It is not, in fact, enough of anything but lean meat to keep a little girl Beagle going, even when fed whole prey.

(Yes, we got her whole ground rabbit, from the most awesome Hare Today.  Every bit of said rabbit put through the grinder.  And don’t let anyone ever tell you that a dog can’t hork up a hairball.)

So Rena, on her rabbit food, quickly lost weight.  Soon I was giving her twice her normal portion just to maintain what weight she had left, and finally I got her a tummy warmer to wear all the time.

(Sometimes she uses a Dart warmer.)

And let us not talk about what rabbit costs.  No.  Seriously.  I don’t want to think about it.  NA NA NA NA I CAN’T HEAR YOU ASKING.* 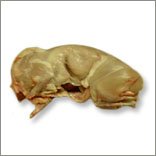 George Takai reviews the Whole Fresh Rabbit!: “Brad and I were very excited to order a few of these delectable beauties in order to reenact the skinning and spitting-over-an-open-fire scene from Game of Thrones…”

The whole point of the diet was to eliminate the possibility that Rena might have food allergies that were causing her some stomach upset which in turn was causing some inflammation in her palate which in turn was causing the incredible, unpredictable, horrifying backwards sneezing that has been escalating for her since it very suddenly started in mid-August at the end of an agility trial run, darned near stopping the entire trial with its drama.

(See what I did there?  All in one sentence!)

Now, I’m no stranger to backwards sneezing.  ConneryBeagle has been through this mess with his own headsplosion crisis, which took years to semi-resolve and resulted in two major ligament injuries for him due to the inhaler meds.

So I know what’s normal, what’s a problem for the dog, and when a certain small girl Beagle nearly passes out from the rising severity of it all.  So we treated her for all the easily-treatable things that could be messing with her and put her on this diet.  Why rabbit?

Because as a dog on a varied raw food diet, she’d already had exposure to just about everything else.

Finally, after six weeks–with the problem still escalating and no other evident cause–Auntie Vet and I made the decision to have a rhino$copy done.

And at that point, Rena was allowed a second protein source–a moment I had planned weeks earlier.  Mutton.  Nice fatty mutton.  I added mutton, took her overall portion down by a quarter, and lo…in one week, she’d gained a full pound.  Which I know because at one week, she went back in for the rhino$copy, and the first thing I did was weigh her.

I have to admit, one of my biggest fears in terms of results was that we would have no results at all.  We really didn’t suspect a tumor, because such things in the facial area tend to be fast growing and we though we would see other signs by that point.

There was no such thing.  Auntie Vet found only some generalized inflammation and a more intense area of inflammation, which she sampled and sent off to biopsy.  Meanwhile, Rena came right on home.

Unlike ConneryBeagle, who took weeks to recover from his rhinoscopy and sneezed a lot of blood along the way, Rena arrived home and demanded food, play, and time to dance her special footie dance.  Thank goodness. 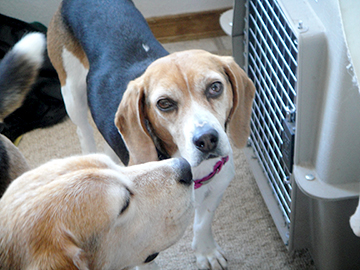 HERE I AM, RENA BEAGLE, BESIDE MY EATING CRATE AFTER MISSING BREAKFAST  HINT HINT

Gratuitous Connery Photobomb included free of charge.  And if you think that’s skinny, you should have seen her a week ago.

That was days ago–now she looks better yet.  And that is the story of Rena on rabbit, and why we’re waiting for biopsy results…and why I have several essential oil blends on order for her, and why she’s about to start on mushrooms, too.  We are stabbing somewhat wildly for something that will help…without hurting.

Wish us luck!  Miss Rena says it’s time for something to be easy.

My books are SF/F, mystery, paranormal romance, and romantic suspense. My dogs are Beagles, my home is the Southwest, and the horse wants a cookie!
View all posts by Doranna →
This entry was posted in Rena Beagle, The Dogs! and tagged dogs, ouch!, Rena Beagle. Bookmark the permalink.

15 Responses to Rabbit for Rena