I told my nieces a very big horse was coming for training, and they said, “He should be named King because he will be the biggest.”

I really want to write a whole blog about him, but things keep coming up…Like green plant things (since it has been raining and all.)

These plants are demanding some press time, so on Monday, I decided to take my little  box camera (uh my only camera) and photograph a few of them.  I thought about taking King, 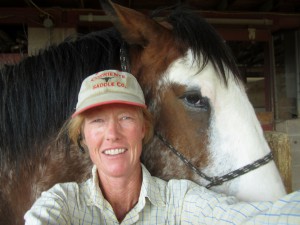 because he is so cute!

But then I thought about getting off and on and on and off to get the photos of the sprouters that I wanted. 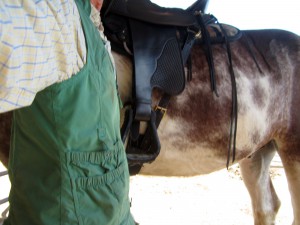 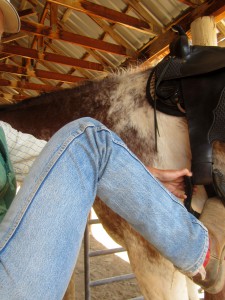 Forget it. I can’t even get my foot in the stirrup!

So I decided to take Toots.  She is about 16 inches shorter.  The stirrup is at my knee. 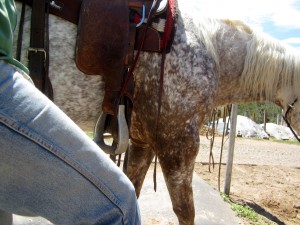 Ok, not really–mid thigh–but seriously, it is a little step to mount Toots.

Off we went.  A thunderhead was building, teasing me with the idea of more rain. We have gotten at least a drop for many days but during the last week, most of the soakers have missed us. 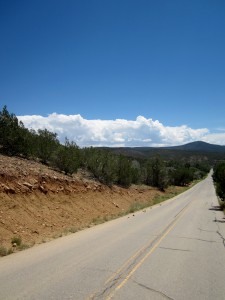 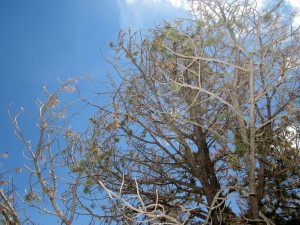 But like many plants around here, it has taken the plunge and gone for life. 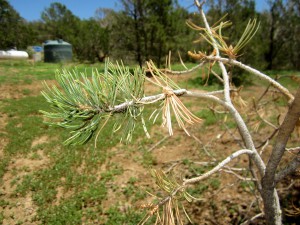 This green tip is all due to the recent rain.  This tree might just live–if we get more moisture. 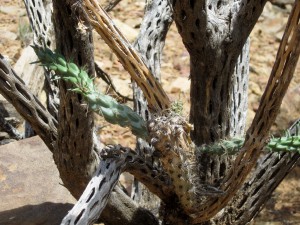 If anyone had asked me in June, I’d have said this cholla was a goner.  All that was apparently left was the skeleton.  But NOOO! Sprouting from…nothing? 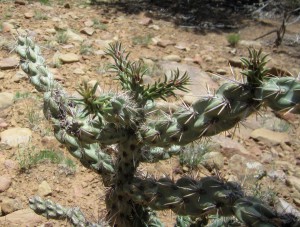 The chollas in better shape (like this one), rehydrated and started adding mass.  Some are even blooming. 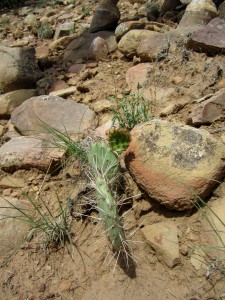 The prickly pear are adding pads (and whose feet are those at the top of the picture?  Not King!  Thank goodness, because they’d take up the whole frame–his feet are probably 5x the size of Toots’ feet–and also I would need climbing gear to remount!)

Around the bend on the trail, the macro-scape shows the dead pinons. 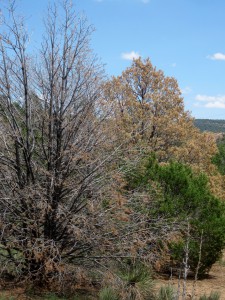 But if we move to lizard’s eye view… 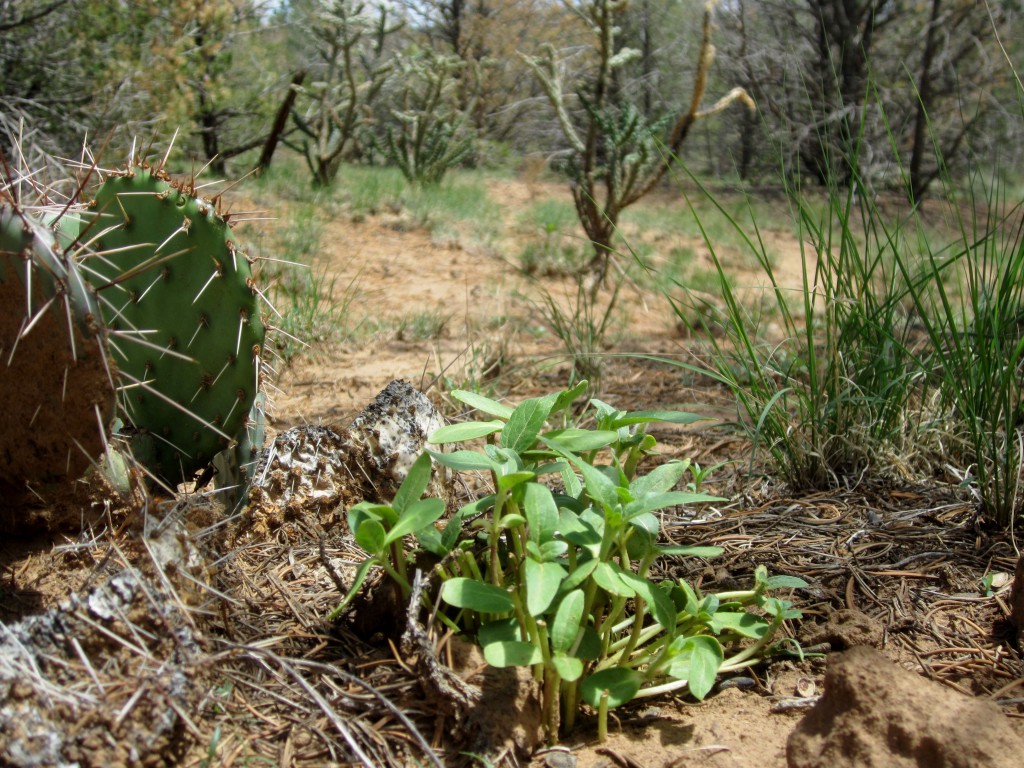 the amount and variety of green is astonishing, especially since last month the grasses were ground-level crispy clumps. Sunflower seeds were hidden under ground (probably cached by a squirrel) and now they are vibrantly sprouting at once. 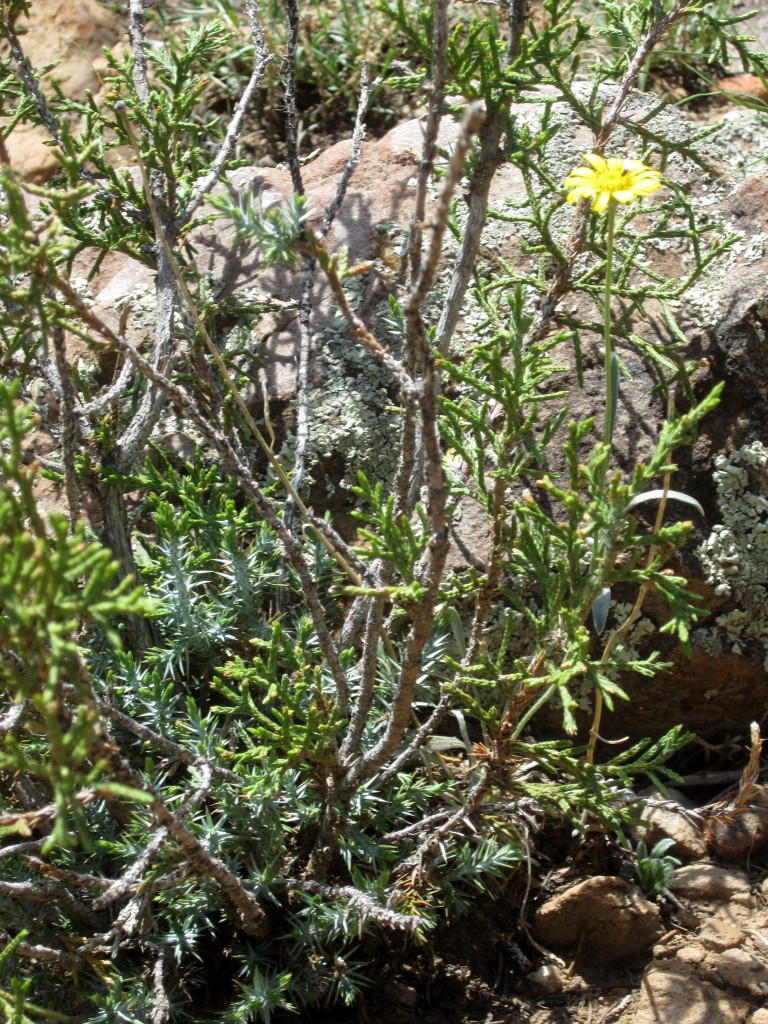 There are even flowers!  This Perky Sue is normally a spring bloomer. The gray-green juniper growth is also new. 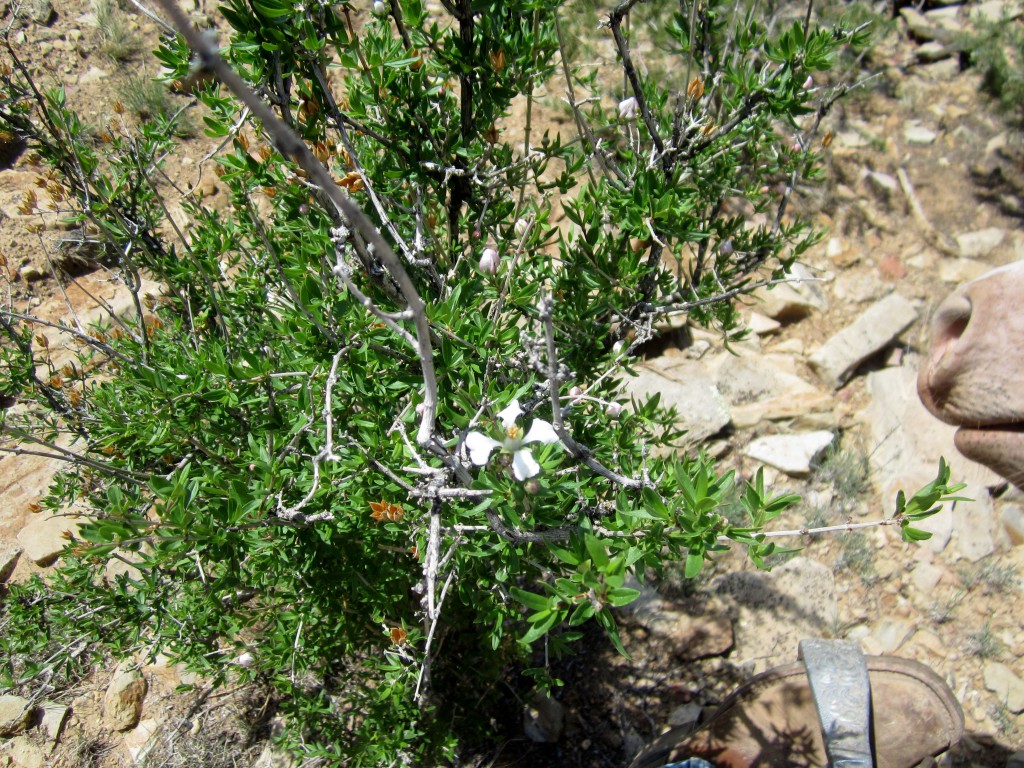 This Fendler Bush is also a spring bloomer.  Toots is trying to eat that flower! I did not realize she had snuck her nose into the picture until I downloaded it!  Photobomber! (I just learned that term Wednesday–twice–an article in the Albuquerque Journal about a rare bird and Rena’s letters via Doranna.) 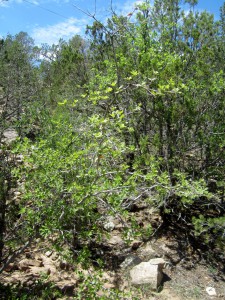 Three weeks ago, this scrub oak had no foliage at all.  What a useful adaptation–winter quiescence followed by drought induced dormancy, then awakened by the magical elixir: water.  Just don’t get me started on the wonderful properties of water or you will have an intro biology class lecture (with Powerpoints) on your hands! 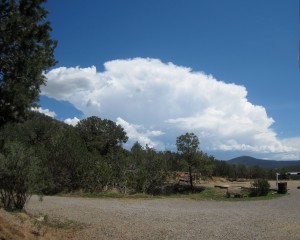 and eventually we got a few drops.  But not enough!

It’ll give Toots a chance to actually taste a flower or two!

Here's the skinny: I have a thing for horses. They make sense to me. I have a small horse training business (it's a "boutique" training business, not because it's super fancy, but because the horses get a lot of personal attention). I also go by Dr. Wilber, and teach biology full-time at a Central New Mexico Community college.
View all posts by BlogPatty →
This entry was posted in The Write Horse and tagged adventures, horses, The Write Horse, weather. Bookmark the permalink.

2 Responses to Sort of Resembles Spring