By Patty Wilber with my assistant, Lupo 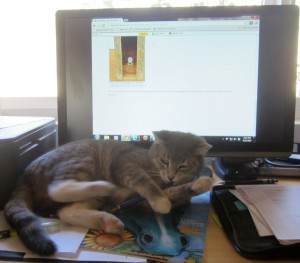 Lupo says: my work is not complete unless i knock at least one pencil on the floor!

There has been a dearth of moisture in the Land of Enchantment, making New Mexico the state with the USDA’s most dire drought rating.

So, on Day 2 of our trip, in Arizona, just barely across the border, we awoke to rain.  Ok, that is overstating it.  We awoke to a slight drizzle.  Haven’t seen that in months. But no matter, We, being Back Country Horsemen (four of us) or Experienced Distance Riders (one of us) were Prepared to Ride, even if the drizzle progressed to actual rain.  We did not drive all this way, get health certificates and Coggin’s tests for the horses (which no one actually checked) to get washed out!

But first, JD’s tossed shoe (from his attempts to out-compete Peter’s mare,  Squirt for possession of my mare, Toots) needed tacked back on.   Our guide, Justin Tso, got his cousin to come do it first thing. 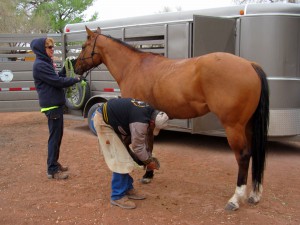 JD holds his feet still, but likes to nibble on his handler while being shod. Marcia loves that.

I waited it out in the “comfort” of the trailer. 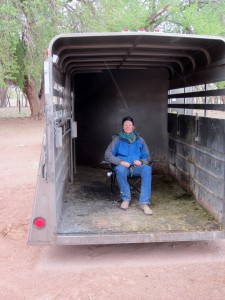 Then we got going.  We loaded the horses in the trailers and drove to our trail head because the day’s trip was to be a one way ride down into the canyon back to our lodgings.  We would then shuttle up to get our vehicles.

Fortunately, there were many amenities at the parking spot (or not). 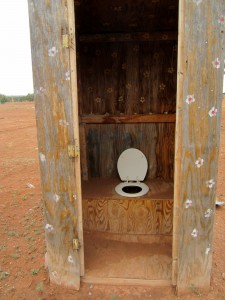 Dust drifts and doorless, but better than the “comfort” of the trailer!

If you look to the far lower right of the map, you can see a horse icon. That is where we parked. We rode down Bat Canyon (farther right on the map) into Canyon de Chelly and back to the Thunderbird Lodge (left of the map) along the Canyon floor . 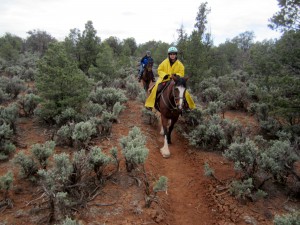 Mary Ann in her slicker! It was chilly to start with. I lent my emergency ear warmer to Justin and a pair of rain pants to Marcia. We were all comfortable and it did not rain much at all.

The aroma of the sage in the damp was invigorating. It made me sneeze! We rode towards Bat Canyon.  We did not see any bats. We reached the edge. 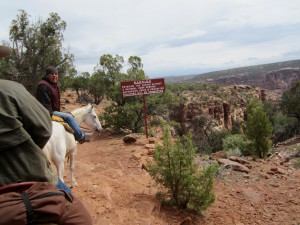 The trail didn’t drop right off, but pretty close.

On Saturday before we left,  I took Marcia for a test ride on JD (he’d been here a couple months).  We went into a nearby “canyon”–very small compared to Canyon de Chelly–but with a rocky and technical descent.  She called me ” The Crazy Rock Lady” (or something similar).

Take our Saturday “practice” descent of 50 feet and expand into two miles.

The Bat Canyon trail dropped down along a spine with a lovely CLIFF on the left but a  comfortable trail bed–except for the that one rock slide spot where the horses could slip, lose their footing and plunge over the edge!  The scenery would be lovely on the way by…

Made that.  No horse issues. Human breathing issues.

Then the trail hair-pinned left, and veered very steeply, clinging to the canyon side. The track was ancient.  Justin said perhaps dating to the times of Anasazi (they were the makers of the cliff-side ruins.)

The good point about the rest of the Bat  Canyon trail was that it had a berm, so I never felt like I was going to pitch off the edge.  However, it was highly eroded, so the foot-bed was anything was smooth. There were huge rocks, small rocks, rocking rocks, tilted rocks, slippy rocks and mini gorges.  At no time were all four horse hooves at the same angle.  Every step required planning by both the rider and the horse.

Any equine with a poor sense of body awareness or one that was too tightly wound would have ended up sprawled on its knees or with a twisted ankle.  Many people might have had the same experience if they were to walk this trail.  And, as I mentioned, it was STEEP!

There was nowhere for six animals to comfortably stop, so there was nothing to do but try to maintain an even, measured pace that all the animals could accommodate, and forge ahead.   Near the end, several of our trusty steeds were showing signs of muscle fatigue–their legs were quivering.  Some us might of been hyperventilating.

Toots, the squat tank, is so muscular and low to the ground, she’s a like a little ATV! She handled it really well–and brag brag–then went to a show on May 11th and won Ranch Pleasure, took a second in Ranch Trail, and a third in Reining!)

JD was also magnificent.  So, may be I’m not so crazy?  In fact, four of our five horses have covered my “crazy rock lady trails”, three of them extensively.  I use those trails for training because it is interesting for the horses while helping them learn to use their bodies and watch where they are going.  It is good for the minds of the show horses and boy did it help on this trail!

There are no pictures of the descent.  We had to steer! 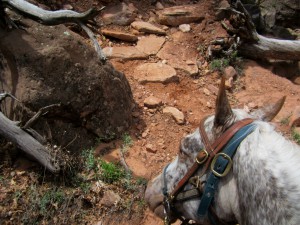 Toots says: there is no way i am going back up that, so don’t even ask. (the part shown is not even a hard part but at least it shows there are lots of rocks!.) 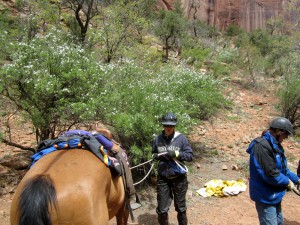 We shed some layers and took a sigh of relief that we had survived. This is not the best picture, but the bush behind Marcia is a Fendler Bush in bloom–we saw other flowers, too–unlike NM where it is so dry we barely even have weeds. 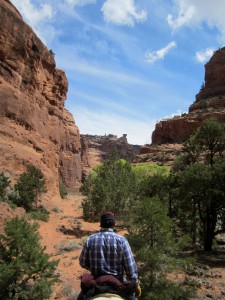 Along the floor of Bat Canyon towards Spider Rock.

The rest of the ride was easy and spectacular! 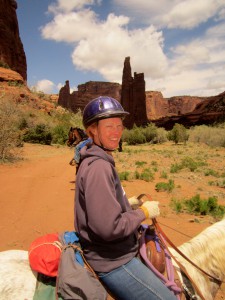 According to Justin, there was a woman that used to live near this spire and she wove rugs with the spider pattern.  I know very little about Navajo rugs, and did not find anything listed as the “Spider Pattern” in a quick search. Apparently, there is no one left who knows how to do this pattern.  The rock is named after her. 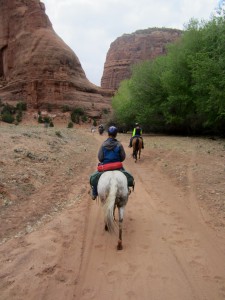 Peter took all the Day 2 pictures after the descent. Tons of gorgeous scenery! 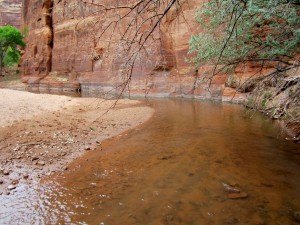 We crossed a lot of water! Toots got to where she went right in and did not take the first opportunity to get out–she’d wade along until I made her to get out.  She also drank frequently. This is great because not all horses will drink strange water and thus may be prone to dehydration on long rides. 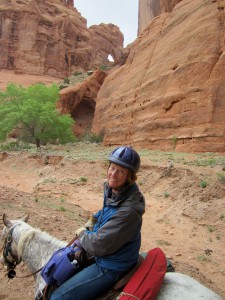 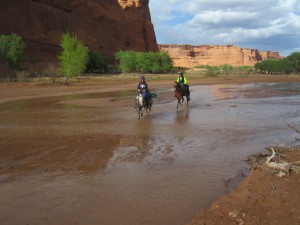 Trotting across water! Not enough splash to be pictorially dramatic, but fun anyway! 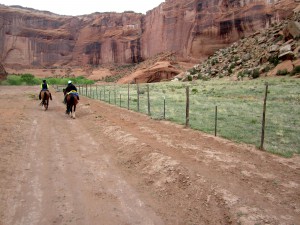 On the right is a fenced area–keeps out the feral horses. On the left, the horses have access. As part of the management of the Canyon, invasive trees (Russian Olive and Salt Cedar) are being removed. The horses are also non-native. They need to go. I think the picture makes the point. 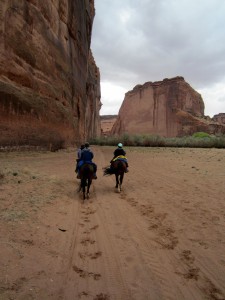 The scenery was like this all day long. Amazing!

On Day 3, we rode to Little White House Canyon–see map.  We rode along the paved rode with cars whizzing up behind us.  I found that a little unnerving and was happy that Tulip was bringing up the rear when the motorcycle cavalcade roared by.  All the horses handled the traffic well.  We cut South and got out on some flat rock and wide open spaces. 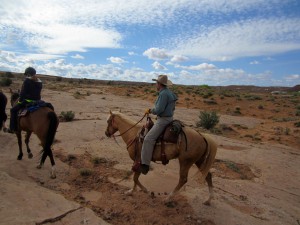 I really liked the sky in this picture.

Then we hit sand dunes.  Think those are marked on the map. 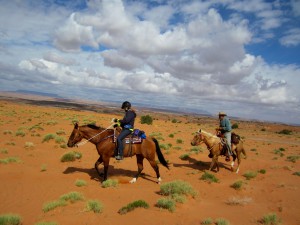 In some places there was no vegetation and just big sand drifts. We galloped over them!

Little White House Canyon was smaller and more intimate than Canyon de Chelly.  It also gets far less tourist use, so it was just us.  There were, of course, lovely rock formations. 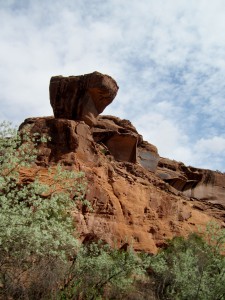 And the Little White House Ruin. 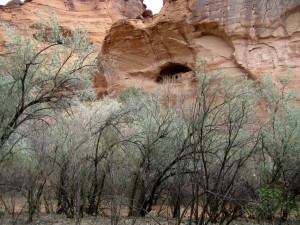 This is a stand of Russian Olive that has invaded,choking out the native vegetation, but it did make a nice fore-ground for the photo!

Removal of the Russian Olive has brought the water table up quite a bit in Canyon de Chelly!

On the way back, Justin pointed out an ancient trail from Little White House Canyon to White House Ruin in Canyon de Chelly.  Not enough time to ride that, but it sounded intriguing!

Or exploring Canyon de Muerte (the northern branch), or riding to the end (37 miles) on a two day trip…or…for something completely different, maybe Nevada?

There are so many places to explore!  I sure enjoyed this trip with a great group of friends and a bunch of horses I also know personally (especially Toots! Thanks Wendy!).

Here's the skinny: I have a thing for horses. They make sense to me. I have a small horse training business (it's a "boutique" training business, not because it's super fancy, but because the horses get a lot of personal attention). I also go by Dr. Wilber, and teach biology full-time at a Central New Mexico Community college.
View all posts by BlogPatty →
This entry was posted in The Write Horse and tagged adventures, horses, riding, The Write Horse. Bookmark the permalink.