That’s right.  It’s a post that includes both the Demon Blade series and the small new Beagle girl!  I’m not even going to try to be clever enough to tie those together…

TAMING THE DEMON is juuuust about on the shelves–any day now!–and I’m getting ready for the Supernatural Smackdown that will ensue.  Not that I had any clue what this was until recently, but I was delighted to receive the invitation to join in the fun and I suspect I’ll figure it out as I go along.

Mind you, I don’t expect to emerge with any sort of victorious flavor, because I totally don’t have the time or inclination to batter people to vote for my guy.  But we’ll have fun nonetheless, and the people who derive glee from harvesting votes will find me a usefully easy stepping stone. 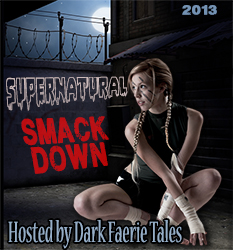 Here’s what Dark Faerie Tales has to say about the event so far!:

It’s that time again…Supernatural Smackdown. We wanted to create a fun and interactive event that would highlight all the new paranormal titles releasing over the next few months. We thought a battle theme would be perfect since everyone loves action!

So the second annual Supernatural Smackdown has arrived!  Characters from all over the world unite for the premiere entertainment event.  Held in a super secret location, supernatural characters will pit their talents to win the World Champion title and everything that comes along with it.  [ed note: have no idea what this means, but it’s gotta be good, right?  Right?!]

Readers will vote to move characters into the next round.  Final end on May 31st  and the supernatural bad ass will be officially announced a week later.

Are you ready, supernatural fans? Let’s get ready to rumble!

So there you are.  Devin James from Demon Blade will be in the middle of it.  He’s not much for a random brawl, but that demon blade…well, let’s just say it’s sharpening itself as I type.

In part two of the fun parade, BEAGLES!

ConneryBeagle is still working his rehab and will be seeing a new vet on Thursday (a second opinion sort of thing on a particular therapy, about which I’m wavering), Dart Beagle is gearing up for another stab at that novice obedience title, and both boys are completely enthralled with newly arrived Rena Beagle.

Except for a few introductory moments, she’s never had to do anything other than vibe at them to get them to behave.  She owns all the best beds and doesn’t think twice about it, and she says this is how it should be.

Rena herself is slowly settling in.  She has a big adjustment to make–the environment didn’t have her permission to change so radically around her, she says–and of course she misses her old pack terribly.  However, she visibly settles in a little more each day, and her personality is starting to peek through.  Although she’s got a lot of training on her, I’m making it easy right now–all of what we’re doing falls into the category of “play” and “party.”

And here we are with a little of that from the weekend, when she came along to Dart’s VST (urban tracking) practice. 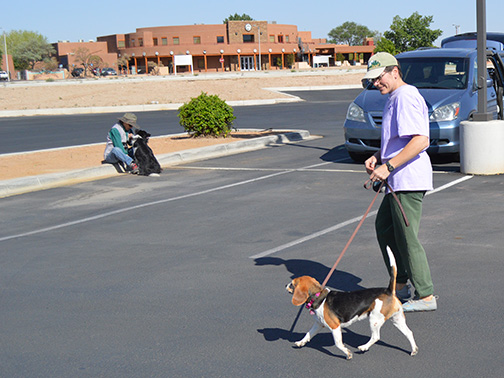 Rena shows off her snappy side gait and a little bit of her fun attitude. 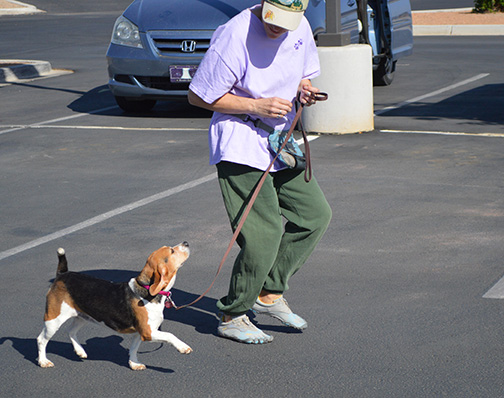 And then she shows off her little strut!

My books are SF/F, mystery, paranormal romance, and romantic suspense. My dogs are Beagles, my home is the Southwest, and the horse wants a cookie!
View all posts by Doranna →
This entry was posted in Behind the Scenes, Rena Beagle, The Dogs! and tagged Demon Blade, dogs, Nocturne, Rena Beagle. Bookmark the permalink.