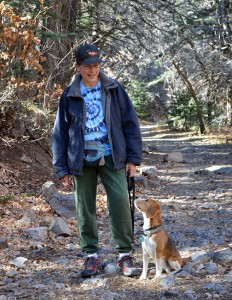 So, you know, sometimes when it comes to settings for my books, I make things up.

And sometimes I create Tardis-like areas in the middle of real places, and then I make things up, but within those parameters.

And sometimes I use real places and I research the patootie out of them.  It’s easier now with Google Earth and satellite maps and such, but boy, when I was doing Capetown for the FEMME FATALE novella I had to engage some serious research mojo, and I was thrilled when someone who’d been there said that I nailed it.

Every now and then, I have the chance to tramp around a book setting in person.

There should be a caption that follows me around at times like these.  “Step back!  Make room!  The muse is about to WALLOW.”

Last weekend, I should have been at an agility trial.  Instead, the night before the departure, ConneryBeagle was badly injured.  We cancelled the trip and there are some details and updates over on FaceBook, but for now I’ll just say it was a freak yard thing, and no, we don’t know if he’ll be able to run agility again, and yes, I’m still crying.

And also, that there’s only one thing to do when stuff like this hits: not only does the muse get to WALLOW, but I take her out to the kind of place that comforts me–up into rugged trails. 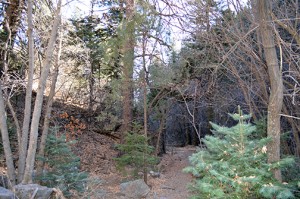 Convenient, then, that I’m working away at the third RECKONER book in the background of my other projects, and that a certain amount of the action takes place on the side of the very mountain looming up to the west of Casa Durgin.

So I grabbed up some company and I grabbed up Dart Beagle, and off we went.  For the first little bit, anyway–then the trail got more rugged and it was only me. 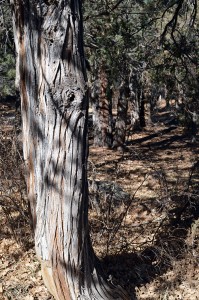 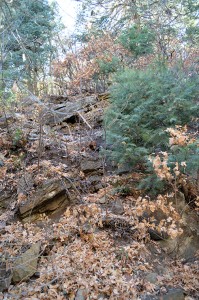 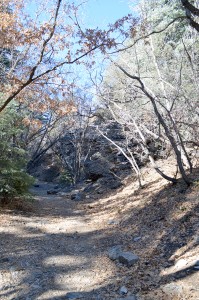 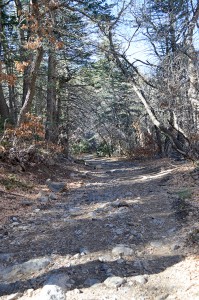 I didn’t have the camera for that part, which is just as well–it would have banged around a lot, as the trails were up and down and around and mostly carved into the side of mountain ridges.  Narrow little trails, and during the rare moments when I met up with someone coming the other way, I was very glad for Dart’s boingy qualities.  More than once I asked him to levitate up the side of the mountain to perch like a little mountain goat while other hikers–and their significantly larger dogs–passed us by.

(Dart, it must be said, apparently thought the “perching like a little mountain goat” was the best thing EVER.)

I was also pleased that all of those dogs were on lead, as they’re supposed to be.  That would have been a bad place for the “He’s friendly!” routine.  But everyone was pleasant and responsible, and for the most part it was just me and Dart, surrounded by awesomeness.  I love wandering the microclimes of a desert forest–everything changes so quickly with altitude and orientation.  Is it south or north facing?  Shaded by another ridge, or out in the open?  High or low?

Dart thought it was awesome, too.  Four miles of nonstop awesome.  At one point he was so excited by all the new scents that he started giving voice right there on the trail.  It was an Intensity of Want.  And it gave him a whole new perspective on what it’s like to walk together.  Real life stuff, not ho-hum down the road.

On the return loop, in the flatter, wider area near the parking lot, I did run into a couple who thought their three very large dogs were speshul off-lead snowflakes.  Naturally, at least one of these loose dogs was completely non-responsive to recall, and approached us with a dominant body language–head low, neck stiff, tail raised high and held tight.  I’d gone off the trail to put Dart up on a picnic table, but onward it came, so I smacked my nice stout walking stick in its face (against the table bench, which tells you how close it got).  “I don’t know you!” I said loudly.  Smack!  “You are not welcome!” Smack!

Dog’s dawning realization: Crap, this lady is nuts.  Maybe I don’t care THAT much about bullying that Beagle thing.

Dog’s Owner (everybody, join in the chorus!): He’s friendly!

Me (with the stick still locked and loaded): I DON’T CARE.

And maybe I was channeling Garrie’s reckoner attitude, because I didn’t.  I’m tired of stressing over confrontation caused by people who think their dogs are speshul snowflakes.  Responsible dog owners make sure their beloved pets don’t cause problems for other people.

So they moved on to bother the next person who didn’t want to be visited, and we went on our way unruffled to finish up the hike.

Soo…  Connery’s still injured.  The world has still been sad and overwhelming lately, with the Lyme flaring up to greet it.  But Dart had a great time (and slept hard on the way home!), and I got to wallow in a couple of hours of hiking and not thinking, and the muse got to wallow in scene setting, and found some great story landmarks and even a couple of plot developments.

Soon enough, the season will turn, and those trails will be impassible with snow and ice.  But before then, the muse says, I’ll find another day for wallowing.

Where do you wallow? 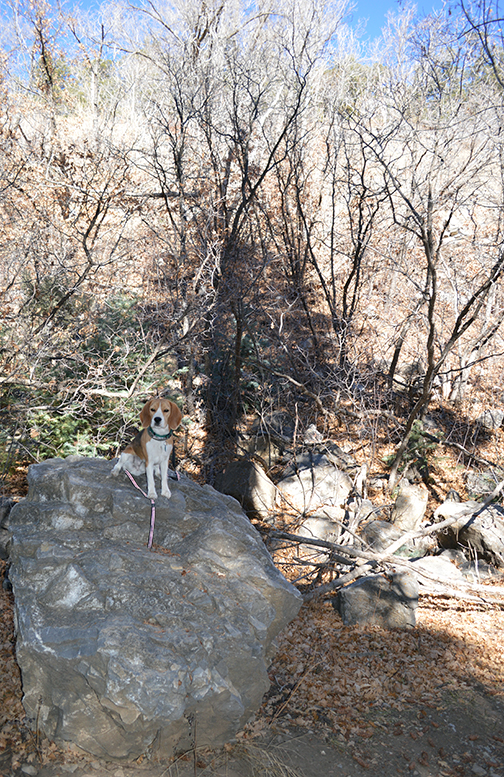 My books are SF/F, mystery, paranormal romance, and romantic suspense. My dogs are Beagles, my home is the Southwest, and the horse wants a cookie!
View all posts by Doranna →
This entry was posted in D'Artagnan Beagle, Land Keeping, Writing and tagged Dart Beagle, happy sigh, land, muse. Bookmark the permalink.