The Hills are Alive…with the Sound of Hoof Beats

Duncan has always had a weird presumption about the ground beneath his feet, which is that it won’t dare to vary without his consent. Let’s just say that unlike my cat-footed young gaited mare in the Appalachians–who occasionally saved my life with her sure-footedness in challenging ground–I don’t make any assumptions of Duncan.   And for the past many years, Duncan has been on fairly flat ground. Some slope, but evenly done. The occasional trail ride in a distant cinder cone foothill with narrow switchback trails he had no idea how to handle–

(NO, horse, you do not obsess about flinging one lone fly off your head when navigating a hairpin turn to a narrow down trail on a steep slope!)

He, he assures me, exists for loftier things than watching his feet.

This winter (mudmudmud), his riding ring was the mile loop of dirt road that climbs up out of the ridge-nestled bowl in which we live, flattens briefly as it curves around, and then strafes down to the cross-road that feeds in from the outer world. It’s not so steep that you instantly go, “Wow, that’s straight up!” But those of us who have biked it or driven it in slick snow have a very good idea of its slope.

So does Duncan, now. Just as he’s had a few forays into the gorgeous nearby trails that wind up and around the ridges here, with their ditches, mini-arroyos, scattered rocks and boulders, and a few places where all those things are combined on short but “gee, I hope my saddle doesn’t slide off his butt/off his neck” inclines.

(Note: yes, one day I WILL dig out those old pictures, Mona Rethia!)

Add in his pasture–a flat north area, a flat south area littered with agility equipment, and the mild arroyo connecting them between–and oh yes. Duncan is learning to respect the ground.

Not without lessons to learn–he has a particular problem with deep, narrow ditches, in which he doesn’t seem to perceive the drop–but a little experience should help with that.  Er, I hope.

More than that, the hills are s taking an aging horse whose long-term stifle issues were getting the best of him, and turning him into a horse who knows how to balance himself going up or going down, in all three gaits, with or without rider. The work is building muscle and flexibility…and it’s taken years off his frame in the four months we’ve been here.

DuncanHorse: Nineteen years of Lipizzan, learning to be young again. 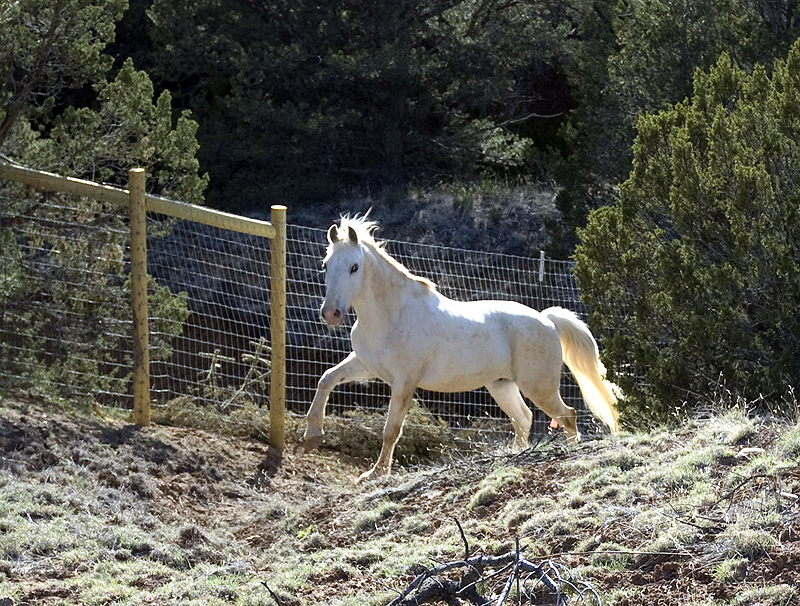 My books are SF/F, mystery, paranormal romance, and romantic suspense. My dogs are Beagles, my home is the Southwest, and the horse wants a cookie!
View all posts by Doranna →
This entry was posted in DuncanHorse and tagged arroyo, Duncan, land, riding. Bookmark the permalink.