This is Doranna Durgin’s WordPlay Blog. I’m glad you’re here–whether it’s to learn more about my books, or chat about dogs, horses, and reading.

On Fridays, The Write Horse usually stops by for life with horse training, written by Patty Wilber.

If you’d like to reach my Webstead, you can clicky on that link you just passed. Right there. Behind you! The one that said Webstead.

PS although I use a plug-in that allows commenters to sign in, it’s easy to post as a guest and guest commenters are welcome!

Yep, it’s that time of year again…  From now through March 8th (which is not all that far away), Smashwords is making it dead simple to put books on a big blow-out sale.  So, you know…I did.
All of my legacy work–the stuff that went out of print and then reverted to me so I could do my own stuff with it–is on sale, from free to 25% off.

Click through to the Continue Reading for a list of the title links & discounts–including all my short stories.  The proper codes are right there on the book pages, so…like I said.  Dead simple.

Not to mention I’ll be inviting friends to list their legacy books here, too, so if you click on the link to be notified about further conversations, those posts will come to you as they go up.

END_OF_DOCUMENT_TOKEN_TO_BE_REPLACED

More of an Underwear Evolution than a Bloggy Evolution. But it amused me.

I’ve never been particularly good at saying, “Hey!  I’m a writer!  I would really like it if people bought my stuff, read my stuff, and hey, even enjoyed my stuff.”  Because it’s not just how I make my living, such as it is–it’s what drives my life forward.  Writing.  Reading.  Knowing it matters.

Consequently, I get a little shucky-darn when it comes to putting my stuff out there.  For one thing, saying, “I would really like it if…” leaves one entirely open to the crushing response of “but we don’t actually like you.”  (Ouch, right?) END_OF_DOCUMENT_TOKEN_TO_BE_REPLACED

W00t for me! Book View Café –all indie, all authors, all professional–has launched A Feral Darkness as a lead title!

END_OF_DOCUMENT_TOKEN_TO_BE_REPLACED

Scoop!  Scoop!  eReader News Today is featuring WOLF JUSTICE at 99c.  Since TOUCHED BY MAGIC is a Try-Me Freebie, that adds up to two books at 99c.

But only for today and tomorrow.  So go for it!

Magic is back–and only the man who once tried to stop it can save his world from what happens next.

Magic is back in Reandn’s world–and when wizards use it to slaughter his Remote Wolf Patrol, he is left adrift in a society still reeling from the changes wrought by magic’ return.

But King’s Keep offers him a chance to regain his rank: escort the beloved Higborn woman through the rebel-torn Resioran border to King’s Keep. Soon enough Reandn is embroiled in wizard’s treachery. To make it out alive–to keep Kalena alive and prevent a catastrophic wizard war–he’ll have to face his own worst enemy.

Praise for Touched by Magic:

“I loved Touched by Magic and was sorry to see it end.”
–S.M. Stirling

“Mystery, suspense, and loyalty fill out the plot, but primarily this novel focuses on the dangers of obsession. it also deals hauntingly with loss: of loved ones, of home and status, of entire ways of life…. It will keep you guessing right to the end, and there are no simple solutions to the complex problems presented.”
—Hypatia’s Hoard

If you’d like to see the real thing, complete with all those nice click-throughs, then here’s a link!

People can come up with all sorts of lame justifications for stealing.  I have no interest in the justifications…and no sympathy for them.  Pirating digital works is stealing, and no…no one is entitled to read my stuff for free unless I put that work on free.  And pirates, no matter what they think of themselves, are not modern-day Captain Jacks.  Also, they totally aren’t Johnny Depp sexy.

That, I guess, would be my position statement on the whole thing.  And yet…

This has been an interesting week for pirates.  There was a brazen pirate shop that popped up with a huge selection of books (including quite a number of mine)…and that charged for them, too.  Well, huzzah!  That site has already hit the dust, but of course there’s already another of that brazen sort popping up.

And then there’s scribd.

Those of us who have been around the Internets for a while remember when scribd started up, and that there was a whole big lot of froo ha ha along the way.  They’re still remiss; they still allow blatantly pirated works to be posted.  But they do take them down if you ask (in my experience).

So why am I not asking?

Because the work currently being pirated there is called Heavy Metal Honey.

Heavy Metal Honey was one of Harlequin’s early e-reads, written to a fairly exacting pattern of chapters and word count.  In this case, it was published as a supplement to the Bombshell line, and it’s a story in the world of the Hunter Agency, featuring two of my favorite characters: Kimmer and Rio.

Okay, Kimmer and Rio fans…raise your hand if you’ve even heard of Heavy Metal Honey.

Well, enjoy!  And by all means spread the word.

But pirates still suck.  Welcome to the world of the inconsistent human.

Sigh.  It didn’t used to matter.

I mean, it always mattered to ME, but I could console myself that strikingly nasty or baffling reader reviews didn’t matter in the big picture.

Of course, now reader rankings matter a whole lot, and one or two ugly ones can really skew the curve and affect sales.

And they still matter to me.

A nasty review is pretty obvious, both to readers and the author.  A baffling review…not so much.  Recognizing those takes knowing what’s in the book in the first place.

It’s one where you wonder if the reader was even looking at the same book.

A Feral Darkness just got one of those.  Someone is terribly upset at me for making certain statements about religion that…

Well, that wasn’t the book I wrote.

In fact, it was the book I assiduously steered away from writing.

It would be easy to put this down to different folks/different strokes if the Catholic religion wasn’t specifically referenced several times in the review…along with the assertion that my intent is to make fun of that faith.  To mock it.

Now watch me scratch my head.  There isn’t any true presence of the Catholic church in this book (there’s a character who’s a lapsed Catholic, on the whole because of the conflict with the pagan elements).  There’s a pastor in the story, a thoughtful guy who happens to be very protestant, in his very protestant church.  I was rather fond of him, actually–I thought he tried to do his best to handle a difficult situation.

But the truth is, the book has pagan elements and pagan magic.  That’s kind of the whole point.  I wove together enough of those historical pagan elements across cultures (never mind the book learning…I called a monastary!)–to catch the eye of a British scholar, who interviewed me a couple of years ago and included A Feral Darkness in the resulting publication.  (I was beyond excited about that, yes I was!)  There’re ancient Celtic gods, ancient Celtic dogs…and one contemporary woman who has to make it all come together in the context of her rather practical life.

I hadn’t meant to examine the interface of religions, but the character went there (she rode her bike there, actually), and I had to follow.  It was not easy writing…but maybe that’s why the book has connected with so many people over the years (and boy am I grateful for that!).

Sometimes, in order to make that connection, you have to reach far deeper than is truly comfortable.  It’s a vulnerable, vulnerable place to be as a writer.

So it does baffle (and ouch!) me that anyone could take the resulting book as a mockery of any given religion, and it makes me a little sad.  On the other hand, I think what also surprises me–a lot–is that someone who feels this strongly about the (“disturbing”) interface of religions would not only pick up the (“sickening”) book in the first place, but would read it through to the (“pathetic”) end.

It still matters to me, though. 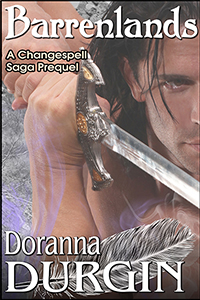 Because if you’re anything like me, you mean to follow through on something but don’t always get there during the busy times…

The Smashwords sale ends…today!  March 9th!  All of my books are on sale in one way or another, and they’re all clickable through my pages at Backlist eBooks.  There are a couple of freebies there, including BARRENLANDS–the first book in the Changespell Saga with Dun Lady’s Jess.

(You can find that series introduction on free at most of its retailers, in fact–the details are at the Backlist eBooks page.  Amazon has been slow to get on board, but you can report a lower price to them if you’d like to see it there).

In other news, check upstream for the Imperfect Service Dog post–today is the last day to enter for freebies in that event, also!

In other, other news, I’m featured at Laurie’s Thoughts & Reviews Blog, the paranormal side of the force.  Stop by and say hello–there’s the chance to win the entire Changespell Saga (In fact, I’m so clever (shut up!) I just figured out how to include that form here!).

In news that offers no reminders but plenty of nice grins, the current book in progress (a Nocturne in my Sentinels series, Lynx Revealed) is heading to the halfway point after its first month under way.  Whee!

In final news…I think…we have snow on the ground and still fluttering around in the air.  This is probably more important to me than it is to you.  But for this thirsty, thirsty land, it is a good thing indeed!
a Rafflecopter giveaway

All of my books (26 titles!) are on sale, from 25% off to free downloads.  Given that the books are already listed below publisher prices, that makes them…well, terribly affordable.  (We do not use the word “cheap” around here!) 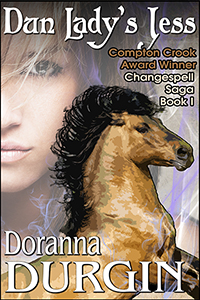 Most of the books are my earlier titles–some of them in updated versions, some with a bit of extra material.  There are also some original pieces (A Silhouette Bombshell that was to be released in February of that year…when they discontinued the line in January.  A couple of novellas I’ve written for the love of it.  The short story collection that quietly does its best to trickle funds toward ConneryBeagle’s vet costs).  Those are identified as such.

ePublishing does more than just get these out-of-print titles on the shelves (so to speak) again…it gives me a renewed freedom in my creativity…it gives me options.  Sales like this are a chance to give a little bit back!

My self-produced titles are all listed on my page at the Backlist eBooks site.  At one discount or another–the coupon for which is right there on the Smashwords page for each book–they’re all on sale through the 9th.  Happy reading!