Alice joined us almost three years ago–already a champion with two litters under her belt, and ready to have her own pack.  She’s a shy, giggly, soft girl by nature, which means training her is a gentle dance.  I gave her lots of time to understand that the training game is a game and she ultimately earned her novice rally title with high scores and placements.

That single rally title (after her CGC, ie Canine Good Citizen) was all we intended for her to earn, although now she hip checks the boys out of training space to take over, so you never know.  Still, her primary job here is to be just what she is by nature–a sweet loving girl who fills the Pack Princess hole in our household.  And did it pretty much from the moment she arrived.

Tristan has had some life interruptus, between an ultimately unnecessary obstruction surgery* and some illness/injury on my part, each of which encompassed one of our active seasons.**   Oh, the agility trials we’ve had to cancel!  Wahhh!

*(Long story)
** (Some areas, handlers can trial every weekend without driving too far.  Ours is not one of them. Our opportunities are highly seasonal.)

Nonetheless, at four years old he’s going gangbusters on the Fun Front. He’s crazy to DO things, and to learn, and to be with his people.  He had his VCD2 while he was still 2yo, and is at this point well toward his second MACH as he trains for utility (this is slow going, due to aforementioned human illness) and works toward his VST/tracking championship.  He has plenty of time left for both of those endeavors, human health willing, so I’m not pushing it.

His motto is “Do all the things, all the time, and do them with quivering excitement!”

Tristan also qualified for AKC Nationals even before Dart did. Since Nationals is one (heroic) day of driving away this year and the chance of having two dogs qualified again on a year when it’s that close and I can manage health and work concerns is in the realm of infinitesimal, we’ve decided to take the hermit (me) out of her hidey hole and go for it.  A trip of a lifetime sort of thing for us for which our goal is to enjoy the camaraderie, the dogs, and the bigness of it all.

This, as it happens, occurs soon!  But the story installments are already scheduled and will go on, and surely that’s the most important thing… 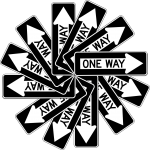 Definitely working better. But not without ongoing opportunities to practice. END_OF_DOCUMENT_TOKEN_TO_BE_REPLACED 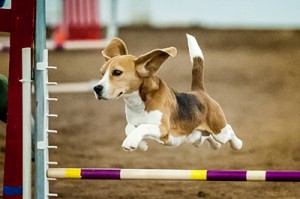 It would be easy to get bogged down on the details.  END_OF_DOCUMENT_TOKEN_TO_BE_REPLACED

I’ve been running ConneryBeagle in agility for…well, nearly that decade (although he obviously wasn’t competing in those first training months).  He’s almost eleven, winding down his career, and basically has the skills he’s going to have.  I keep him tuned up, but am not introducing new agility things.

That doesn’t mean that Connery doesn’t introduce new challenges to me. END_OF_DOCUMENT_TOKEN_TO_BE_REPLACED 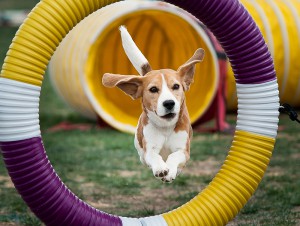 Anyway, you know the courses I mean.  During walk-through half the handlers are grimly unhappy and the other half are quite blithely and vocally certain that those who are unhappy would in fact be happy if they had only trained properly (or completely, or with the right system, or…). END_OF_DOCUMENT_TOKEN_TO_BE_REPLACED

But if it was the only marker of success, I can’t imagine many of us would keep training, keep entering…keep running.  Keep on with our little public humility lessons.  Because with some dogs, those placement ribbons never come, and with others, the Q ribbons are a rarity, and with still others, the lessons in humility are ongoing. END_OF_DOCUMENT_TOKEN_TO_BE_REPLACED

Agility milestones for Connery Beagle!  Now that he’s earned a MACH3, Connery is running in Preferred classes (that is, jumping four inches lower).  He was always the shortest and heaviest dog in his jump height…Beagles are meant to be sturdy little things.  And he likes it Very Much!

He’s qualified in eleven of his twelve runs since then, and taken first place each time.  At ten years old there’s no telling how long he’ll have this much joy in running, but right now we’re having a blast with it! 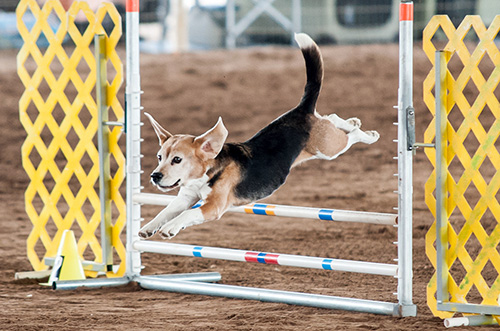 Now, anyone who’s gasping, “She puts her puppies over jumps/on the a-frame/dogwalk/WHUTEVER” should just slap their own heads.   Just pause right now and take care of that little chore for me.
END_OF_DOCUMENT_TOKEN_TO_BE_REPLACED