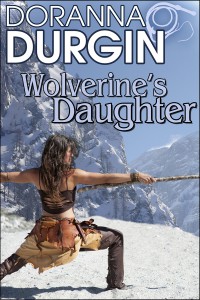 Daughter of a legendary warrior who left the mountains before she was born. Brave. Strong. Tempered by her struggle to survive in the hostile, craggy Keturan mountains. And plagued by moments of enormous and puzzling clumsiness.

“Find your father,” the local wisewoman tells her. “To find your true self, find the Wolverine.”

Angered by his abandonment, Kelyn doesn’t care about her father–but the lure of adventure in the Out Lands calls to her, just as it called to the Wolverine before her, and she accepts the challenge.

New languages, new weapons. Magic. Witch hunts. The treacheries of civilization. She doesn’t know just how much of a challenge it’ll be.

See also Emerging Legacy: A Story of the Wolverine’s Daughter

“When a sword and sorcery book begins with humor, it’s fairly well guaranteed to be an excellent read…. This book whips along with impressive fight choreography, excellent background descriptions, and fascinating plotlines.”
–Kliatt

“With this new book, Doranna Durgin ventures into classic sword & sorcery — and turns the subgenre upside down…. And I like Kelyn, who could kick Red Sonyas steel bikini-clad butt from introduction to epilogue. Fantasy fans in general will love this book, but it has extra appeal for feminists and for warriors of the female persuasion.”
–Hypatia’s Hoard 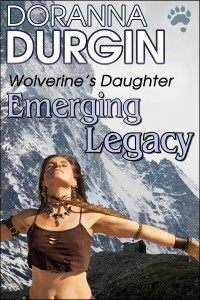 A Story of the Wolverine’s Daughter

The slavers who capture Kelyn’s youthful hunting pack also threaten her village–which depends on the meat and trade pelts the pack brings in from the harsh land of Ketura. But except for Kelyn, the pack is drugged…and Kelyn’s nickname is Kelyn the Clumsy…