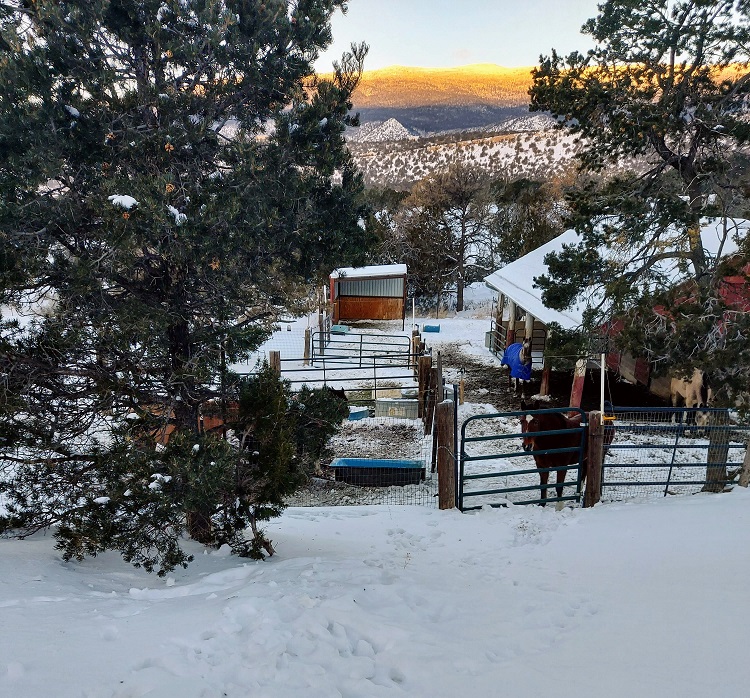 After the first part of the storm.

On Saturday 2/13 in the afternoon, it was 50 degrees F, and I rode Joey and pushed some cows while Heidi rode Lucy so Joey had a mentor (and she practiced other stuff on Lucy). Then, I had a fine time working my two yearling bovines with Lucy out in the pasture. She had some fun moves! We also practiced slides-getting up to about 10 feet semi consistently…

When I was done, Heidi noted that I’d lost a bell boot off Lucy. Heidi offered to cool out Lucy and they spent a good long time searching for that thing! It is black. Looks a lot like dried cow manure. It is still missing, but Lucy appreciated the cool out. (Thanks, Heidi!).

Then it was Landon’s turn. He was very focused and cadenced and long-strided! This was wonderful, all by itself, but even more impressive because the wind got colder and colder and began to really whip across the plain as the edge of the Polar Vortex event started moving in. He rode the same the whole ride!

Heidi helped me untack and get ready to go. To load, I held the heavy trailer door against the wind and she led them in. Then we went to see the baby lambs. They are just a few days old and are, of course, darling. One of them may well end up in my freezer at the end of the year, as have two previous Tucker lambs.

You know, I am perfectly fine not having a close personal relationship with my dinner meat. I will avoid socializing with them as they get closer to market weight.

The lambs had a heat lamp and were possibly headed into the house for the Polarized night.

I drove Heidi back up to the house and, disaster was barely averted, by sheer luck. I grazed a (marked and covered) major water outlet with the trailer. I was blabbing to Heidi and did not even see it. If I had busted it….just as the Big Freeze was blowing in…. I shudder to think. Whew.

When I got home to our place, in a rincon, at the base of the Sandia Mountains, there was very little wind and it was not yet so cold. Only twenty miles from the Tucker’s, but what a difference!

In February 2011, we had a longer Polar Event with temperatures as low as -25 F.  There was snow but not a lot of wind. No horses were blanketed and none were cold.

Horses have a counter current circulation system in their legs, so as the colder blood returns from the legs to the body, it goes right by the hot blood coming down. This helps warm the returning blood. Dry horses, out of the wind, with a good winter coat and adequate feed can withstand very cold conditions  (-30 to -40 F), according to Heather Scott Thomas.

This time, snow, along with strong winds were forecast, which had me a little concerned.

Jim had topped off all the water including the 500 gallon stock tanks, and by 8pm the temperature was falling, as was the snow.

Three horses were blanketed (two are always blanketed for show coat purposes and I just felt better blanketing the third, although I suspect he would have been fine).

I fed extra hay for the night, but while we have shelters, we do not have stalls, so everyone was “out”.

In the morning it was 3.4 degrees F (slightly warmer than predicted), and we had 5 inches of snow.

The horses were, as usual, NOT under shelter. They were standing in the falling snow with snow sprinkles on their backs. I think it is so amazing that in 3 degree weather, the horse’s coat is so insulative that snow just an inch from the horse’s warm skin does not melt because so little heat is escaping! No wonder they can withstand such cold temps!

No one was shivering!

And, in another interesting bit of physics, NONE of the water tanks were frozen, despite hours at sub freezing temperatures. 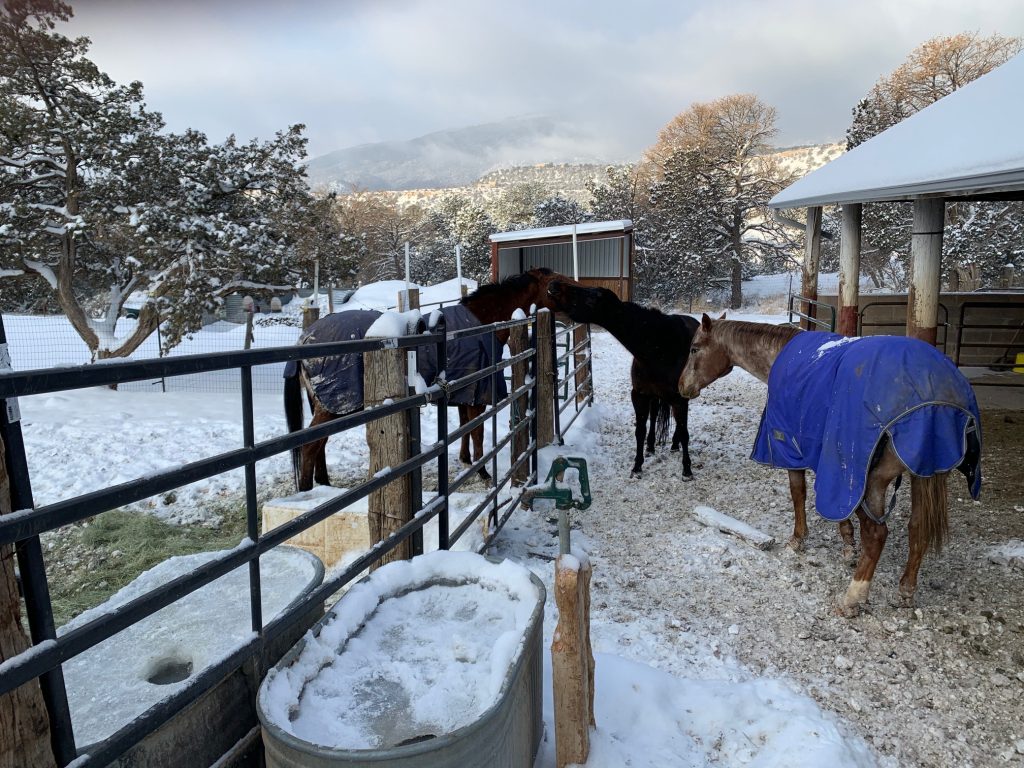 Mushy snow insulation on the water tank. You can see the nose holes!

Water has a high heat capacity, which means it does not change temperature all that fast. Water molecules like to stick to each other via weak hydrogen bonds, which contributes to its heat holding capacity. 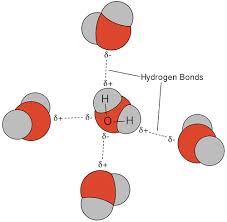 “Water can minimize changes in temperature...The land cools faster than the sea once the sun goes down, and the slow-cooling water can release heat to nearby land during the night. Water is also used by warm-blooded animals to distribute heat through their bodies: it acts similarly to a car’s cooling system, moving heat from warm places to cool places, helping the body keep an even temperature.” (Khan Academy)

Our tanks did not freeze because it was 50F on Sat, Jim had just filled the tanks, and it snowed.  So, the water was relatively warm, and since solid water (snow, ice) FLOATS, the five inches of snow actually formed an insulative layer of mush on top of the liquid water.

High temp on Sunday was 10F and it was 9F Monday morning, so by Monday, the water had formed ice, but still not very thick.

And one more thing….The fact that ice floats is unusual.  Most solids are more dense than the liquid form of that molecule, thus most solids sink.  If ice sank, fish in lakes would get squished in the winter and water tanks would freeze solid much faster. Life is sustainable due to the amazing properties of water! (Another link to the Khan Academy!)

Monday was nice, but it snowed another 5 or 6 inches on Tuesday. And a little more on Wednesday. 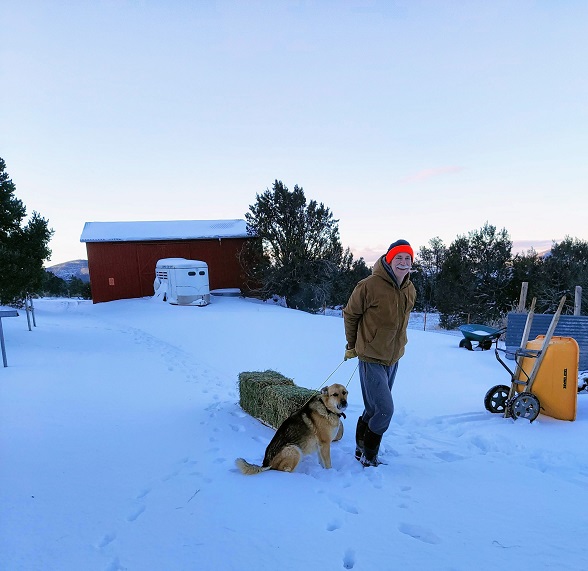 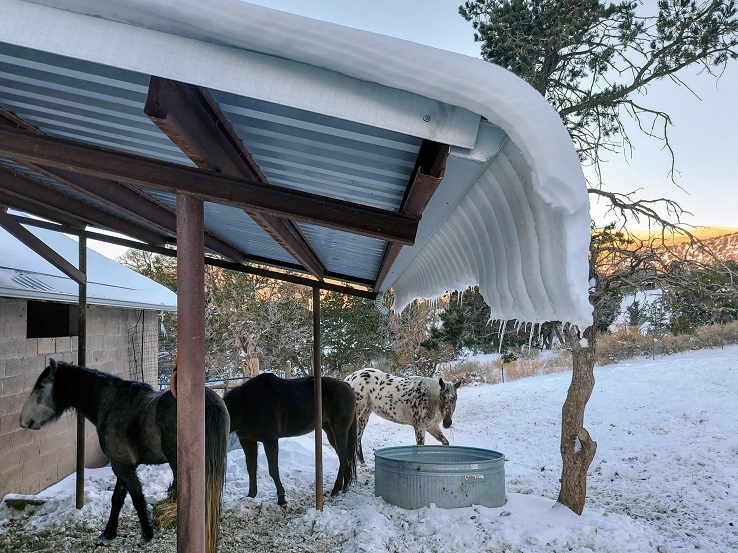 I am getting a lot of computer work done, but no riding, as the footing is still bad.

Hopefully will ride today, as it might hit 40F, is forecast to be sunny, and I have dragged the arena multiple times, to expose some dirt and turn the remaining snow brown enough to absorb those photons and clear off!!!

5 Responses to “A Polar Vortex Event”