On our way home from the 2020 Appaloosa World Show, Shelley said we should stop at a metal art shop.  Good choice!  I bought the Pink Flamingo! (You never need a reason to buy a pink flamingo.) 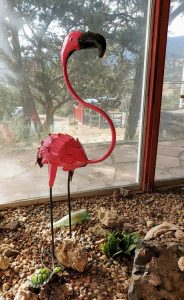 I am quite enamored of the Pink Flamingo, so, what the heck, I bought shirt to match!

Last weekend, The New Mexico Buckskin Horse Association had a shaggy show and I had the chance to use it.  It is a fun shirt to wear! It made people smile! 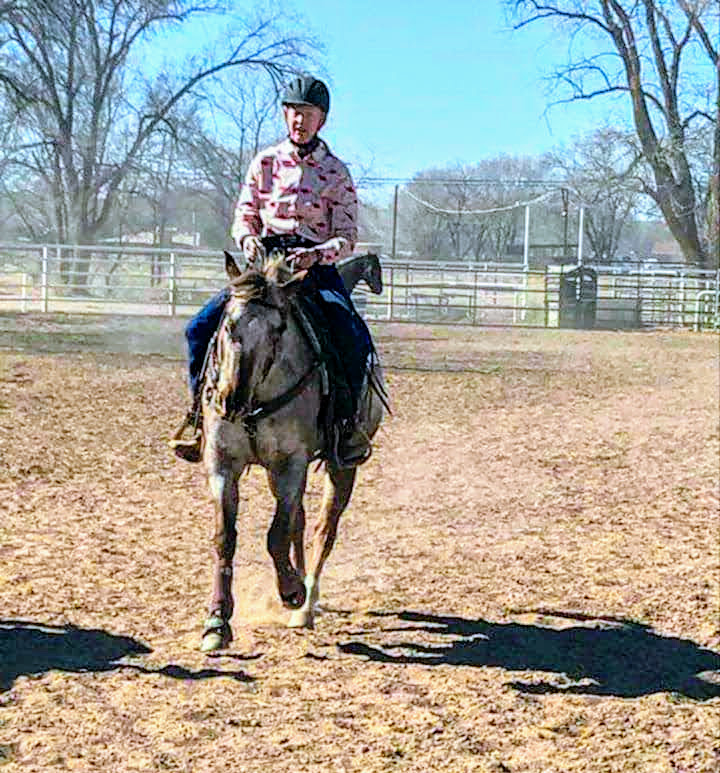 Lucy and me in the pink flamingo shirt with a horse head coming out of my buttock! Photo from the NMBHA Facebook page. I think Craze took it, but am not sure.

The weather was warm and not windy. (It has been annoyingly windy of late.) It was so nice to see people I have not seen for months! It was a good sized show, too, with classes as big as 20 entries.

One of our highlights was Ranch Rail. Based on my coaching from Cody at No Where But Up Performance Horses, I went for consistency (“The key,” he said, “is to try to look The Same every time the judge sees you.”)  Lucy delivered a really nice, super steady trot and a pretty steady lope, too. (Got 2nd of 14!)

We also did ranch cutting, and we got to settle the herd of previously Ranch Sorted calves. They took a bit to figure it out, but ended up working whole lot better than I thought they would.  Last time I tried to cow horse calves that had been sorted, they had tendency to run off at full speed, headed for parts unknown.  Having herd holders really helped those calves consider finding the sweet spot on the fence instead of going AWOL down the pen!

In the cutting class itself, I dragged Lucy around a bit more than I should have (because I did not trust her to do her job–I felt I rode better in the boxing).  In both cutting and boxing, we had some nice moves, placed well, and got some compliments, too!

Our other classes were ranch trail (I really like trail), ranch riding, stock horse, reining and barrels!  We had a bobble in ranch riding but placed 1st to 5th in everything else.

In barrels we were third! First was 19 something seconds, 2nd was 19 something and then there was me with 28 something, followed by two others with 29 somethings!  In other words, there were just two actual barrel horses.

I entered barrels to let Lucy practice running.  Clearly she is not a speed demon, but I have to say, she did not get all amped up (because she never gets amped up!), had no trouble turning the barrels, and she did a sliding stop to finish the pattern!

The next  NMBHA show is March 7th, and then there is a big (well, we hope it is big) Western States Desert Classic Appaloosa/Pinto show in Arizona the first weekend of April! 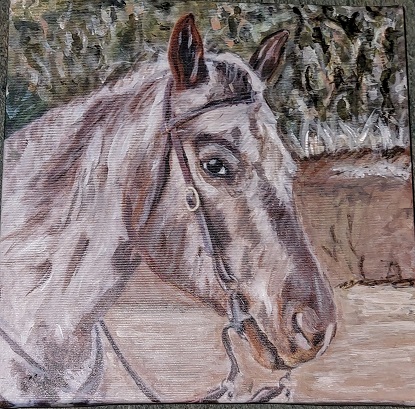 Portrait my neighbor did of Lucy! She surprised me with it on Thursday!

This pony is going to go to both!

7 Responses to “A Pink Flamingo Day”