This week has been a bit wintery pre-winter (since winter officially begins 12/21).  It has been cold (for us). Some days were not above freezing, others were barely above.

There have been a few days without much riding, but mainly, it has been ok, so long as I was wearing the right number of layers– which means four or five, being the cold averse sort that I am!

Here is a little run through of some of the fun we had! 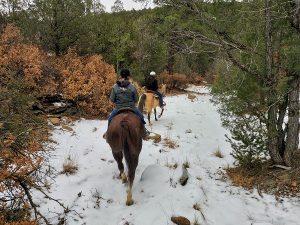 Cold ride in the canyon next door with Jordyn on LT and Maddie on Leo! Jordyn was a popsicle.  She says she is taking a vacation until it gets a little warmer! Not enough layers, obviously! LOL! 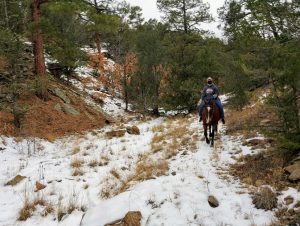 Kate on Amigo. Kate just moved to NM from S. Dakota, so, cold shmold for her!  Kate’s hands were even a little too warm! I rode Jack, who belongs to Sheryl L. My feet were a little chilled, but other than that, I was ok.  Facemasks actually felt nice–my nose did not get cold! 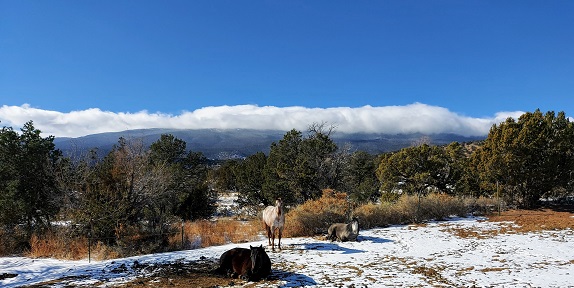 L to R: Breeze, Lucy, Sombra. Just a moment earlier LT (buckskin) and Cometa (light bay) were over there, too, and that was a lovely look, but as I came in to take the picture, those two got up and came over “whatcha doing?”. “Trying to take a picture of you all!” 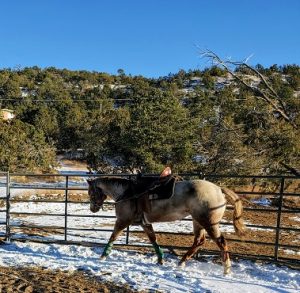 Lucy doing a little work on her trot in the round pen! 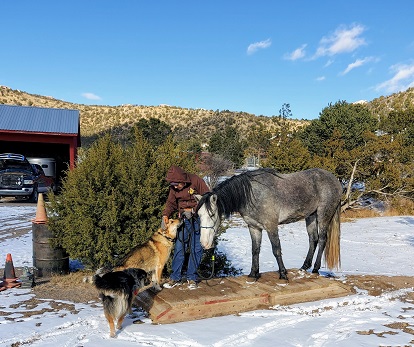 Mary Ann and Sombra, with the doggie help, Lani and Coulson. Sombra was cracking us up earlier when Mary Ann was doing side passing over a log. She would barely get him set and he was already doing it, with a little, “i have totally got this!” vibe. What a charmer he is! 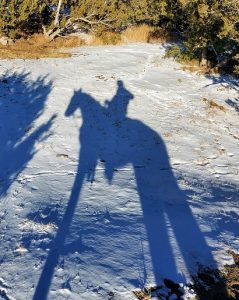 Jack practicing the bridge. The shadow was so pretty I just had to get a picture!

All in all, a fine week.

Lucy and I are going to see H this weekend, in Colorado, so I posted early.

Next week will be the annual Christmas Hats blog and then the always interesting (due to the random rhymes) Year in Review!!