Jack, who belongs to Sheryl L., is my latest colt start.  Thank-you Sheryl! Jack got his second set of shoes ever and his first set of hot shoes Thursday! 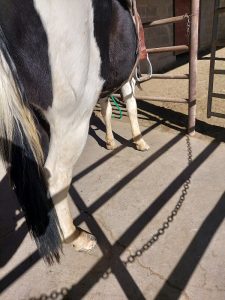 He was very good, even if he may not have been all that excited about the sizzling as the hot steel was laid on his hooves!

I was excited he was getting shod because he has been mentally ready to go out on the trail for a week or so, and he needed a good set of shoes to do it.  I mean, we are talking hoof shredding Steep and Rocky around here.

Jack can be a bit tense about new occurrences in life, so I took a little bit of extra time with his early work to make sure he trusted me enough to let me push him through his worries, without blowing up.  I am so proud of how hard he is trying, and I love that his innate sweet personality leads him to doing his best and not towards pitching a fit.

Thursday was his 23rd ride and I hopped on, and took him right up the steep steps that some horses (and riders) find intimidating.  It really helped that Jack was with his mentor buddy, Leo (Maddie riding).  Jack not only can negotiate tough terrain, he can also walk, trot and lope out there. And he was willing to lead a good part of the way home.

It is true that he was a bit stumped by a small dip in the trail and he had to jump it (with a little hop, not a ginormous fly over).  He also is not 100% on board with riding solo, but no worries.  It was his second trail ride ever! 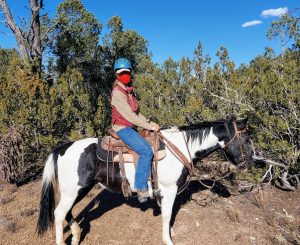 Who is that masked rider? Thanks Shelley for my cheery cherry red Appaloosa logo mask!! Jack stood well for the photo! Good boy!

He is very good with his foot placement and watches where he is going. Yes, sometimes he is watching a bit too closely to everything, everywhere, but that is partly because that is his nature and also because he is three and still in the Lookey Loo phase.

I find that the second and third months of training are a lot of fun because as the youngsters gain confidence and they can learn so much so fast!

Be kind. Be safe.

5 Responses to “New Shoes and a Trail Ride”